The books you buy sight unseen because…

“A Brightness Long Ago”

There are a few, a very few, authors whose new books I buy sight unseen just because A NEW BOOK EXISTS THAT THIS AUTHOR HAS WRITTEN. Guy Gavriel Kay is one of those authors.
When I found out about the coming of “A Brightness Long Ago”, I immediately preordered the hardcover.
Guy Gavriel Kay isn’t something you gulp and swallow. He is something you sip and savor. He always will be. This book is no different. But “A Brightness Long Ago”… is not precisely something that is altogether “new”. It is in fact a prequel to another Kay novel, “Children of Earth and Sky”, which came out in 2016, and because of that I then went straight on to re-read that other, older, novel, because of course now it rested on far more solid a foundation. And I will be using that re-read for a Writing School post, shortly, for those of you who follow that level of the Patreon. Suffice it to say that it will have to do with that vexed vexed question about what is “yours” to write about.
But in the meantime, “Brightness”. 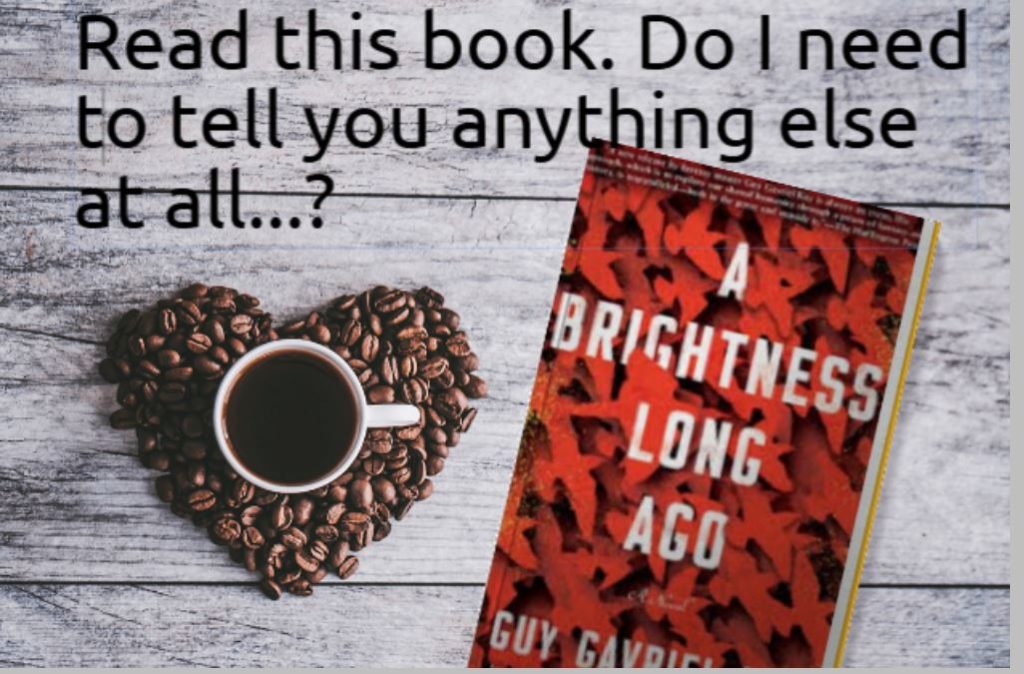 The thing about Guy Kay’s alt-history novels is, they don’t read like they were made up. You wrap this other world – the world that doesn’t exist except in the pages of his books – around you, and you cease to believe that any other world has ever existed. These books don’t read like they were INVENTED. They read like somebody somewhere lived them, and as though this alternative Earth, alternative Universe, which has enough divergence points from ours to make it completely possible to understand that we are not talking about our history not only existed but that it somehow DOES exist even now and is it possible that our “real” lives, the ones we return to when we close the covers of these books, are the ones that are truly ‘invented’ and this other thing that we have been immersed in, that is the true reality and it is THAT reality that our current one should be based on.
One would wish. Quite possibly the alternate historical past led to a different and probably better place. It is tempting to think of a timeline where our current 2020 is so… so… DIFFERENT.
Kay’s characters are not made of the paper they are printed on, not even of the words in which they are described. They hurt, They triumph. They fail. They struggle. They betray and are betrayed in turn. They live. They DIE. Being an important character in one of Guy Kay’s books doesn’t mean that you’re exempt from dying, that your survival is assured. On the contrary. You are probably stepping up to the firing line to take your chances. Guy Gavriel Kay doesn’t coddle his characters. He TEMPERS them. What comes out at the far end of that is either fine steel or ashes – and it seems to me as though it is not Kay’s decision as to which, it is the character’s own fiber that determines their fate. Dammit, but these are real people. And if they weren’t, they ought to have been.
The plotline of “A Brightness in the Sky” is not stunningly original to be sure – but it does not have to be. Kay’s gifts are not in reinventing the wheel. They lie in looking at a wheel we are already very familiar with… in a very distinctive new way, noticing details we may not have noticed before. The story may be familiar – but the way this master storyteller TELLS that story is what keeps me coming back to Guy Gavriel Kay for more and more and more and here I am, waiting for word on his next book. Which I will buy, sight unseen, the moment I know its name.
Do I have to tell you the details about the plot of “A Brightness in the Sky”? Do I have to tell you about an ancient rivalry between two strong warlords in a time of strife, and about how it ruins lives in its wake, and about how it brings about redemption in the end – even though the price of that redemption may be high? Do I have to tell you about a story where men and women may fall in love with inconvenient people – where relationships which may never be ‘consummated’ in the classic romantic tradition end up being more powerful and more important and more cherished in memory than any romantic clinch might have been? Do I have to tell you any of this stuff, if I tell you that this is a story of rich and tangled lives in a rich a tangled historical setting, and that it was told by Guy Gavriel Kay?
Do I have to tell you that I find this man an inspiration, and that whenever I read one of his books, I ACHE to write…?
Do I need to tell you to read this book, if you are at all of a mind to love a beautiful story well told, if you are at all here because you might like the stuff I write (because this is the sort of thing that I try to do with my books…)?
Do I need to tell you ANYTHING else at all…?