The Day of the Wolf, Reprise

For those who follow this page and this blog in any  consistent fashion at all, you might remember this post – the day I first encountered the wolves down in Anacortes, and my incandescent relationship with them.

My first Day of the Wolf was now more than two years ago, astonishingly, but THIS year, 2021, has been dark and dreadful – after losing my husband in February I have been stumbling around in a deep forest so gnarled and ancient that underneath it there is nothing but shadow, and the occasional glimpse of sun is almost miraculous when it occurs – or else I have been swimming desperately, trying to stay afloat, in an ink-black ocean with only horizon all around me and no land in sight. Exhausted, mourning, in pain, I sought that glimpse of sunlight in the dark forest – I made for a remembered island of happiness.

I headed back to the wolves.

My second Day of the Wolf was balm for my wounded spirit, and a sort of birthday present for myself (I went on July 6, the day after). When I got there, this time, the tranquility of the sanctuary was shattered by a lot of noise and activity and the group that I was in was informed that a large maple had come down the night before, and they were busy taking down the dangerous remains with ropes and chainsaws. I could only imagine what the resident animals must have been feeling about this, and I found myself hoping that the entire experience wasn’t going to be marred by it – but the first critter we saw, a sloth they brought out of the sloth house to entertain us outside on the rope jungle jim they set up for it, seemed unperturbed by it all in a very zen slothlike manner. He just hung out there (literally) and chilled. They really are the most extraordinary creatures – and in other circumstances, in other contexts, he would probably have been far more fascinating – but I don’t come here, or pay the big bucks, to commune with a sloth. He was fun and interesting and actually rather sweet – but I was eager to move on. 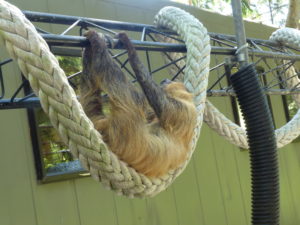 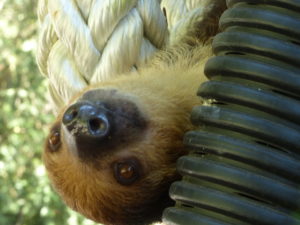 The tour continued. We saw all the other critters that they had there. We saw a bobcat suffering from depression (he had been owned by somebody who had to give him up when ordnances changed and he  (the owner) was told he had seven days to get rid of the cat or to euthanise it but he would no longer be permitted to keep the “wild” animal on his suburban-ish property – he handed the cat over to the sanctuary instead, and it went into a deep funk – they actually had to tell the ex owner to stop visiting  and reminding the cat of himself because every time he left the cat would have a relapse of the blues…). We saw the resident emu, loose and wandering the grounds, and he tried to grab my camera (“he likes camera straps,” we were told, by our resigned guide). We saw a cougar eating lunch. We saw the little old blind fox I remembered from my last visit, still here, still perky, still doing OK, but (as we were informed) he was developing what might be his last illness. It’s a shame, he’s a sweet creature. We saw a giant anteater who was so agitated by the whole tree-falling-down thing that it was pacing its enclosure in a manner that made everyone stand well back from it; we were told it was a sensitive creature and it would take hours to calm down from this insult to his senses. We were shown the groundhog, the possums, the skunk, and a brace of rescued raccoons.

And then we went in with the young wolves.

The animals had apparently suffered badly through the heat wave that just smote Washington – the sanctuary had sprinklers turned on full time and the wolves (who are in theprocess of shedding the heavy winter coats) practically lived under water for those few days. At least a couple of them were still listless enough not to make a showing at all – but some of the ‘friends’ I remembered from last time did appear – curious Willow who wanted into everyone’s pockets to find out what was there, black Luther with his golden eye who’s been my phone’s home screen ever since I first took his photo, Echo, a few others. We spent some time with them, scritching them where liked to be scritched, one of the women hauled out double handfuls of shed fur from WIllow’s coat and they looked like they could have made a whole other wolf there was so much of it. I took a shot of a wolf enjoying the attention but the expression on his face was pure Wile E Coyote wondering what he had done with his anvil.

And then we went into the wild run, to meet up with Max and Cacoa, the pair I had met the last time I was here, one of whom had given me wolf kisses. Out they came, and oh, they were everything, yet again. I love these creatures so much. I got another quick lick – from both of them, this time – and then Max floomped over and stuck a massive paw out, bracing it against my shoulder, as I rubbed his belly and his expression melted into pure doggy bliss. 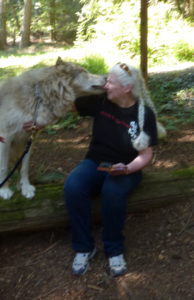 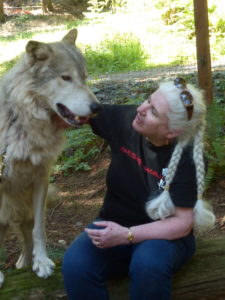 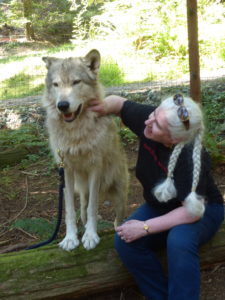 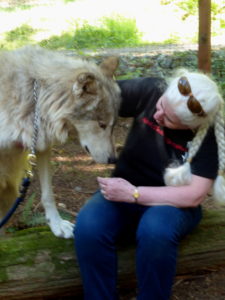 My two hours here melted away into what seemed like minutes, and then it was all over, again. Out we all trooped. The wolves loped off. We all washed out hands (these things are dustier than you can posibly imagine!) and then it was time to leave, and go home, home to where this time nobody waited to be told of the joy and the excitement of it all.

For two hours I was in that patch of sunlight, resting on the dry ground of that island in the middle of the empty ocean. For two hours I could forget about the rest of my life and my troubles and my sorrows, and drown in wolf eyes (and really, everyone should find themselves somebody at whom they look like I look at that wolf in the pictures I have with him…) And then I was home again, with only the memories.

Maybe I’ll start putting aside money right now, for financing another trip up there in a couple of years.

These wolves are a sanctuary for my soul.

One thought on “The Day of the Wolf, Reprise”