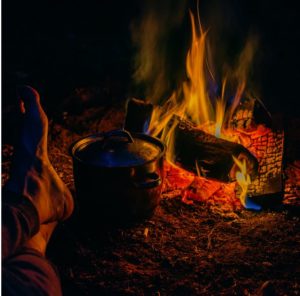 It was my husband, whose own cultural heritage includes the Depression in the United States, who first told me the story of the hobo and his stone soup. As the story goes, the hobo turned up at someone’s home and asked if he could light a fire in the yard so that he could make himself some soup. The lady of the house who had agreed given him permission became curious when she observed the cooking preparations – a pot over the fire, containing nothing but water, and then a carefully lowered in a smooth stone.
“Is that all you eat?” she asked the hobo. “Surely you can’t survive on it?”
“Oh yes,” the hobo replied. “Of course, I add other things when I have them – a few vegetables added in thicken the soup.”
She fetched an onion, some cabbage, a turnip, and carrots, and gave them to him. He solemnly thanked her and cut them up into the water.
“This will do just fine,” he said. “Sometimes I add a bit of meat – just for flavor – but of course that isn’t at all necessary…”
She got him a piece of chicken, and he cut that up and put it in the soup too. He mentioned that a little salt would make it more tasty and she brought both salt and pepper.
When the soup was done, he invited her to try it, and she was astonished at what she was offered.
“Why, it’s so good!” she said in wonderment. “And to think that it all came from a stone!”

Back in 2000 I wrote down a page of thumbnail character sketches; my husband (the same one of the stone soup story fame) asked what those were, and I said, my next novel. He said, I hate you (he always says that when I snatch a novel out of thin air). And then he asked what it was about. I said I didn’t know, yet.
A short while later a friend sent me a link to an article about nushu, the women’s written language of China, taught for generations from mother to daughter – the women’s language, the women’s country, the women’s culture and all that went with that. The article was about the last living user of that language who had learned it the traditional way – at mother’s knee – dying at age 90+, after which the language would become a relic, a memory, a dream of women.
My nameless, countryless characters on that list of thumbnail sketches sat up and said, oh yeah, that’s us.
I began writing a historical fantasy of a mythical country inspired by China, a country I called Syai (to be honest and revelatory about it, the name is a transliteration of a word in my OWN language which literally means “shining”; it was my own Easter Egg in the story, known to me but not to anyone else.)
I created a story about a women’s language, inspired by the real-life nushu, and a legend of a far-reaching sisterhood of women not bound together by class or status but only by an unbreakable vow to each other.
I was NOT writing about the real China. I used the idea of the women’s language of China as inspiration for a story all of my own and set in my own world of Syai.
That the inspiration was real, never doubt. I wrote “The Secrets of Jin-shei” at white heat, producing almost 200,000 words of nearly perfect first draft in less than three months, a feat I had never done before – or since.
This story was a gift, and one I received with humble gratitude… and that I believe I did justice to. One woman came up to me at a reading and asked if I would sign the copy of the book she held to her adopted Chinese daughter, which was tribute enough, except that she then said, “I will give it to her when she is old enough to understand, maybe when she is 15 or so.” I asked how old the child was now, and the mother said, “Four.” I cried.
At another reading an elderly Chinese woman with timeless features and neatly pinned back gray hair, told me she loved the novel and wistfully added that part of her wished that I was Chinese. I took that as an enormous compliment.
The book flew – it was translated into more than a dozen languages, around the world; eighty thousand people bought its Spanish HARDCOVER edition in the space of the first six months of its release.
It was stone soup – EVERY story ever told is stone soup.
In this instance, the stone in the soup was those ten character sketches which didn’t know what to do with themselves. But add in the metaphorical vegetables and a bit of meat for flavor – and you get something rich, and nourishing, and unlooked for.

One thought on “Stone soup and grave robbing”