It takes a story to explain a word

Foreword to: Untranslatable by Alma Alexander

Ethereal. Enchanted. Often magically powerful; frequently, hopelessly inadequate. Capable of building castles of clouds, turning lead into gold, making you hear a color or see the sound of the whispering wind in the silver shivers of aspen leaves. Capable of painting pictures without the touch of a brush or any paint at all, capable of building worlds without wood or water or stone, capable of making dreams solid enough to be touched and caressed, or of nightmares real enough to steal your breath away. 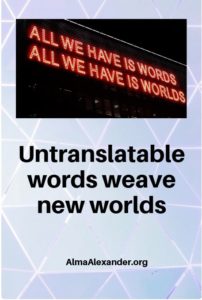 Language is such a heady incense for me, fragrant and glowing and vivid and bright. When I write, I tend to use words that people are sometimes forced to look up. I speak of the susurrus of wind tossed leaves; I know what petrichor means; I can use – properly and accurately – words like actinic, and etiolated, and flense.
I was very young when I first fell in love with the word, and your first love lasts forever.
And this love, for me, only deepened as I grew older, as I read more widely and more deeply, and as I began to write my own words, shape my own stories.
There were side roads that branched off the main thoroughfare of the language that I was using to do so, other languages, languages that spoke of other cultures, of delightfully strange and unfamiliar concepts and ideas, for which sometimes the primary language I thought and wrote in had no simple equivalent.
I had entered the Untranslatable Lands…and nothing would ever look quite the same again.
It becomes, at some point, impossible to see or experience something and not wonder how it might appear to someone who is not you, how a strange and different pair of eyes might interpret something that is utterly familiar to you or just how lost in translation a concept that seems simple to somebody else can become when you try to understand it from your own perspective.
There are words in other languages which require whole sentences, sometimes whole paragraphs, of explanation in English. And the attempts at translation transcend the language-to-language direct parallel lines. There are times when it is necessary to adjust one’s entire understanding of the world to fully understand a concept which can at once be simple to one mind and unutterably complex to another. 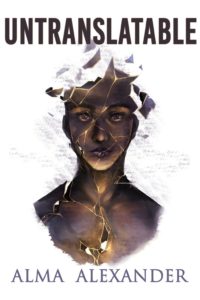 That is one axis on which this collection rests – the attempt to take an Untranslatable Word and to attempt to give a glimpse into its bigger meaning through a story.
The story is not *about the word*. It is about that untranslatable concept behind the word. It’s all about the quiet stab of comprehension – the Oh! I see it now! moment in which understanding breaks into a reader’s mind like the light of dawn cracking the edges of shadowed and unfamiliar landscapes and illuminating something that is almost, almost, almost within their grasp.
It is a literal journey, into language landscapes of Japan, of Sweden, of the frozen wastes of the far north where the Eskimos roam, of France, of Portugal, of Tierra del Fuego. A glimpse into the worldview and the mindset of cultures different enough from our own to produce a single word that encompasses a world of concepts.
The other and somewhat unexpected axis turned out to be that of time – because these amazing, astonishing, delightful, enchanted words seemed to fall naturally into categories which indicated a quickening anticipation (a beginning), a startling awareness of the moment in which one finds oneself drawing breath (the middle) or a quiet looking back on things that were but no longer are, often sorrowful and regretful, sometimes melancholy, sometimes just coupled with a pang of a sense of something that’s passed away (the end).
And so the stories in this collection found their place in space and time and language.
Translating the Untranslatable.

Get your copy of Untranslatable HERE