Writing in the fantasy ghetto

A few months back I was asked to take part in a reading series. I said sure, and asked if they had any criteria as to what was to be read, noting in passing that I am primarily a fantasy writer.
I got back an apologetic email telling me that the academic authority behind this new project wanted only “literary” writing. No fantasy. No genre.
I was taken aback by the unspoken assumption that “literary” writing is somehow superior. It is, of course, just another genre, although I refrained from pointing that out to the organizers. I also refrained from explaining to them the obvious – ALL fiction is fantasy, some writer made it up.
I write fantasy that’s “literary” enough to stand against any work of literature that you choose. While I can understand the intention of an academician to keep out the REALLY out-there fantasy stuff, would he really throw out most of Tolkien, and his totally invented LANGUAGES? Or Guy Gavriel Kay? Or Ursula Le Guin? Or Neil Gaiman? Would he throw out the Odyssey, because it has Greek Gods in it?
I get so tired of this.
There is writing out there that is BEAUTIFUL. It is still beautiful even if it has a dragon in it. Sure. there is plenty of penny-ante fantasy which can and frequently does get blasted for overuse of tropes in bad ways (I’m looking at you, “Twilight”). But the proper criterion isn’t whether or not something has a fantastical trope in it, but whether it is GOOD WRITING.

‘Literary’ is just another genre

A good deal of ‘literary’ writing is equally bad. Literary is simply another genre with its own conventions, own tropes, and with a wide range of writing quality.
Where DOES the line get drawn? Is anything without something supernatural in it ‘literature’ by definition? By THAT definition, “50 Shades of Gray” is LITERATURE, and Ursula Le Guin isn’t. Writing about love and friendship is writing about the human condition – and I am bewildered by the fact that it isn’t acceptable as literature if it takes place on a different world than the one you’re standing up in, but IS acceptable, presumably, if it takes place in a rich man’s secret S&M playroom in a Seattle penthouse.
Please explain to me what disqualifies the works of some of the greatest literary writers the world has ever seen from writing ‘literature’ while things that are barely writing, qualify on the strength of the fact that some authors apparently didn’t have the imagination span to take a small person out of a small place and tell a BIGGER story?
Again, all fiction is fantasy by definition because every book of fiction is a passel of lies, otherwise it wouldn’t be fiction, but memoir, or biography, or some other non-fictional species. 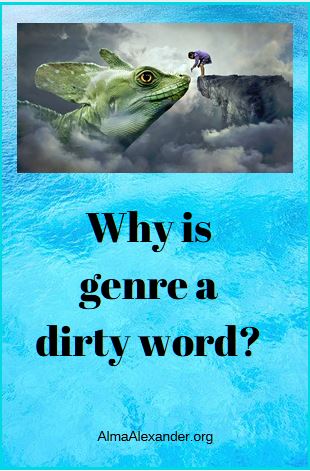 No dragons? Silly rule, but OK

I can understand perfectly that a reading series can set their own rules, ‘no dragons’, for example. I might still have issues with it, but I can understand it. But to dismiss fantasy from ‘literature’ because someone in an ivory academic tower feels that it is somehow beneath them?
Two of the best-known fantasy writers ever, J R R Tolkien and C S Lewis, were college professors. What are you going to say to them – that their work is somehow… beneath you?
A friend writes on Facebook suggested, “Tell them that means that A Midsummer Night’s Dream and The Tempest are out. Ditto Doctor Faustus. H.G. Wells? Nope. Gulliver’s Travels? Hard pass. A Connecticut Yankee in King Arthur’s Court? Sorry; no fantasy allowed. No Pygmalion. No 1984, or Animal Farm. No Iliad, Odyssey, Christmas Carol. Goodbye to Kafka, Bradbury, Carroll (Lewis AND Jonathan), Spenser, Atwood, Butler, Calvino, Verne, Lessing, Wells. Books by Steinbeck, Updike, Wilhelm, Lethem, Chabon, and on, and on, and on…”
Yes, this. EXACTLY this.
I write very literary fantasy. It isn’t just the disinvitation from a reading series because I am somehow perceived as “lesser than” that disturbs me. It’s something much bigger, I belong to a tribe of luminous writers who are being sniffed at by people who really may not know any better. Does anyone have any ideas how to stop this blight?
~~~

Being disinvited from the local reading series, had an unexpected and surprisingly positive outcome. It goaded me into doing my first podcast on Facebook.
I read two stories from my current WIP (fantasy, naturally).
Podcast link HERE
It was so well received, I’ll be doing others. My husband and taskmaster is demanding that I do them regularly. We’ll see. Stay tuned.
~~~
Dragon Image by KELLEPICS on Pixabay
~~~
If you’d like to read more of mine – please go to the top menu and look under “My Books” for a range of reading material. And do consider sticking around and joining the Patreon family here.
Share this: