When the experts speak … nonsense

“A century ago when my husband was a youngish man he spotted a book in the library called ‘The Experts Speak’, filled with wonderful stories about “experts” who regularly made pronouncements that, in retrospect, they really shouldn’t have.
It was a delightful book that he coveted for himself but couldn’t afford at the time. A few months later he saw a copy at a library sale for price he couldn’t pass up – 10 cents — and acquired it.
The experts, it seems, have been wrong about everything — space, the sexes, the races, the environment, economics, politics, crime, education, the media, history, science… Or life, the universe and everything.
Since my husband never has been overly impressed by experts, particularly those of the political variety this year, he loves to quote from it. 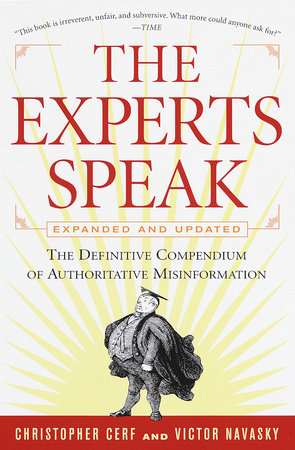 Some examples he has shared with me include:
“There is no reason for any individual to have a computer in their home.” –President of Digital Equipment Corporation, 1977
“Forget it, Louis, no Civil War picture ever made a nickel.”
–Irving Thalberg’s warning to Louis B. Mayer regarding Gone With the Wind.
There was one quote that he knew better than to cite to me:
“Nature intended women to be our slaves. They are our property. They belong to us, just as a tree that bears fruit belongs to a gardener. What a mad idea to demand equality for women! Women are nothing but machines for producing children.”  — Napoleon Bonaparte
Unfortunately, too many politicians today seem to believe that, even if they don’t dare admit it out loud.
I have been more interested by what various people have said about books, authors, and everything literary.

“I’m sorry, Mr. Kipling, but you just don’t know how to use the English language.” Editor San Francisco Examiner, 1889
The Saturday Review, London cited Charles Dickens this way. “We do not believe in the permanence of his reputation.”
Le Figaro’s reviewer said of Gustave Flaubert, author of the immortal Madame Bovary, “Monsieur is not a writer.”
The eminent critic Clifton Fadiman in one of his reviews of a William Faulkner novel called it, “The final blowup of what was once a remarkable, if minor talent.
The literary goddess Virginia Woolf wrote of James Joyce, “I finished Ulysses and think it is a misfire.”
The Southern Quarterly declared that Herman Melville’s Moby Dick is “sad stuff, dull and dreary and ridiculous.”
And a legendary German critic cited Thomas Mann’s Buddenbrooks as a “worthless story of worthless people in worthless chatter.”
And this one by one of the great British literary critics about George Orwell: “1984 is a failure.”
I cannot fail to mention the opinion of the works of two of America’s greatest literary icons. The editor of Bookman said this about Mark Twain: “A hundred years from now it is very likely that of Twain’s works: The Jumping Frog alone will be remembered.” And a London critic said of Walt Whitman: “Walt Whitman is as unacquainted with art as a hog is with mathematics.”
Reviewers and readers have generally been positive about my books. But, I like every other author, have had my share of scathing criticism. None, however, have ever dismissed me quite as brutally as some of these cited here.
Nevertheless, if someone ever does, I’ll remember that the experts aren’t always right.