Every book has a story – of its origins, of the secrets and the inspiration which led to its existence, the surprises that leaped out at the writer during the process of creation, the dead end alleys, the astonishing moments of transcendence, the feelings that linger when the writer types “The End.”  These essays about my books originally appeared at the Book View Café Blog.

AbductiCon: When time-traveling androids take a hotel full of SF fans for a trip around the moon
When people ask writers “Where do you get your ideas?”, they might get a growl, or an answer for some value of “EVERYWHERE!”, or some snarky comment about backyard idea trees. Or sometimes they get a bewildered look and disavowal of having any inkling whatsoever as to the provenance of a story that swam into the writer’s mind and demanded to be told.

I am not entirely sure where ‘AbductiCon’ came from.
It’s like nothing I have ever done before. It is science fiction, not fantasy, although as  I frequently point out most SF is fantasy: (Beam me up? Really?).
It is contemporary, its characters are people you will probably recognize. It is funny. It is metaphysical. It touches on the lore of my tribe and our favorite pastime, the SF Convention. At its heart, it’s a love letter to the con culture and the tropes of the world of SF&F. I actually deliberately named a character something in order to have ONE PARTICULAR LINE appear in the book (and you’ll know it when you see it. Trust me.)
It is one of the most polarizing books I have ever written. People don’t have meh feelings for this thing. They love it and laugh and hug it to themselves in recognition, or they berate me for having wasted my time on it and call it frivolous, shallow, silly, not worth the time spent ticking off the tropes that appear in its pages on the AbductiCon bingo card.
In what is known in the industry as an elevator pitch, a summary of the book in one or two pithy sentences, this one comes in as possibly — “It’s like the cult movies ‘Paul’ and ‘Galaxy Quest’ had a love child”.
The basic plot: What we have is a classic comedy of errors which happens with any convention, anywhere. It is thrown into a higher gear when a bunch of time traveling androids kidnap the entire con – HOTEL AND ALL – and take it for a swing around the moon while they finish figuring out their own origins
It is a book for people who love science fiction. It is a book for people like me, for people I love, for all the friends and colleagues I have met over the years – it is a thank you to that world for being all that it has been for me in its time, for giving me strength, and courage, and fellowship, and laughter – yes, even while I was writing this, the book was giving me warmth and support and permission to laugh while I sometimes escaped into it, writing it as I did during a wretched period of my father’s last illness.
This book is both for new or casual con goers, and for those who actually know what FIAWOL means.
Get your copy Here
~~~~~

Featured art: Fritz Scholder, “Indians with Umbrellas.”
With thousands of veterans on the way to Standing Rock to help defend Dakota Pipeline protesters against militarized police, Obama under increasing pressure to take a stand, and the timid corporate media beginning to admit there may be a story to cover, things are likely to get even more complicated and ugly.
This might be a good time to look at…

10 Books by Indigenous Authors You Should Read 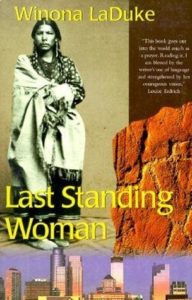 Winona LaDuke, Last Standing Woman
This novel spans decades and generations of people living on the White Earth Reservation in Minnesota, telling stories of struggle, strength and resistance that culminate in an uprising for independence.
See all the books at Lithub HERE