…with your life before you’re ready to be a writer

Another year is almost over, and it’s time to begin reflecting – amongst other things – on the act of writing, and those who perform it.
Here’s something true: before you can write about life, at least adequately, you have to have lived it. In some way, shape or form. And I don’t mean vicariously on Facebook, or even online at all.
Here are five things to do with your life before you’re ready to be a writer. There are  more than five things, of course. But these are pretty broad.  Feel free to add in your own subcategories, or nuances.

Know what an adrenaline surge REALLY feels like. You cannot possibly write about one without that visceral knowledge. And “dangerous” is huge – you can fit in a lot of things under that umbrella – do something that your mother might have warned you about, or something that society considers “unsafe”, or something simply exhilarating.
Here are a few of mine.
*Three of my (young, female) friends and I once climbed down from Table Mountain in Cape Town, on foot, in the dark, sliding down scree slopes and falling into the switchback roads, until we finally ended up hitch-hiking a ride the rest of the way down in a solitary car coming down from the topside parking lot, with a single male occupant inside. He was nice. We were taken down the mountainside and deposited at its foot without any incident at all. I was in my twenties; this was half my life ago. The adrenaline rush remains to this day.
*I jumped off a mountain. In a parachute. With an instructor, to be sure, in tandem, but still – I parasailed off a mountainside. I have pictures to prove it. When my father saw them – unexpectedly, before I did, long story – his response was, “If you survived that, when you get home, I’m going to kill you.” Yeah. Adrenaline.
*I swam off the edge of a coral reef. The adrenaline of THAT makes my teeth ache right now while I am thinking about it. The experience can still make my heart race.
*I gave my heart completely. And had it broken. And it HURT. And I’m the better off for having dared to do it.

You will gain only a very limited understanding of humanity if you seek it only with people who live in the small town where you were born, and you’re too afraid to venture beyond the edges into the great wide world beyond. Learn at least the basics of another language in which you can communicate with people who are NOT LIKE YOU. The world will open up like an unexpected dream. It’s nice if your destination is far flung and exotic, but it doesn’t have to be. Take a road trip. A train ride. If you have to start small, begin by going an hour, two, four, six, outside your comfort zone. Then ,if you feel ready, tackle the world.
Some of the places I’ve been:
* Fiji and Tahiti (learned a few phrases of the Micronesian/Polynesian vernacular, learned to snorkel, swam with dolphins, saw an octopus and a coconut crab in the wild, made friends with local people and learned their dreams. And I will never forget the colors of the coral lagoons, nor the black depths of ocean that lie beyond them. The colors of the world.)
* Vienna (walked the polished wooden floors of Imperial palaces and the cobbles of its streets, listened to waltzes, drank young wine in the wine shops of Grinzig, tasted Sacher Torte in the Sacher Hotel where it was born.)
* Kruger National Park, South Africa, and Etosha National Park, Namibia (saw lions and leopards in the wild, saw an elephant pace slowly and majestically away into the purple African twilight, breathed in the dust and the heat while watching herds of impala and zebra and wildebeest. Learned that rhinos are the firemen of the African savannah, and run TO a fire instead of away from it, and stomp it out with those hard-soled stumpy little feet of theirs if they can – which means that they can be damned dangerous to campsites when they blunder into the midst of fragile human campers.
* Japan (the first and only place on this earth where I was ever totally functionally illiterate – but I managed. Learned about the Shinto and the Buddhist faiths, and what each means to the Japanese people. Saw many beautiful temples. Saw many beautiful gardens. Been aware that I walked the ground where an ancient and vivid civilization had thrived for CENTURIES, and felt breathless with that knowledge, particularly when gazing, in a museum, at a samurai sword from something like 1452 – still bright and shining steel and still probably capable of cutting a hair in half as it floated down upon its edge.)
You get the idea. The world is a wide and wonderful place, and it is FULL of gifts.

You cannot know what it’s like to lose a living thing that you love until you do that – until you lose the cat you’ve had by your side for the last fifteen or twenty years of your life from a simple and inevitable advent of old age, or watch a beloved pet waste away before its time from something you cannot do anything about and make the decision on their behalf that they have suffered enough, or sit by the bedside of a grandparent who is slipping away and holding the soft wrinkled hands in your own knowing that they may not feel your doing so but that somehow, somehow, they know that you are there.
Real grief is raw and bitter, and tastes of tears. Before you write of it, you have to have had it tear your own heart apart. Because everything else will feel inadequate to those readers of your future work who HAVE known such grief, and will know if you speak the truth.

Something should make you feel your way down to your core, until you find that cold hard ember that is at the heart of you, not the swift mundane attacks of being cross about someone cutting you off in traffic or being rude to you on a subway. Something should reach all the way down to that primeval thing, the cold fury, the anger that does not leave you blinded with temporary passion but leaves you clear headed and clear eyed and knowing that ALL OF YOU hates this thing that you are seeing, hates with every fiber. True fury needs few words,  but if you want to write about it, you have to know what it FEELS LIKE. What it feels like to be REALLY that angry.
So look for something. Cruelty to animals. Cruelty to children. Pointless war. Something precious being willfully wasted. Ignorance and bigotry. Hypocrisy. Something, anything, something that you consider to be IMPORTANT ENOUGH to tap that cold fury in support of. Know it, understand it. Only then can you own it.

Because you will. it is inevitable. Do what you need to do anyway, knowing that it may meet this fate. Because fear of failure is otherwise going to put the brakes on too many things that you need to do or want or know in your life before you can understand any other human being alive deeply enough to write their story. You HAVE to know what it means to fail.
The lives of the very rich and the very happy seldom make for good story fodder – because these people can be seen as insulated from failure. Everything is handed to them, and if failure becomes a looming option then a scapegoat is found to take the weight of it leaving the one who truly failed unscathed by it all. The most interesting stories come from people who have failed HARD, and then learned from that failure, and risen up like proverbial phoenixes to touch fire again. Don’t be afraid to fail. Just be afraid of not trying.
Any questions…?
~~~~~

If you liked that book, you would surely like my…

Christmas and the end of the year are approaching and you are beginning to think about finding gifts for mom and dad and the kids, as well as Aunt Sarah, your best friend and maybe a work mate or two.
Personally, I think there is only one indispensable gift for any occasion — a book, naturally. 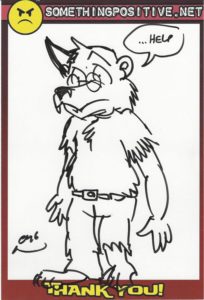 While there are hundreds of wonderful reads out there waiting to be discovered, I have a few suggestions involving… surprise… my own books. If you don’t know them, let me help you decide which ones might be of interest to you and your gift recipients.
If you  loved Harry Potter... try my Worldweavers series (Gift of the Unmage, Spellspam, Cybermage, Dawn of Magic). It’s the story of a girl who couldn’t do magic, then grew up to be the greatest mage her world had ever known.
If you loved Jo Walton‘s “My Other Children”, . try “Midnight at Spanish Gardens”
If you love Guy Gavriel Kay… try “Secrets of Jin Shei”, “Embers of Heaven”, or my newest, “Empress”.
If you love Cassandra Clare or Suzanne Collins, try The Were Chronicles (Random, WOlf, Shifter)
if you Loved John Scalzi‘s “Red Shirts”, try “AbductiCon” in which time-traveling androids kidnap a hotel full of Science fiction fans and take them for a loop around the moon.
You can get further information and links to sales points for all my books by going to “My Books” in the top menu under the header.
~~~~~