A series of videos featuring some of the most bad-ass women in history is on the horizon, Lily Myers writes at Bust.

The episodes will feature a Chinese pirate, Japanese novelist, journalist Ida B. Wells, computer programmer Ada Lovelace, and the radical anarchist Emma Goldman,
The spark plug for the crowd-sourced project is Anita Sarkeesian, whose first web series about the sexist roles given women in video games sparked outrage from many male gamers who responded with death and rape threats
“Rather than heroes, leaders and innovators, women are often depicted and treated as secondary characters in history, objects of affections, damsels to be rescued, or merely the wives, mothers and assistants to the men who achieved important things,” Sarkeesian says,
“The goal of Ordinary Women is to replace these old ideas about women’s limitations with real stories about amazing things ordinary women have achieved.”
Read the whole story at Bust.com HERE
~~~~~

A bit of history

For the last few days I have been talking about my first Comic-con in Seattle, but before I look at the germ of this extraordinary idea, how it all came about, I want to share one of my favorite moments at ECCC. 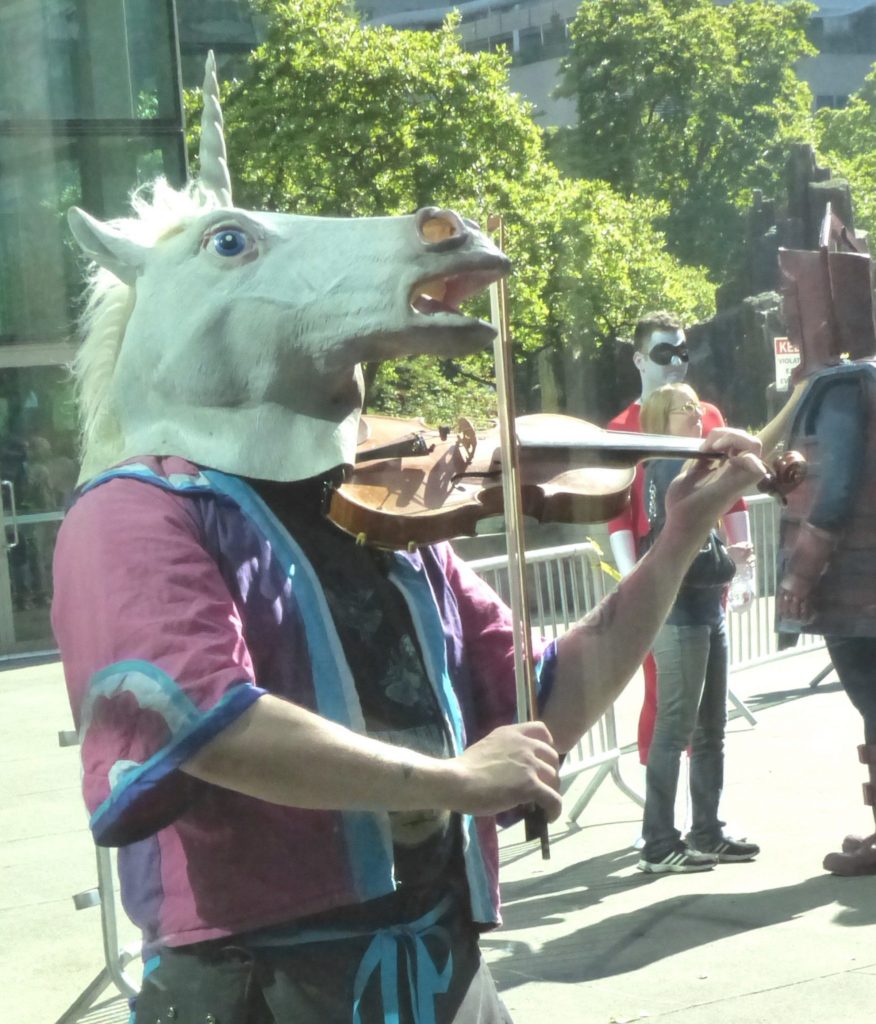 A unicorn playing a fiddle, Photo by Alma Alexander
The now iconic Comic-con began in March 1970 in San Diego.
Its earliest incarnation was a single-day “mini-con” which had two special guests and about 100 attendees, an event put together to gauge and generate interest in a larger event and find funds for it. It led directly to the creation of the first three-day event then known as the Sand Diego’s Golden State Comic-Con, held in August of the same year. Its guests were Ray Bradbudy, Jack Kirby and A E van Vogt – can I go drool now…?)
That con wasn’t much bigger than the mini-me that started the whole thing, with some 300 attendees as warm bodies on site, but that was… the beginning. That con had all the basics. The dealer’s room. The programming and the panels. Film screenings. It was the bedrock on which every subsequent con was built.
They dropped the “Golden State” and became simply the San Diego Comic-Con (or SDCC) in 1973, and by 1995 it had morphed into Comic-Con International: San Diego (CCI). Today, attendance tops 130,000, and the event isn’t – can no longer be – held in a single location but rather an entire campus of satellite venues necessary to house its vast programming requirements and the public intent on enjoying them.
The interests of this behemoth have expanded from the world of the comic book in all its incarnations into giant media cons complete with serried ranks of glittering stars from the spheres of publishing, books, TV, movies, and everything to do with all of those things.
These days, you can trek from packed panels revealing the next development in a popular TV franchise to a loving retrospective of a yesteryear series, from brand new trailers to movies yet unseen to showings of vintage films to which the fans know the entire script by heart, hopping skipping and jumping from books to movies to TV to Internet and social media and blogs and podcasts and anything and EVERYTHING in between. And while you’re doing all THAT, there’s a “show floor” which is like every dealer’s room from every convention you’ve ever been to in your entire life put together, and then multiplied by ten.
And holding all of this together is the glue of the eager fans, with very high quality cosplay now an accepted part of the experience, where you walk the corridors rubbing shoulders with various incarnations of every popular character of page and screen and people vying to outdo one another in how magnificently these characters could be depicted.
From SDCC, the Comic-Con beast has spawned many descendants, across the world. There are Comic-Cons in Australia (since 2012), Russia, (since 2014), various locations in Europe (Romania, at least five locations in the UK), across the Middle East and Asia (Dubai, India), and the Americas, both South (Brazil, since 2014) and North – several separate ones in Canada… and, by now, dozens in the USA, the length and breadth of the country of greater or lesser longevity and provenance.
Emerald City Comicon, in Seattle, has been an annual fixture since 2003. Originally housed at the Century Link (QWEST) Field (first the West Field Plaza and the Event Center), it moved to its current home at the massive Washington State Convention and Trade Center in 2008 – and in 2013 it grew big enough to swallow the entire center for three days. It overflowed into the adjacent Sheraton Hotel in 2014.
The original ECCC boasted some 2,500 attendees. That grew at a dizzying rate. By 2007, the number stood at 7,000 (that was the first year they featured “media” guest celebrities) Two years later the number of attendees had almost doubled to 13,000 people and included media guests like Jewel Staite and Wil Wheaton.
In 2010 they had Leonard Nimoy and Stan Lee, and 20,000 eager fans. 2011 brought in even more stars (William Shatner, Bruce Boxleitner, Brent Spiner, Jonathan Frakes) and 12,000 more con-goers. 2013 brought in the likes of Patrick Stewart and Billy Dee Williams, and a horde of 64,000+ attendees. A stellar 2014 featured John DeLancie, Michael Dorn, Nichelle Nicholls, Ron Perlman and Dwight Shultz (among others) and an attendance number of 70,000+. They spoke of 80,000 people in 2015, and more stars of stage and screen.
They also mentioned a magic number of 80,000+ this year, in 2016, the year I first walked those streets full of people dressed as Spiderman and Rey from the new Star Wars and Alice in Wonderland and Thor of the Hammer and Doctor Horrible and every possible incarnation of Doctor Who.
~~~~~
About me    My books    Email me    Get My Newsletter
If you found this blog post interesting, amusing or helpful, then please use the icons below to share it with other writers, readers or the guy next to you on the subway.