The last days of a Comic-con

I had been hearing distinctive Artoo Detoo chirps and raspberries for a while but I couldn’t quite nail down where they came from – until the next morning, when I noticed a bevy of life-sized R2 units in the concourse.
I raced down to play with them of course.
There’s a picture. I’m leaning over one in a full Leia pose, one hand on its noggin. 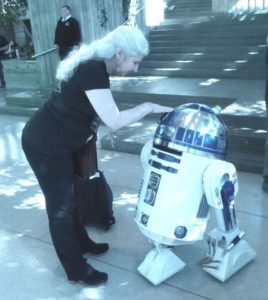 “Did you say ‘Help me Obi Wan Kenobi, you’re my only hope?” someone asked on Facebook, later, upon seeing the photo.
“Well, not out LOUD,” I responded primly.
My signing at the University Books booth was at 2 PM and so I presented myself there at that time, together with John Pitts and Robin Hobb, who of course immediately drew a line of people who were telling her how much they loved her books.
A young lady came up to the table where I was sitting, without a book in hand, but with a very earnest expression.
“I just wanted to tell you, I love your books, and I think they’re wonderful,” she said, and I got this lovely warm feeling all over. “I think I have them all…”
“There’s a brand new one,” I said, lifting ‘Empress’.
“I tend to read on Kindle,” she said.
“It’s on Kindle,” I assured her.
She lit up. “Thanks!” she said. “I’ll look for it!”
Other people wandered up with copies of ‘AbductiCon’ or The Were Chronicles books. It wasn’t Nathan Fillion, it wasn’t Robin Hobb, but it was a pleasure. 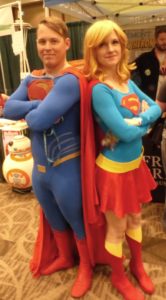 I made my way through the fairies and the warriors and the hobbits and the wizards and the princesses and the monsters and the superheroes and the gods (and one Sheldon Cooper) and walked those long five blocks back to the hotel where I keeled over. With another book. Which, yes, I finished before bedtime…
The crowds had worn me down and there was no “have-to-see” panel or event on Sunday. It was time to go home.
On the way out, a family of four – Mom, Dad, and two kids, one teenage, one slightly younger – all smiled at me as I stepped into the elevator. They were all wearing lanyards with Comic-Con badges on them. I wasn’t wearing my own badge any more but my T-shirt had a Tribblecentric version of the “Soft Kitty” song that Sheldon Cooper so loves on Big Bang Theory, a crossover of two fandoms, and the Mom of this little family nodded at it.
“I’m guessing you’re in sympathy with all this, going by the shirt,” she said, clearly meaning the Comic-Con gestalt we all shared.
I caught the eye of the teenager, and she grinned broadly. I smiled back. The Next Generation.

I’m a convention veteran with two World Fantasy Cons under my belt, six Worldcons, and countless other smaller cons across the breadth of the continent. I have badges stuck on a cork board from cons in New York, Wisconsin, Oregon, and Canada, from Vancouver to Toronto and Montreal.
But they’re all tiddlywinks compared to something like this. It was literally the first time I had gone conventioneering with the population of a small TOWN. It was… an interesting experience. 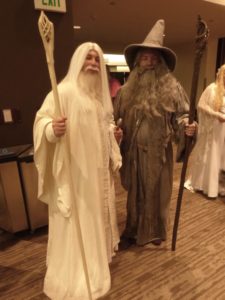 There’s a buzz, something in the air. There’s a knowledge that you can say something weird and crazy and utterly esoteric and be certain that someone will *get it*. It’s a feeling of belonging. It’s a sense of being able to smile at a complete stranger wearing wings or horns or a cut-out shell of BB8 covering her large pregnancy bump or the robes of a Middle Earth Wizard or the uniform of a Star Trek officer or a Spiderman mask, and know that even if you’re wearing none of those things they’ll grin back and know that you’re “in sympathy with all this”. There’s an immensity of inclusion.
But for a cast-iron introvert like me there’s also a weight to it which can become crushing – there is a reason I tend to avoid large crowds. I can spend a limited time in them, amongst them, and then I get the urge to find a quiet corner somewhere to catch my breath and re-collect my scattered energies. I NEEDED to leave that space when I left it because there were PEOPLE EVERYWHERE. The constant stream of people up and down the packed escalators looked like a gush of water from a busted hydrant, unstoppable, powerful, sweeping all away before it. There were moments I was part of it. There were moments that it was imperative that I *get out of its way*. It was an exhilarating but also very draining three days.
Am I glad I did it? Oh yeah. I asked Maleficent to excuse me when I stepped on the trailing edge of her cloak on an escalator. I hugged an Artoo unit. I watched a Unicorn playing a fiddle out in the sunshine of a convention center courtyard. I caught a glimpse of a Captain Mal smile. I met some of my own fans at the book signing.
I’m glad I did this.
Tomorrow: How Comic-con came to be. A history
~~~~~
About me    My books    Email me    Get My Newsletter
If you found this blog post interesting, amusing or helpful, then please use the icons below to share it with other writers, readers or the guy next to you on the subway.