Words in the Woods

The Rainforest Writers Retreat 2016 is over

My hubby went along this year to see this wondrous place to which I vanish sometimes in the Olympic Peninsula rainforest. The cabin we were in was snug and cozy, with a temperamental gas fireplace heater which switched itself on and off with a loud put-upon WHOOMPF.
The cabin was directly across from the Salmon House Restaurant where we had one scrumptious  meal which included their trademark tempura-battered mushrooms. 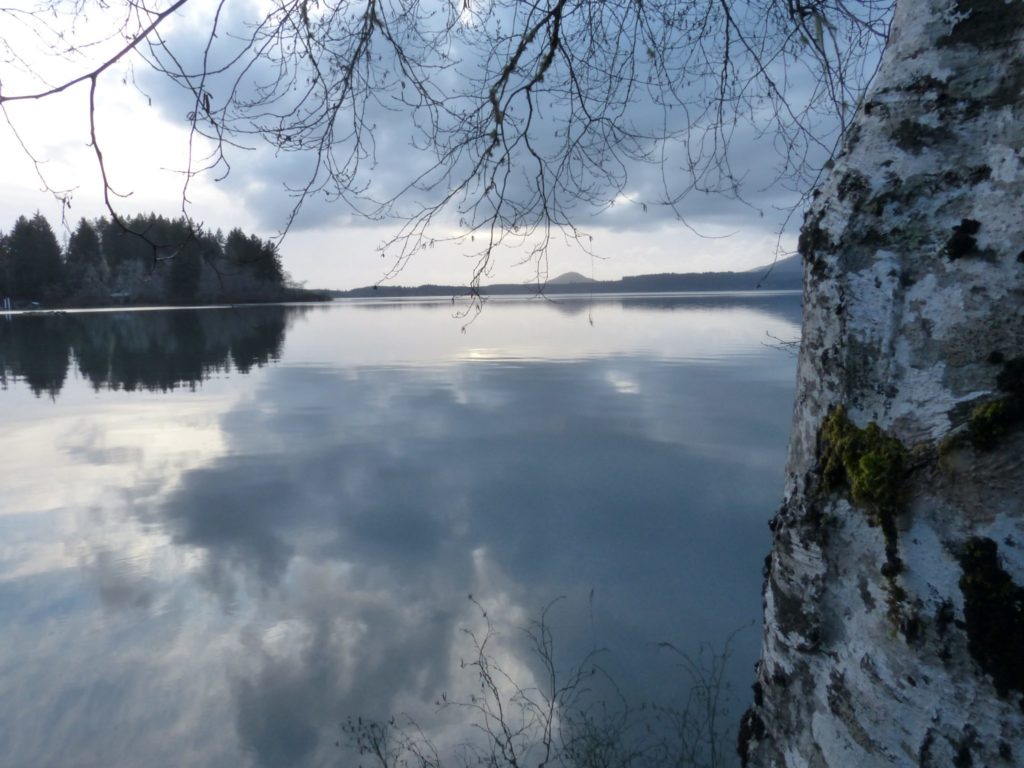 The lake was disconcertingly high with the shoreline trees knee deep in water. The lake grew like a semi-sentient monster, and every time we looked out it was visibly higher, hungrier, reaching. The crescent of shingle beach on the far side which I walked the year before, from which I took some great photos of the Golden Hour on the lake, was quite vanished, under water whose depth I really didn’t want to consider testing even in my knee-high gumboots.
And the reason it was so high and getting higher? Well, it rained. A lot. It rained SOLIDLY from sun-up to sundown most of the time we were there. 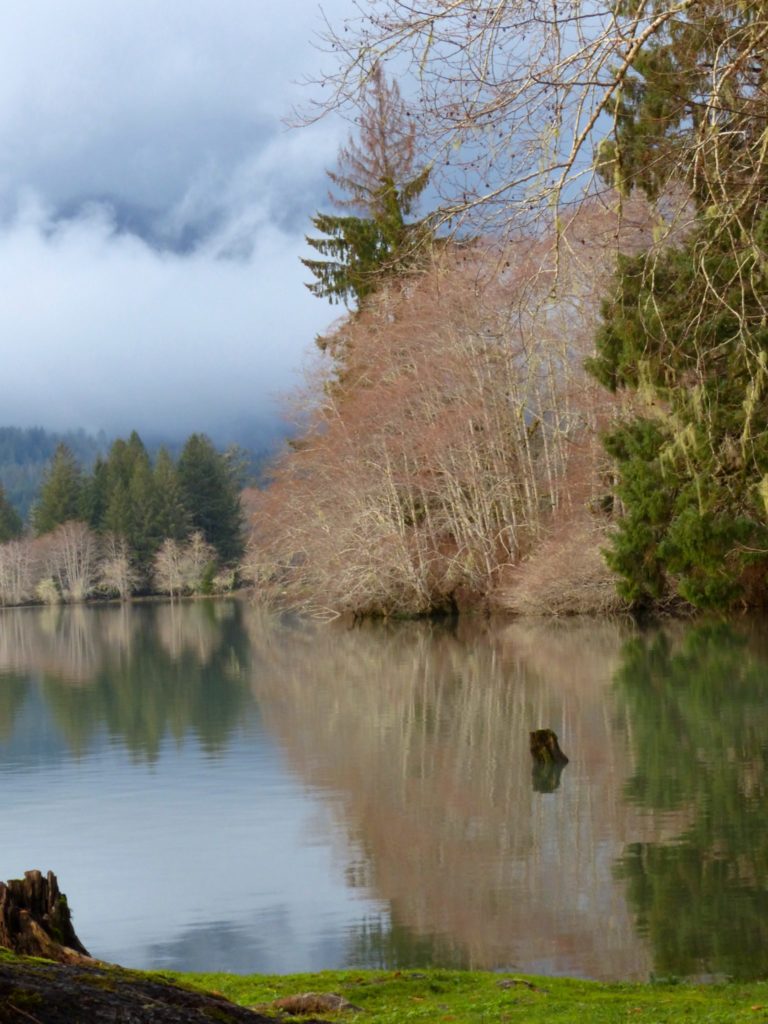 Despite that, we did get to visit the world record spruce tree together, and it was as amazing as it always is. I love big old trees and this one I have developed a special affection for. I have to go visit it at least twice during a weekend like this, and lay a hand on its ancient skin, and wish it well.
I gave a talk on World-building to pretty much a full house. Other highlights included the group dinner (at which I got to speak French), the soup-and-grilled-cheese-sandwich lunch provided by Deborah and Chuck (some amazing soups this year. The Moroccan Vegetarian offering was stupendous.), and the Saturday party which produced a bottle of absolutely amazing Sabra chocolate liqueur. In between there were the chats with people, the “what are you working on” connections made in the writing parlor. All that.
But the reason all of us were there were the words in the woods.
Some of us edited, some plotted or planned, and others just wrote furiously. 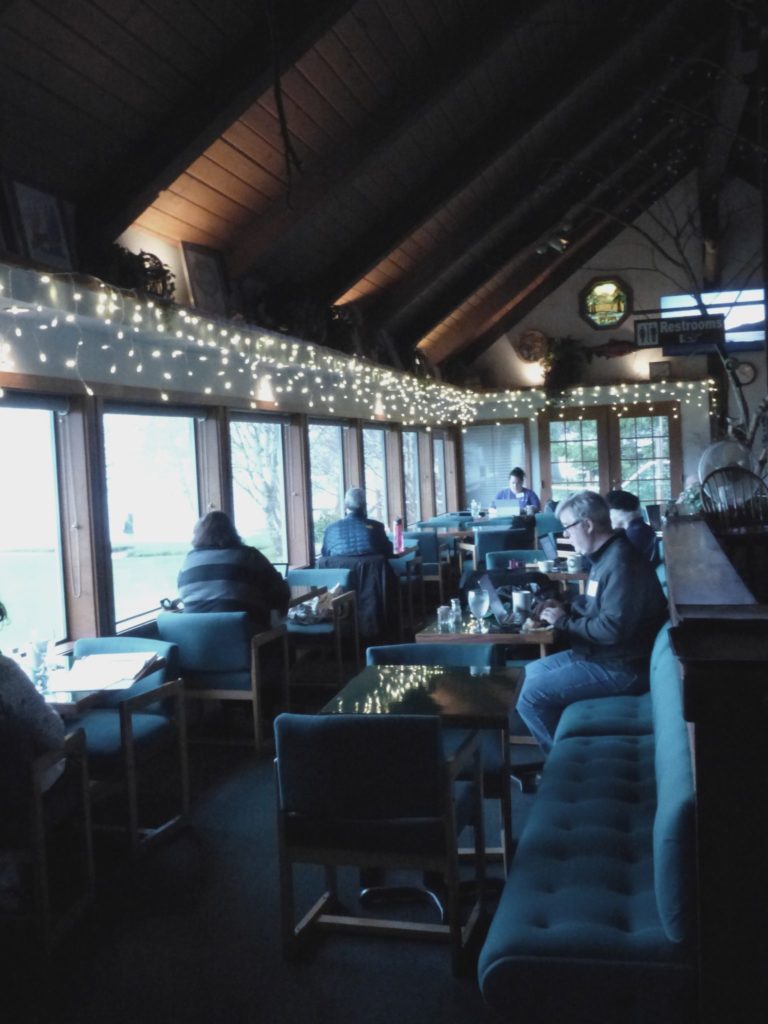 I had brought along a vexing timeline that needed nailing down before the next book could begin, and I did that on Thursday, breaking the back of a job over which I had been procrastinating for months at home. I even launched into the writing on that day, which meant the first words of a new novel were written right there next to the window in the lounge of the Salmon House, staring out at the changing sky and the wash of sunlight over damp moss and glittering water.
On Friday I did nothing except sit there and wrestle with words in the woods – and I wrote more on the book, wholly unrelated scenes which will need to be slotted in properly and a very rough draft of it all with entire screeds of what I knew very well were immense infodumps which would need expanding and smoothing down later.
But the words were now there, they had been nailed down, and at least I had the material in black and white with which I could WORK to make it a coherent tale. Between these long snatches of narrative I tweaked my timelines with crabby tiny writing on my large sheets of color-coded background sheets. Someone asked me later having observed me doing this how on earth I could READ anything I wrote in that tiny scribbled hand in the boxes of those tables. The answer of course was simply that sometimes I would have to do it by extrapolation, figuring out what I must have meant to write by reading the context around it.
The word count on the whiteboard grew. Before Friday was over several people had broken five figures and by the time the final word count was read out after a rain-wracked group photo on Sunday morning we had produced 300K words plus change. I myself came in fifth at 20,000 plus by the end of the weekend. It was a good weekend, and much was done, and my story is coming clear in my head.
Following the closing ceremonies on Sunday, we hit the road home, in a cloudburst which continued from Olympia to well past Tacoma while I sat bolt upright with both hands gripping the steering wheel. A dozen rainbows made their appearance to the sides of the road as we drove, glimpsed through the rain as it let up every now and then.
Now it is just a memory of words, the rising lake, and the woods. And the photographs which documented the passing of another Rainforest Writers Retreat.
From here… there’s a new book waiting.
~~~~~
Quote of the Day 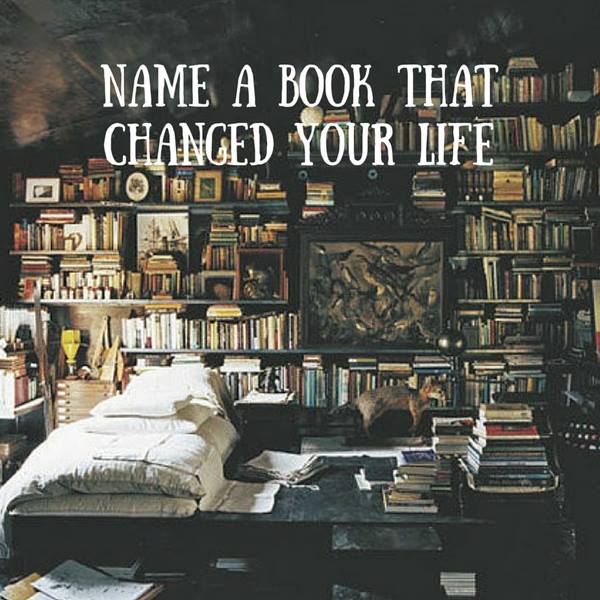 You go first.
~~~~~
Get Newsletter   My bio    My books    Email me
If you found this blog post interesting, amusing or helpful, then please use the icons below to share it with other writers, readers or the guy next to you on the subway.