Goodbye — and Thank You

I was nineteen years old and a ‘seasoned’ writer who had written between three and six novels, depending on whether you counted only the ‘good’ ones or everything, when I hit upon a brilliant idea.
I would rewrite the Matter of Britain, the body of medieval literature associated with legendary heroes like King Arthur.
In the first person.
As the Queen.
I wrote the book. entitled “I, Guinevere”, and got so identified with it that my boyfriend at the time used to send me cards addressed to “the Princess” (I still have those cards. They are little treasures.)
It was a serious attempt to come to grips with a topic I passionately loved, with characters whom I’d known well for years through dipping into their stories as told by many other people, with the kind of lush language with which I was to become familiar as my writing later grew more fully into that shape.
“I, Guinevere” was promptly handed by my father to a South African publisher who loved it. I was close enough to a published book to smell it.
He said that the novel had to go to a beta reader first for his report. And off it went.
The beta reader… was Andre Brink.

André Brink in 1982
He was one of South Africa’s great writers, a Name, and I was stunned. But Brink was perhaps the last person who might have had any sympathy for the kind of writer I was – or I was shaping to be – or for the subject matter that I had chosen.
I waited for his report with something like existential dread.
When it came back, it opened with a sentence which still takes my breath away.
“I have no doubt at all that this work was written by someone who will be a great writer one day.”
If you can smell the next word, you’re right. It was
“But...”
One of the reasons he gave for my novel’s having missed its mark was that it lacked, as he put it, “what Nikos Kazantzakis called madness“. (It was because of this that I went on to read Kazantzakis whom I had not read before then – so thank you, Mr Brink, for Zorba the Greek.) What he meant, I suspect, was that it lacked the rawest kind of passion, a sexual energy with which this story was charged – but with which I had failed to imbue it.
It rankled, then, but of course he was utterly correct – I was nineteen years old, and a very young and innocent nineteen, and my attempts to write adultery in THE FIRST PERSON (even adultery decorously clad in the robes of High Chivalry) were probably laughable.
I say “were probably” because, to my chagrin, I seem to have permanently lost every last copy of that manuscript. I would love to read it now all these decades later just to see by how much I had sailed past my mark but that is no longer possible. All I have is a memory of that nineteen-year-old girl and her romantic-but-attempted-to-be-gritty vision of Camelot and its shenanigans, and of the book that was born out of that. 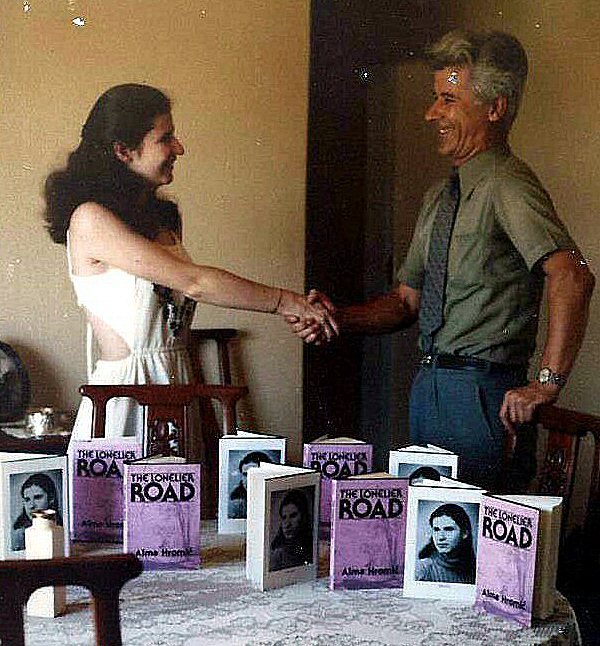 A portrait of the writer as a young woman — Alma at 19 and her late father, Hamo Hromic, with an early book of her poetry
And that sentence. The sentence that – in spite of himself – in spite of all his misgivings and his caveats and eventually his veto – Andre Brink could not help but give me.
Thank you for that, sir.
With gratitude, and respect, I bid you farewell. And may Nikos Kazantzakis greet you with a does of ‘madness’ out there in the light where the passion of words (which you have always carried with you) blazes like a star,
Alma Alexander
~~~
Andre Brink dies at 79
~~~~~
Quote of the day
“If I speak with a character’s voice it is because that character’s become so much part of me that … I think I have the right then to imagine myself into the skin, into the life, into the dreams, into the experience of the particular character that I’ve chosen.” ~ Andre Brink
~~~~~
Alma Alexander       My books       Email me
If you found this blog post interesting, amusing or helpful, then please use the icons below to share it with other writers, readers or the guy next to you on the subway.