The power of words …

— in theory and in practice
An animated video features an 81-second TED-Ed lesson called “Lessons from Auschwitz: The Power of Our Words.” Watch it (link below), but the gist of it is a vow that a young girl made after surviving Auschwitz: “I will never say anything that couldn’t stand as the last thing I ever say.”
This is a great and lofty sentiment, my husband even called it moving. But it is trumped by being human. If you try to live up to the letter of this vow, your life will eventually be silence. Because NOTHING you ever say is worthy of being the last thing you ever say.
Yes, there are things you might regret having uttered – but they were shaped by a moment in which they were said, and if you want to unsay them and take them back you are also sucking back that moment which you lived and which drew those words from you. It is a memory. It may be one filled with regrets but if so, regrets are only ever born of love, and no matter how much you end up regretting, you cannot in the end regret enough to wish that you had never loved.
Don’t worry so much about what you said. It is the unspoken truths in your own heart for which you will answer for, in the end, when you face a final judgment, if such there be. In between this moment and that judgment day, live, love, and be human. That is all anyone can ever, or has ever, asked of you.
The power of words
~~~~~
What is feminism?
Not sure whether or not you’re a feminist? Maddie Crum asks at The Huffington Post.
Well here’s a quick test: Do you believe men and women should have equal rights and opportunities? Yes? Great! Glad that’s resolved.
In case the meaning’s still murky, here are 13 fantastic female authors who can spell it out for you in simple, eloquent terms:

“We are volcanoes. When we women offer our experience as our truth, as human truth, all the maps change. There are new mountains.” – Ursula Le Guin at a commencement address at Bryn Mawr College

“I don’t think a female running a house is a problem, a broken family. It’s perceived as one because of the notion that a head is a man.” – Conversations with Toni Morrison
What is feminism?
~~~~~
Words Used To Describe Women

Words like ‘bitchy’ and ‘slutty’ are clearly sexist and meant to insult, Amanda Duberman says at The Huffington Post, but even seemingly neutral adjectives have become euphemisms for “uniquely female character flaw.”
These words are often disguised as flattery while used to subtly undermine the woman being described. It’s time to strip them down. Below is a brief compendium of adjectives that are often used to describe women — and what they really mean. e.g.
Bossy: Has on one or more occasion suggested that someone, man or woman, has made a factual error.
Pushy: Used to describe a remarkably accomplished woman whose high standards and willingness to insist on them aggressively just kinda rubs colleagues the wrong way.
Demeaning words for women
~~~~~
12 Writers on the women authors who inspired them
Isaac Fitzgerald writes for BuzzFeed about contemporary writers talking about their Literary Mothers. For example:
Ashley Farmer on Joan Didion 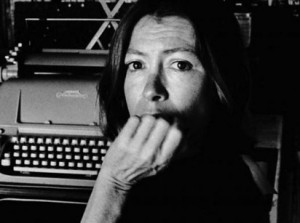 “I write entirely to find out what I’m thinking, what I’m looking at, what I see and what it means. What I want and what I fear.” —Joan Didion
“Didion’s idea seems radical in its simplicity: not to write what you know but write because you don’t. Not to bring an understanding to the page, but to arrive at it there.
Her work has appeared for me at crucial moments. I found Play it As It Lays in a used bookstore in Louisville, KY. I was in my mid-twenties. My shelves were filled with two kinds of books: romances written by long-dead women and contemporary fiction by serious men. I didn’t know yet that anything was missing, at least not consciously. But then I read the dark novel on a gray day in one sitting. It was a piece that shook me: a brutal story told in a brutal way, a modern woman whose life wasn’t coming together like those in so many of books I’d read, but unraveling.
Literary Mothers
~~~~~
If your novel were set to music…
A piece of software, TransProse, creates a musical score based on the emotions in a novel.
Novel emotions
~~~~~
Top Tech Tools of Famous Authors
What is the first scene that comes to your mind when you imagine a contemporary author working on their novels? A powerful laptop and a peaceful coffee shop, perhaps? Not necessarily.
Ninja Essays has created an infographic which explores the technologies used by great writers and claims that most writers don’t appreciate high-tech devices as much as we do.  Maybe we should all reach out to a piece of paper and a pen from time to time.
From Mark Twain to George R.R. Martin here is what some of the most famous writers use to produce their works.

~~~~~
Quote of the Day
“The first thing I do in the morning is brush my teeth and sharpen my tongue.” ~ Dorothy Parker
~~~~~
Alma Alexander
Check out my books
Email me
Comments welcome. What do you think?