First: Louis C.K. made some comments about smartphones. He talked about not giving them to kids, and he talked about the overall effect of smartphones on society. By having the Internet in our pockets, we’re never truly alone.
Second: I read “The Circle” by Dave Eggers and it scared the crap out of me.
The deadly social media
—–
Eerily captivating photos of former row houses that now stand alone
There’s something very fairy-tale-like in these. I don’t know. A slice out of another space/time? A hint of Rapunzel’s tower?
They’re weird and strange and it’s hard to look away. There are STORIES here. 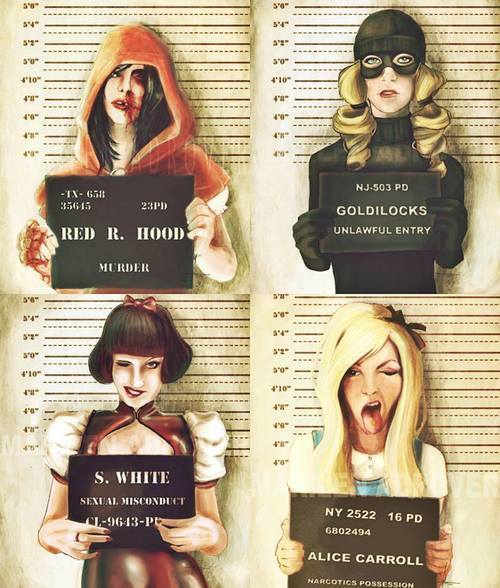 Marilen Adrover, the artist, wrote at her Deviantart website:
OMG. I’ve woke up this morning and I’ve seen about 380 Deviantart messages. Thought it was an error but as I was reading, I realized that my Tales Mugshots have become insanely popular. Frontpage on Reddit & I’m on Wil Wheaton’s tumblr!!! I’m still shaking!!
Mug shots
—–
Words That Are Their Own Opposites
Judith B Herman writes in Mentalfloss: Here’s an ambiguous sentence for you: “Because of the agency’s oversight, the corporation’s behavior was sanctioned.”
Does that mean, ‘Because the agency oversaw the company’s behavior, they imposed a penalty for some transgression’ or does it mean, ‘Because the agency was inattentive, they overlooked the misbehavior and gave it their approval by default’?
We’ve stumbled into the looking-glass world of “contronyms”—words that are their own antonyms.”
Contronyms
—–
Pixar’s 22 Rules of Storytelling
Chris Robley writes on The BookBaby Blog about Pixar’s 22 Rules of Good Storytelling.
The animation studio Pixar has produced so many successful films, not because those films are full of fancy visual pyrotechnics (though they often are), but because Pixar’s writers, directors, and animators privilege plot, empathy, and character development above all else.
Rule #4:
Once upon a time there was ___. Every day, ___. One day ___. Because of that, ___. Because of that, ___. Until finally ___.
Storytelling Rules
—–
— Alma Alexander
—–
Sign up for my newsletter, Tea with the Duchess, here
Email me:
—–