An Adult YA Addict Comes Clean
It should be noted, Jen Doll writes in New York Magazine, that she reads plenty of things written by and meant for adults.
But they don’t always captivate me the way YA does. Those are the books I read in a one-night rush, staying up until three in the morning to find out what happened, and when I do, sighing in pleasure because the heroine really does get the guy, the world has been saved, the parents finally understand, or there is at least the promise of things working out in the end. Adult books may be great literature, but they don’t make me feel the same way.
There’s a moment in Rainbow Rowell’s Eleanor & Park, a book about two misfits falling in love, that captures it best. Eleanor reflects on the mix tape Park gave her: “There was something about the music on that tape,” Rowell writes. “It felt different. Like, it set her lungs and her stomach on edge. There was something exciting about it, and something nervous. It made Eleanor feel like everything, like the world, wasn’t what she’d thought it was. And that was a good thing. That was the greatest thing.”
The YA addict
—–
Top 10 books about Paris
From Baudelaire to Balzac to Proust, these 10 titles selected by the Guardian provide an insider’s guide to a city of intrigue, romance and squalor.
I’ve read most of these, but while I started Émile Zola’s Nana, I couldn’t really get into it and it is one of the very few books I ever started and didn’t finish.
Paris in books
—–
There’s a secret library in the New York City subway
The underground branch lives outside the turnstiles at the 51st Street 6 stop, and it sounds like a sort of literacy-and-public-transit-themed Cheers.
“You see the same people all the time,” patron Melissa Britt once told the New York Times.  “You can’t find this place unless someone tells you about it,” aother patron added.
Secret subway library
—–
Ingenious Bookshelves
This is beautiful but it seems like a terrible way to treat a piano. 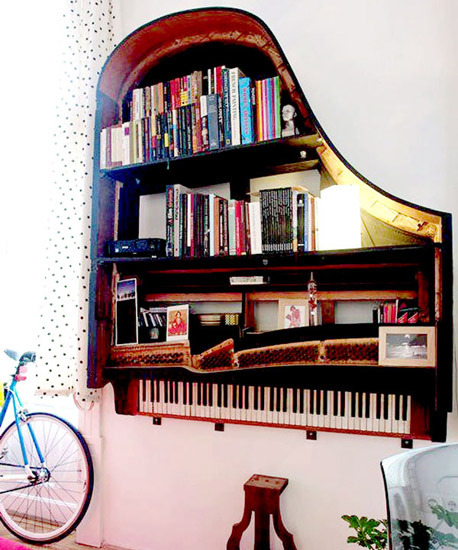 Ingenious Bookshelves
—–
Forget the Disney princess
Photographer Jaime Moore looked for creative inspiration to take photos of her 5-year-old daughter but found most of the ideas were on how to dress your little girl like a Disney princess, Rossalyn Warren writes in Upworthy. It got her thinking about some real women for her daughter to look up to, whether that be a pilot, a doctor, or even an astronaut.


Role models
—–
Misused Words that can drive you nuts
Such as, it’s not pronounced ‘me-me’:
It’s meme, like scream. As in, say ‘me-me’ one more time and watch your coworkers scream.
Misused words
—–
— Alma Alexander
—–
Sign up for my newsletter, Tea with the Duchess, here
Email me:
—–