Mushrooms (or, I may be a hobbit…)

More than a decade ago, Deck and I made a trip down to California. We flew down to San Francisco, did a few bits of official business there, and met up with some friends whom we had known since,um, the last millennium. They lived in this AMAZING place with a view out to the Bay Bridge and with visiting parrots who flocked to the trees below their balcony every day. We spent an enchanted visit with them and then we made a start on our driving trip up the coast which would eventually deliver us into Portland, Oregon, in time for Orycon that year.
That was the trip that introduced me to the redwoods, and I wept at them, because there was nothing else to do in the face of their beauty and majesty, their EXISTENCE. I am eternally grateful that I was given the privilege of seeing them, of touching them, of talking to them (yes I talk to trees – so?..) 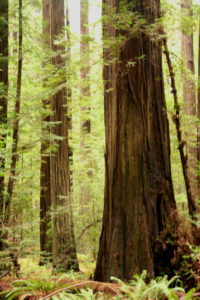 That was also the trip which we broke off for a night in Fort Bragg, staying in this lovely little B&B place, and our SF friend of the parrot balcony suggested that we make a point of eating in a restaurant (it has closed, since…) called Mendo Bistro. And more specifically, WHEN we ate at the Mendo Bistro, we should order this mushroom creme brulee.
Yes, MUSHROOM creme brulee.
I was dubious, and so was Deck – we had neither of us heard about mushrooms as being ingredients in a creme brulee dessert. But our friend was wise and she would not have steered us wrong – so we ordered a wary SINGLE portion of said creme brulee at the conclusion of our meal, to share.
It took one bite of the thing, and we began eyeing each other with a view to plotting how to take the whole dish and run with it.
It was Nirvana. It was also the first time I had ever heard of Candy Cap mushrooms.
Fast forward to just the other day, when a Facebook conversation turned to that trip and the SF friend reminisced about the B&B place – and then I remembered the mushroom dessert, and we sighed over the memory of it (the place that made it is, as I said, defunct now..) I had forgotten thename of the heavenly mushrooms but she reminded me, and I went away… and googled it.
YOU COULD BUY THEM. DRIED. 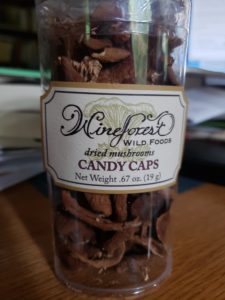 Before I could second guess myself, I did exactly that. Like the proverbial hobbits, I went mushroom raiding except that I didn’t go sneaking them, I modernised hobbitry by bringing the whole thing into the cyberworld They are not cheap, and the package that turned up was not large – and i wasn’t going to make creme brulee anyway, I don’t have the equipment for it. But I found a recipe for Candy Cap Shortbread, and I made those cookies the day after the musrhooms arrived. 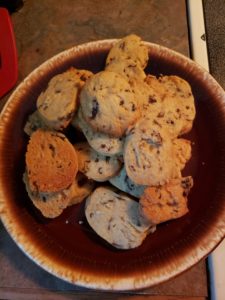 Gentle reader, the whole house smells of rich maple (which is what these mushrooms smell like) and of memory. I laughed and I cried and I remembered things and I bit into magic musrhoom cookies , sobbing with happiness. no I mean that literally. Think about it for a moment and you will understand it.
Scents bring back memories. This one, for a handful of precious minutes and a treasured hour or two, brought back the joy of a shared lifetime… of a once in a lifetime trip to a magnificent place…of love… of sharing… of friendship… of a time when the sun hung golden in the sky and the world was made of quiet happiness.
I may have acquired a guilty addiction. I may HAVE to buy these mushrooms again. THere can be no price on happy memories – but what price a trigger for them, something that can bring them back and recall them on demand? these cookies may have just become a very important part of my life…