The seventh day I rested: A history of a world’s creation

Twenty years ago I wrote down a list of short character sketches – nine little girls, nameless, contextless, just nine characters in search of a plot. My husband asked me what I had there, and I said, “my next book.”
“Great,” he said, “what is it about?”
“I have no idea,” I said gleefully.
And I didn’t, not until days later a friend sent me an article about the women’s language of China, Nushu, and the last living practitioner of that language, an old woman who had learned it at her mother’s knee as was traditional, was dying. And I read the article, and my on-paper characters put on flesh and bones and cultural characters, they woke up, they woke up “Chinese”, and they said, “start taking dictation”. 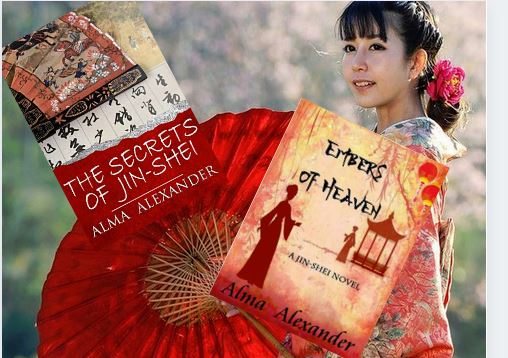 I wrote the book that became “The Secrets of Jin-shei” at white heat, sometimes writing 10,000 words a day, having to be “woken up” from that fugue state by my long-suffering husband in order to eat or get a genuine night’s sleep. 200,000+ words took me less than three months to write, and the result was not your ordinary average first draft, full of holes and kludges. Those two hundred thousand words were good words, were all keepers.
The book got me an agent, the agent got me a double handful of international deals and high-end award nominations and very decent money. The agent began asking if there was a sequel and I kept on saying no – right until the moment that there literally was, and that became “Embers of Heaven”, a stand-alone but a follow-up that took place in the same world and the same setting as the earlier book.
If the first Jin-shei novel was inspired by Imperial China, the second drew its inspiration from events of centuries later, from the Chinese Cultural Revolution, and in my research for that book (and I did TONS of it, as I did for the first.) I quickly realized just why it was so hard to write historical fantasy about this kind of thing – because it was almost impossible to invent something more horrible than the things that real human beings had already done in the real world to other human beings.
But it wasn’t historical China
The world of my novels was inspired by China, yes. But I took pains – in forewords, in author’s notes, in interviews, in blog essays, in anything that I could find a place to do so – to underline a single salient fact. THIS WAS NOT CHINA. Not the real China. It was never intended to be.
It was historical fantasy based on a real thing, hung on a real hook, but the warp and weft of the cloth that I wove was pure fantasy spun in my own mind. People still huffed angrily in reviews that it was “historically inaccurate” (it was historical FANTASY, it was not meant to be historically “accurate”, not when it was merely based on a historical period). It was as though some readers/reviewers simply could not or would not understand the concept. I was sometimes taken to task, often quite irately, for not accomplishing things I had never set out to do in the first place.

Fantasy. Fantasy. It was FANTASY

I put on some gold leaf to gild it, gold leaf that was real and could be touched and recognized, but what lay beneath it was rich and strange and wholly my own creation, a land I called Syai . My books were not set in the place that existed in our own reality, a place known as China, with its own accurate set of historical baggage – I did not choose any particular dynasty to evoke, although that was a question often leveled afterwards. The name Syai was my own private joke, really, because that is an alliteration of the word that means “shine” in my own mother tongue, and it pleased me to write about a land that was literally “light”, down to its name.
And so I keep on telling it and telling it and telling it – that little piece of truth – that I stood with one foot in real history (which I took great pains to research in depth and detail) and one foot in that glittering fantasy world (which I built using ‘real’ things I had found out in my research but rearranged so that the resulting story-country was not remotely the same place as the one from which my original inspirational facts had come.
Historical fantasy is an interesting animal. I love it, because it gives me the richness of a perhaps recognizable historical narrative and the freedom to spread my wings and fly free within its context and its confines.
For instance, the entire idea of jin-ashu (the secret women’s language in my books) and jin-shei (the sworn sisterhood between sisters-of-the-heart who chose each other and communicated in this secret tongue) was already right there, it existed in some shape in our own real world, hidden between veils of mystery, just unknown enough to inspire – but I made it strong enough to carry two novels, something rich and strange and treasured, and I wrote a story about the secret lives of women and how those lives could shape the world in which they were lived. I took the language that only a few might know; I added female friendship, magic, strength, loyalty, curiosity, betrayal, poetry, treasures, fabulous cities, worlds broken and rebuilt, great love, loathing, history, fantasy, all of it, all of it, wrapped the kernels of truth in the silver tissue of fiction and fantasy and created a place where it could all exist.  It was one of my most enduring and best loved novels.
Just yesterday I came across a brand-new article about Nushu – about its revival.
It feels as though I’ve come full circle. Now, it isn’t new and inspirational – it’s something recognized, and loved, and treasured, something that was a formative part of my own life and career. In the wake of that book, I have my own “jin-shei sisters”, and I know that others have taken up the term and the concept as well. It has all taken a life of its own. But now, seeing that article, it’s like I see a flower blooming, and I remember it from long ago – and it is a flower whose seeds I once took, and planted, and nurtured blossoms of my own, not precisely the same as the original which I had seen and loved but similar, with a subtly different hue or scent. And now I come this way again, and there it is, by my path, by the roadside, the flower that I loved once when I was young.
I stop, and look, and smile. It makes me happy to see it bloom again.
The circle is closed. The world within a world is real. A promise feels kept; a gratitude grows; the stories stir. And the characters who once made me sit down and listen to their story and tap it out on a computer keyboard at a frantic pace while I watched words spill onto the empty screen, those characters are still there in the back of my mind, smiling gently, remembering with me. It’s a little like sitting down with old friends and thumbing through old photo albums, remembering the people and places we once shared, pointing to this or that and nodding to one another with the shadow of a smile as we revisit things that fanned the flames of the story that we wrote together once upon a time. It’s a secret language of its own, between a writer and her people, a story underneath a story which only they and I will ever fully know.
Syai… is a different country.
If you haven’t been there yet, please do come by. It is a beautiful place – strong, and gentle, and savage, and glorious, and yes, shining. Let me show you its landscapes, its silks, its dreams, its amazing strong women and the language that they treasure and share with one another. Let me show you the secrets of jin-shei.