When the author realizes what her book means

Often an author doesn’t know what a novel is really about, what it means. That’s up to the reader. When writing it, the author is focusing on the story – the plot, the characters, the language, the setting.
I began writing ‘Midnight at Spanish Gardens’ initially because the setting so intrigued me.
Spanish Gardens was a real place, a restaurant near my university with a particular magic. It never seemed to change, and even after it was physically gone it remained young and changeless in the hearts and memories of those who left memories of love and laughter inside it. It had always seemed – even then, but all the more during the times that I recalled it to mind while writing the book – something of a true “dimension portal” through which it was possible to step back and forth in space and time and somehow always return to what was the core of you, the truth of you, your own true self.
And then I got suddenly and inexplicably sidetracked by a song from the early Eighties. I hadn’t through about it for years, barely remembered it at all, and yet somehow its long-forgotten lyrics swam up to haunt me – and I realized that this, distilled into a nutshell, is really what “Midnight at Spanish Gardens” is all about.
The memory of love. 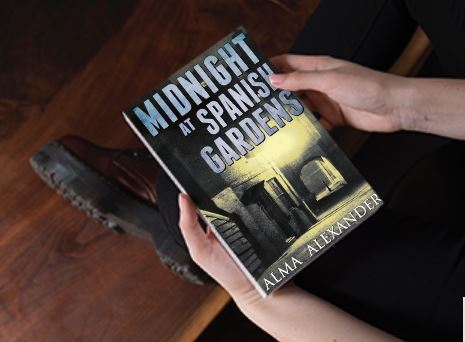 In Spanish Gardens, five friends meet in the cafe where they had celebrated their college graduation 20 years before. They reminisce – and reveal long-held and disturbing secrets about their dysfunctional lives. Each friend in turn is given a startling choice by an enigmatic bartender named Ariel — a chance to live a completely different life and later decide which life they will continue to live.
They are given a chance to shrug off the burdens which they think they are carrying – the petty selfishness, the betrayals, the losses, the frustrations, the anger, the incipient apathy of just accepting that ‘that’s the way things are’ and ceasing to fight against the current – and to start again, anew, with new lives and new visions and new potential. … except… except… except…
The questions and the secrets pile up like snowdrifts. Is anything really going to change if you shuck off this skin and wear another, so very similar? Is it possible to live a life without burden or drama? Do you WANT to?
And one way or another every one of these five characters finds themselves tangled in memories of love.
I had not realized it at the time I was writing the book – I am barely piecing it together now, myself – but looking at the lives that my characters have been given to choose from it all comes down to this. To love.
Sure, leavened with a heap of other things – but to love.
John’s life was shaped by the twisted heart of it (born of a selfish, overbearing father and a ‘concubine’, betrayed by his ‘parents’ and never really knowing his true mother; giving his heart to the young patients in the ward where a young doctor’s heart could only be shredded; loving a woman who never knew it, and never loved him back (in one lifetime) or whom he drove away because of his life’s circumstances (in another); finding a dream in which to pour his passion, and to do his best to try and save a world which is so often beyond saving…)
Olivia’s life was blighted by it (loss of her brother to war and her family to the aftermath of that loss; betrayal by the man she loved and her best friend; marriage to someone who was a temporary sanctuary, someone in whose shadow she could shelter and be spoiled and thus believe that she was loved – but finding out that this is not what love is; finding, at last, an understanding of what lies underneath and the true partner and companion of her life, but having to give up EVERYTHING that she knew and she was to do that…)
Quincey was so trammeled — married young, had children, widowed, remarrying the wrong man, finding the strength to leave him behind, pouring her love and her life into the children she was left to raise and who frustrate her in equal measure to her unqualified adoration of them. And then finding out, in the alternate lifetime, just how much passion she was truly capable of, and having to face a choice between a soulmate and those children she had borne to men who had never been that,
Simon, so wounded by it (his response to pain was to build a wall around himself so high that nobody could get inside it, and filled the void within with ambition, and dreams, and self-sufficiency, and loneliness, and selfishness, and selflessness, and ambivalence and confusion; being told once, by a lover, that all he ever did in life was travel through it in a train into which he would occasionally invite transient companions but off of which he would never step because that meant loving something hard enough not to want to let it go and he may have rendered himself incapable of doing that – until the moment that he realizes that he did not, and that the memory of love was strong enough to recall him to himself…)
Ellen, frightened by it, fatally lured by it (wanting it badly, reaching for it, and then running when it came to close, became too real – finally resorting to stealing what she thought she could not legitimately have – living with regrets in every lifetime she could ever have laid claim to…)
Five people, set adrift without a map back to a safe mooring place, alone in a skiff on a dark ocean. All of them somehow scarred by the lives they had led, all of them, in the end, somehow… alone.
They met in a place called Spanish Gardens, in a place where only truth can be told, and only the strongest memories can be held on to.
And they remembered… love.
That’s why I remembered that old song and realized the memory of love will bring you home
That is what I leave my readers with, a glimpse beyond the veil. Lift it, glance beyond; live life, dream dreams, seek happiness, heal wounds, have adventures.
And then remember. And let the memory of love bring you home.

You can get you’re your copy HERE