Creating the world where Were-kind live 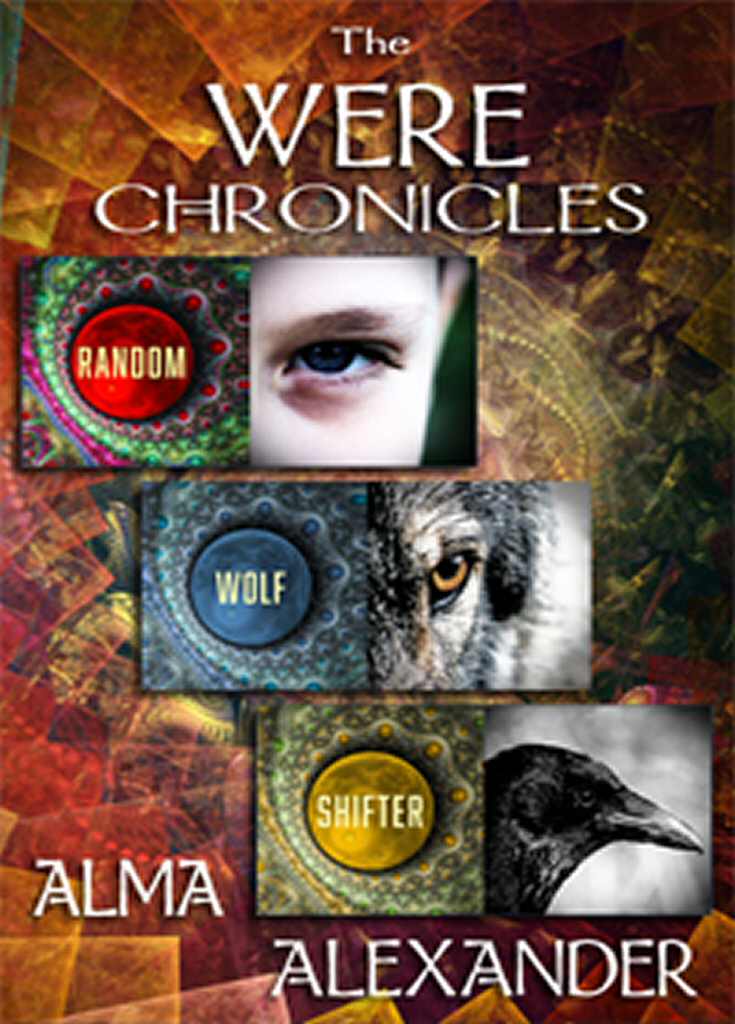 For works of fiction set in familiar worlds, the ones in which the reader already lives and is accustomed to, worldbuilding is a question of keeping things “real” – of keeping the sense of the familiar, perhaps even of courting recognition if you are setting your piece in a place with which you hope a subset of your readers might be familiar.
There is a measure of achievement in this, if someone whom you have never met contacts you with enthusiasm and delight about your setting, telling you that you’ve accomplished that “familiarity”, that you’ve nailed a hill town in Italy, or the streets of New York, or a souk in Morocco.
A large part of this is getting the details correct, not just the things you might see or visually notice but also a sense of the space around you, the sounds that assault your ears, the smells, the crush of people pushing and surging beside you (or their absence), and then the more subtle things, the stuff that makes up the social fabric, the knowledge of who greets whom first, and how, and who moves in whose social circles, the unwritten classifieds of a human culture and context. Even for works of fiction set in familiar worlds this can be a tall ask. But if you cannot immerse yourself in a place where you set your story, research will do a lot of the heavy lifting.
But for a work of fantasy set in a world which you have partly or wholly invented, things get an order of magnitude more difficult.
You are no longer out to cultivate a sense of familiarity, but rather a sense of wonder. And while you may have some “real” pieces to work with and on which you will rest the foundations of your world, the rest, the thing that you are going to build… that, all of that, you have to invent.
You have to make it up. And the thing you make up has to be solid, has to be believable, has to be a place in which your plot or your story or your characters could plausibly exist, and has to, in the end, achieve a quasi-existence in your reader’s head which allows them to dive in and let your world close above their heads. You have to create a completely alien setting, sometimes from the ground up, and yet your reader has to be left believing that they can easily and safely breathe of that air.

And they said writing fantasy was easy

Perhaps the hardest thing of all to accomplish successfully is a meld of any kind, where part of the world is real and part is your own fantasy invention grafted onto that stock. Not only does your invented part have to ring true against the “real” bits, the meshing has to be accomplished seamlessly, because if your reader can see where you stitched it together it stops being a believable world and becomes Frankenstein’s monster – with every bolt and screw showing.
Those were precisely the waters I sailed into when I began to write the story set in the world of the Were Chronicles.
In some ways, it is possible to take from our world, the one we all live in on a daily basis, telling details that become so very understandable in the New World of the Weres that I was creating.
There can’t be many people, at least in the cultural milieu that I grew up in, who are not viscerally aware of what it means to wear a yellow star sewn onto the bodice of your dress, or the lapel of your coat. You know what it means, instinctively and with a bone-deep response. You know that it means that something has been MARKED – that a quality over which an individual may not have any personal control has been picked as a defining characteristic of that individual by a more powerful group of people, and that it is likely to spell a doomful future.
You don’t CHOOSE the faith and the culture you are born into, particularly if you are a child or very young or even very old – you can’t just “un-Jew” yourself if you were born under that star, particularly if you aren’t given much of a chance to even state that you wish to. It is doubtful, if you were of this faith in an earlier and bloodier era, that your “conversion” from the faith of your fathers to the accepted Christian doctrine, under threat of the Inquisition, could ever be really taken as a truly voluntary act.
Although faith is one of the great symbols and is often and violently used to mark others as different and hateful just because of where they bend the knee – it is almost easy, compared to something that you have no say in changing at all. It is conceivable (with or without the “influence” of an Inquisition) that people could come to a different opinion about which faith, if any, to follow as they mature and acquire layers of adult experience with which they then engage their world. But there are things about yourself that you cannot change, even if you wish to.
I grew up in a South Africa where being black was against the law – where you had to have your “passbook” in your possession and had to show it on demand to prove that you had a right to be any place where a law enforcement officer thought you did not belong.
This is where my “paw” cards for the Were came from. The need of the dominant caste to label that thing that was not-them, the thing that could be dangerous and therefore to be feared and hated. From here, it was an easy step into legislating the Were.
In one sense the governing moiety, the majority, could always posit that the laws they were enshrining existed for a mutual protection and safety – things like Turning Houses, into which  Were-kind were required to report for their Turns unless they could satisfy the government that they had a place where they could lock themselves away for the duration. It was all done with the best possible intentions, with the light of the angels shining from everyone’s eyes. But all power corrupts, as we all well know, and sometimes it isn’t even power – it’s just opportunity. When unscrupulous, or over-zealous, or careless, or stupid, or simply more fearful than most, people are given (whether inadvertently or deliberately) oversight over the implementation of laws like these, and the ability to influence how they are applied in practice, things can go downhill very fast, with even the best of intentions paving that proverbial road straight into Hell. For some, at least. For those who are powerless to fight back or to influence their own positions on the totem pole, those who are forced to knuckle under to conditions others have decided, in their name, are “for the best”.
When, eventually, the inevitable limits of endurance are reached, and passed… well, this is where revolutions come from.

The two worlds of Weres

The scientific foundation of Were kind

I am in possession of an MSc in Molecular Biology and Microbiology – an advanced graduate degree which got used only for a handful of years before I threw it over and pursued writing as a calling instead. But it’s there, and it’s an accomplishment, and it’s a diploma with my name on it, and I have always had this interesting relationship with DNA and the building blocks of live. So when this story came along, I leapt at the opportunity to go back to these roots and dust off that diploma in the service of my fiction.
I looked at this at the level of cells, and genes, and DNA itself. In the worldbuilding sense, there is probably no greater detail that can be gone into than this. Using the normal nominal human as a base, as a palimpsest, I worked out a way in which Were DNA was different, how it fit together, how it triggered the changes of a Were, how the changes could be regulated at the cellular level.
And a whole subplot of my story arc – perhaps the most vivid and overarching one – hinged on this, on the details of the genetics and the physiology and the pharmacology, and on how such things worked to create a class of creature which would be forced to live and act in a certain way and whose actions, controlled by this most basic of all laws, then informed the kind of society that they created.
The possible genetic background of the Were-kind fascinated me. How and why Weres might function, might tick, might be remotely possible. I sat down and I WORKED IT ALL OUT. I also addressed other issues, such as what happens to the mass differential when a grown human being changes into something like a 14-pound cat, or a crow, or a grizzly bear – something that is not directly comparable to that original human’s footprint in the world. I took a fantasy trope and I laid it out on the dissection board and I did a meticulous study on its innards – because science, because cool. I had an immense amount of fun doing it.
And it is one of my hopes that someone, somewhere, might be intrigued enough to follow up, to ask their own questions… to create their own worlds, perhaps, using science. The marriage of science and fantasy is a powerful one indeed, and one that blew away the boundaries of my own universe until it left me floating breathless and free amongst the stars.
The other issues I spoke about before – the more social-science aspects of this story – might be more important reasons as to why these books are amongst the most relevant, the most important, and possibly the best things I’ve ever written. But the science was the reason it was so much joy to create. I got to be all of myself, all of my scattered bits and pieces, and these books are more completely ME than anything else ever. All of the questions I have asked here have important real-world answers – and all of those questions live and are rooted in the world that I have created here for them to be safely asked in and explored. And all of THAT is rooted… in the building blocks of the world, in the worldbuilding, in the details with which the world is brought to life.

It is said that the Devil is in the details – and if this is so the worldbuilding is neither more nor less than chasing down the Devil, and then hanging on for dear life when you’ve got him by the tail.
I’m thinking I have walked down the road a good long way with the Devil at my side, when it comes to the Were Chronicles. Because this is a world that rests on so many interlocking details – so many glorious interlocking details. If every piece of fiction is a window into a world, then this window is made from exquisite pieces of stained glass, and when the light comes shining through it the effect is sometimes breathtaking.
This feeling, this looking out over a world well made, is what the joy of writing is all about. And for all the dark questions that they ask – for all the light they try to shine into the dusty and sometimes grim corners of our shadowed existence as human beings – ‘The Were Chronicles’ are books which were written, and created, and shaped with that joy.
I hope you will visit that world. And I hope you find in it the enchantment with which it was made.