Creating the story arc of the luminous Babylon 5 series

The first time I crossed paths with the TV series Babylon 5, it was a disconnected episode from Season 2, Confessions and Lamentations – the Markab plague episode.
I did not know then, as I know now, that B5 was a dedicated arc of a story and that this was just a particular piece of that arc – it would have been near impossible for me to make “sense” out of that particular episode, seen in isolation. With B5, you need the context.
And yet. And yet …
Such was the power of this particular episode that for a long time – and it was a relatively long time before I settled down with complete seasons of B5 to watch it from beginning to end – it stayed with me. 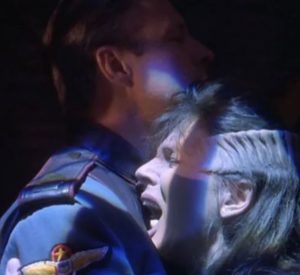 That image of Minbari Ambassador Delenn quietly going into station Captain Sheridan’s embrace, her face a mask of agony, behind her only a grim and grieving Lennier and a mass of dead Markab people, that stayed with me through the years. That image goes in the dictionary next to the definition of grief too deep to be spoken aloud.
I remember snippets of the episode in pieces of dialogue.
The exchange between Delenn and Sheridan, which might have been the beginning, or one of the beginnings, of their deeper relationship:
“All life is transitory: a dream. We all come together in the same place in the end of time. If I don’t see you again here, I will see you in a little while in the place where no shadows fall.”
“Delenn…when I do see you again…call me John.”
Delenn meeting up with a random lost child who has lost her mother and instructing her assistant Lennier to find her – and he said, not unreasonably, “How?” looking around at the mass of refugees piled at his feet. Delenn tells him, “Faith manages”, and it is with an echo of that phrase that Lennier does effect the reunification of that little family. And yet in the instant of “faith manages” the child staggers and begins to fall, the first sign of the plague without a cure, and over her head Delenn and Lennier can only exchange a wordless and agonized glance of comprehension of the inevitability of what is to come next.
Out of the vault, Dr Franklin working against time to find something, anything, that can be used to stop the march of the plague, using a Markab he might have called a friend to observe the progress of the plague, hoping that he will be able to find a way to stay the inevitable death before it claims the brave volunteer who  has offered up his suffering in the cause of science. While Franklin, in character, wears himself out and shreds himself into strips of frustration and fatigue in order to find his solutions, his patients provides an interesting thought:  “Sometimes, the test is not to find the answer but see how you react when you realize there is no answer.”
When Sheridan does eventually order the Markab isolation vault opened, to the sight of every last Markab in there lying dead, only Delenn and Lennier are left standing, statues to unimaginable misery.
And then that scene, the one I recall so vividly, with Delenn taking a few steps towards Sheridan and then simply whispering, “John…”, in an echo of that request from him in the earlier exchange, before her face collapses into a silent scream.
Later, Delenn also says they should take from this experience a greater sense of faith, compassion, and charity. Sheridan can only reply, “I hope so.”
That hit, and it hit hard.

The Purity of the story arc

When I returned to the beginning I was already primed for what B5 would be. Sure, it had its rough patches, like everything else does. But the purity of the arc of this story remains almost unique in the history of EVERYTHING, not just SciFi shows on TV.
What B5 did with its characters was unprecedented, and remains almost unmatched to this day. 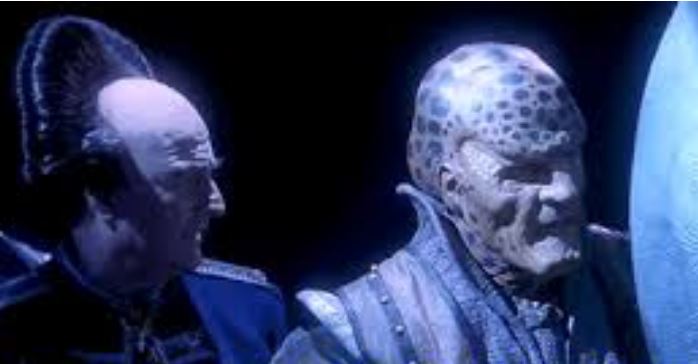 In particular, there’s the remarkable development of the Londo-G’Kar relationship. It starts in caricature comedy – G’Kar is a thug, Londo is an effete fop, they’re literal stereotypes.
Then they change, both of them, they grow and they change, in the series it’s Delenn who goes into a literal chrysalis and transforms into something different, something ELSE, but G’kar and Londo do no less over the course of the B5 arc. They grow in stature as their original comedy morphs into a luminous tragic conclusion – they both end as a sort of saint, but with G’Kar rising to it through a distillation of the increasing purity of spirit and understanding of the soul of the universe and Londo achieving it through consciously choosing sacrifice towards a higher calling, that of his people – a martyrdom that is almost impossible to bear.
Enemies to begin with (with an unbreakable wall of hatred between them); honorable adversaries as their histories progress; unlikely friends, at the end. There is a heartstopping moment between the two of them, as Londo goes to his fate, and G’Kar understands – and G’Kar, the thug, says to Londo: “My people can never forgive your people. But I… can forgive you.” And Londo’s response to that, unspoken, all in his eyes, as the two of them clasp hands, knowing that this is a farewell.
I’ve seen this series several times now, straight through from the beginning. And there are moments, like that one between G’Kar and Londo, that make me weep every time.
Moments like the absolutely luminous series finale, “Sleeping in light”, which I always sob through.
Things like this, they’re formative. They make their way into your psyche and they become a building block of the person that you are. Delenn lives in me; Sinclair does; Ivanova does; and if I am very lucky indeed there is a sliver of G’Kar in there too. These characters – born of someone else’s mind and heart – have found a home in my own, and they change the way I see the world.
“I don’t understand,” you might say, as Sheridan did to Ambassador Kosh of the mysterious and powerful Vorlons, and I make you the same reply that Kosh made to him – “Good”.
These things are not to understand. They’re to wonder at.

What occasioned this essay was a recent live discussion panel I watched with three of the B5 stalwarts (Bruce Boxleitner (Sheridan), Claudia Christian (Ivanova) and Walter Koenig (Bester)). They all sound grateful and yet still a little bemused at how much of an impact those particular characters (amongst a range that they’ve all played in their careers) have left on a dedicated fandom, even these many years, even decades, later.
We have already lost so many of the B5 stalwarts. The actors who gave life to G’kar, Sinclair, Garibaldi, Dr Franklin, Zathras, and others, have all left us – and we are in line to lose others, as the original cast ages and inevitably faces their own passing. I will mourn every one of them, when they do.
It was a privilege to be able to be present in a moment when some of the bigger names in the series are still here with us, and to share in their own memories of the phenomenon that was Babylon 5. All I can say is that it was… extraordinary.
In Valen’s name.
It may be time for a re-watch.