A year of reading an author named Alma

A few days ago, I posted a monthly reading list of novels about transcending loss, discovering the past, glimpsing the future, or simply offering the gift of laughter. Today I offer another reading list, but this time picking from my own books. 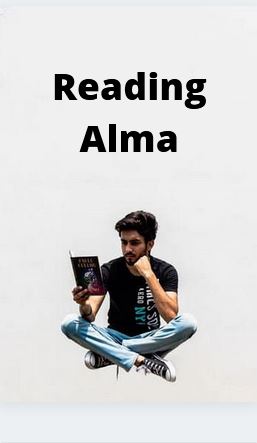 Month 1: Transcending loss – ‘Letters from the Fire’ – an epistolary novel told in emails, about war and love and courage and loss of country. It’s fiction, but this one is deeply rooted in a very recent historical past.
Month 2: Laughter – ‘AbductiCon’ – When SF/Fanasy convention leader Dave Lorne realizes the whole hotel is lifting off the ground after a silvery man enters something on a strange tablet, he blurts out, “Put us back!”
The silver man looks at him with a curiously cocked head and says with something like regret, “I can’t do that, Dave.”
The fan-filled hotel has been kidnapped and taken for a jaunt around the Moon while their abductors, time traveling androids, search for their creators.
Month 3: Rising to your gifts – The Worldweavers series, temporarily out of print, is the story of an American girl who couldn’t even cast the most rudimentary spell in a world run by magic, but then grew up to be the greatest wizard in the world.
The four books – ‘Gift of the Unmage’, ‘Spellspam’, ‘Cybermage’ and ‘Dawn of Magic’ – will be  republished, I hope by the end of the year.
(I need help for this project and am raising funds for the new covers, which will cost at least $2,000. If you wish to help,, you can donate either via the Facebook fundraiser, via PayPal, or by joining my Patreon at $5/month.)
Month 4: A bit of history – ‘Empress’, a story which is based on the immortal love story of Emperor Justinian of Byzantium and a girl from the Hippodrome named Theodora who became an Empress. This one’s alt-history, or historical fantasy – but it skates quite close to the real tale. Pick it up, read it, and you might be moved to find out about the Real Thing, afterwards…
Month 5: Through a glass darkly – ‘The Were Chronicles’, OMNIBUS edition, Dec 8, 2020
Young Jazz Marsh, a Random Were able to Turn into any warm-blooded creature she sees, Turns into something impossible, throwing her family and the Were authorities into a frantic spin.
Her brother Mal, frustrated beyond reason by his own delayed first Turn, chooses his own destiny and infiltrates the shadowy Lycan clan in order to help expiate his guilt in his older sister’s death.
Chalky, his best friend, is a true Shifter who is capable of Turning into anything he pleases unconstrained by the rules of Were kind.
Together, they work to turn back a shattering tragedy, solve a conspiracy-shrouded mystery rooted in their own kind, and work to preserve their own existence against a rising tide of superstition and hatred.
All they wanted to do was save a life. Instead… they started a war.
Month 6: Art – Um. I have to give you a rest this month. i don’t do visual. But if you want another medium. I have books out as audiobooks (currently ‘Embers of Heaven’,’Gift fo the Unmage’, ‘Empress’, and ‘The Second Star’.
Month 7: Poetry month – I DO have a book of poetry out, which my father was instrumental in getting published when I was 18 years old. There aren’t many copies about. But I give you leave to read other poets, instead. Or email me and ask me for a poem. I’ll send you one.
Month 8: Visual art in story – I have a story that won a competition run by the BBC, no less, about a painting. It’s called ‘The Painting’. You can find it in ‘Weight of Worlds’, a collection of my short stories (only in eBook.)
Month 9 : Writers from another continent. Well, I’ve lived on a lot of continents, so wherever you are right now you can make a case of picking ANY of my books and you’d be safe. But I suggest ‘Midnight at Spanish Gardens’ because it is about a real place which I left behind on another continent a long time ago. And it might bring up some memories of your own.
Month 10: Visit the Past – Try my Jin-shei books – ‘The Secrets of Jin-shei’ and ‘Embers of Heaven’. They are alt.history/historical fantasy but they are rooted in Imperial China and the Cultural Revolution, respectively. I did a ton of research for these books. They may be fantasy but they are truly “historical” in their own way.

Month 11: Jump to the future, ‘The Second Star’ – my latest novel. It is about the big eternal questions – about who, or what, God is; about our own immortal souls and their salvation; what it really means to be human; and whether it is possible to go out to where the monsters dwell and come home again unchanged. It is a story of how humans meet the stars, and find themselves there.

Month 12: Visit “my books” at www.AlmaAlexander.org and plan a year of my books for somebody…? (If you want to plot, you can always let me know and we can get them signed.)