Help me bring back a great series

The girl who became the greatest wizard of all

I first wrote the Worldweavers series as a trilogy published by Harper Collins.
It told the story of the girl who was a bitter disappointment because she couldn’t do any magic at all despite a heritage that should have meant she would be brilliant at it. Yet, over the course of the series, she grew up to be the greatest wizard who had ever lived.
The HC editions were beautiful – hardcover and paperback, amazing art – but they happened during the publishing “Bloodbath of 2008″. I lost two editors and four publicists within a year, including a very senior editor who had been a strong advocate for these books.
After the editors and publicists were gone, the trilogy withered on the vine. The third book never even made it out of hardcover into a paperback edition.
The rights eventually reverted to me, and I gave the novels – plus a fourth book which tied up the whole storyline into a neat little package – to a small press. The cover for the fourth book was great, the first three less so, and the formatting, publicity and distribution were … a little lackluster. 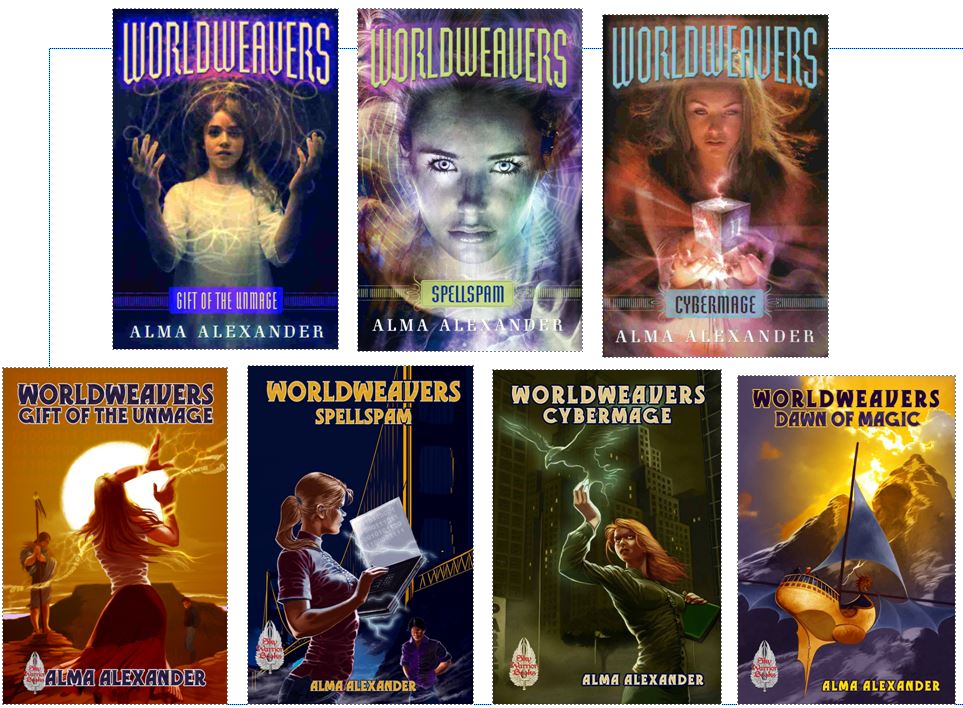 The rights eventually reverted to me again from that small press, Now I want to reissue the whole series in a PERMANENTLY-IN-PRINT format with covers that they deserve. I have a vision for this – and it’s going to be EPIC. I’ve talked to a few artists but it isn’t going to be cheap. So I need your help.
These books are a Schrodinger’s YA fantasy series; critics said that they were both utterly original, and at the same time enough like a certain boy wizard that VOYA said: “For readers suffering Harry Potter withdrawal, this series might just suffice.”
Whether you love HP, or don’t; whether you read YA , or don’t; whether you just like the stuff I write and want to keep it out there – please consider supporting the fundraiser that will produce these covers and let these books come back to life.
Anyone who pledges $50 or above will receive signed copies, but any spare change will do.
Here’s what you’ll be contributing towards. I am envisaging a set of four covers which “flow into one another” so that if you put the books end to end you end up with one large “big picture”, flowing from Book 1 to Book 4, highlighting individual things from the individual books.
For instance, the second cover (for Spellspam) would feature a combination of a hint of location (San Francisco) and a hint of the book’s content (a computer keyboard or screen.)
I need to discuss the details of this with the artist I choose, but if you have any questions – or even suggestions about what you think should appear on each cover – please let me know!

How you can help

If you’re on Facebook, you can do it directly through the FB Fundraiser page HERE
If you are not into Facebook, you can go through PayPal HERE
and just type in the amount you want to contribute.
One more option:
You can join my Patreon HERE
at $5/month and commit to at least 1 year
~~~

One thought on “Help me bring back a great series”