I just, JUST, had a new novel come out – “The Second Star”, now doing the rounds in Paperback, eBook and Audiobook editions and garnering reader responses and reviews that are making me very happy.
I have spent most of last month doing the Publicity Push for this, but now it’s been shoved out into the middle of the pond as hard as I could shove it and it’s on its own.
What does a writer do in a moment like this…?
Well, start a new book, of course.
So here I am sitting at my computer and doing… something huge. 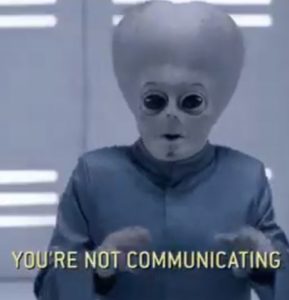 I am literally creating an alien language. Yes, from scratch. Yes, grammar and everything. Yes, I am marginally insane. I don’t want to shoot my wad here by telling you the details but let me give you some sweet little hints about it.
One, it is a language that changes with the development of the entities who speak it. It’s mostly spoken in the early stages, but there is a telepathic component to it which increases with age until the massively old do not speak at all – they communicate only mind to mind.
When these folk encounter us, the human who first trips over one of them gets an inkling of this and names the two languages, the Language of Light and the Language of Shadow. In her own vernacular, because she’s Italian, that’s “della luce” and “dell’ombra”.
Obviously mind-to-mind communication erases grammatical obstacles as such. But the “della luce” language IS grammatical and that means learning the rules. Let me get back to that in a minute. Let me digress just a little into one of those delicious “rules”.

This is a language with several variants of a future tense, indicated by a prefix to the sentence being uttered.
One – the IMMEDIATE future (as in, this thing I am speaking about is already in the process of happening, and this is what will occur when it finishes happening – but it’s already in process, and inevitable, and immutable).
Two – the LONG TERM (FIRM) PREDICTIVE future (as in if THIS happens then THIS will happen, as a consequence – it’s an empirically provable future, one where there are dots between “now” and “then” and the dots are connectable in a unique and highly specific manner).
Three – the LONG-TERM POTENTIAL future (as in, if THIS then MAYBE THAT – something that isn’t a given, something that can be altered by circumstance or context, indicating a high degree of uncertainty).
Four – the FUTURE NEGATIVE (another very empirically specific one, as in, if THIS then NEVER THAT and it’s something you can bet on).
As you can begin to get a glimmer of, this is a language that both shapes and is shaped by a particular mindset, a particular alien culture. I am building a world, from scratch, and it rests on the foundations of language because I am a language nerd and I roll like that. I am both enjoying myself immensely and banging my head against a brick wall, because… well… let’s circle back to that thing I said we would return to.

This is an alien species with its own language which WE HUMANS DO NOT KNOW. There is NO Rosetta stone here that we can rely on. And yet I have to create one because these two species, whose stories entwine in this book, need to, well, communicate – because without talking to each other and conveying important information the story quickly grinds to a halt because nobody knows what anyone is thinking or doing and the two stories of the two entities involved continue running on parallel tracks which ne’er will meet and there is little purpose to following these parallel tracks to the horizon because only one half of the story I am telling is visible to anyone on either track.
Which means that I have to figure out a way to make these two species without a common language… bridge this communication gulf somehow. I have to do it early enough for there to be room left in the story to tell the actual STORY as opposed to telling the story of how the language problem was solved, and I have to do it LATE enough for the whole thing not to be dismissed as deus-ex-machina legerdemain handwavium, something that happens because the author waves a god-like hand in exasperation and simply says, well, OKAY, they can damn well TALK to each other now, let’s get on with it.
See my problem?
I’m spending my quarantine learning how to talk to aliens. I hope to convey my findings to all y’all in due time in a reasonably coherent fashion.
Why? What else did you think I would be doing?
~~~