Flying by the Seat of Your Pants

Writing off the map

It’s a favorite panel topic at science fiction conventions – scratch around in any con’s program and some variation of “pantser or plotter?” will pop up, like you’re playing Whack-a-Mole.
You’d think people have heard everything to be said about that subject already – and yet it’s a perennial of enduring interest and fascination and there are always interested people in the audience, readers trying to understand the writing process, writers seeking validation for their own way of creating a story. And there’s the basic thing. It’s an individual process. You simply cannot sit up and categorically state this or that is “better”.
There are writers out there who swear by things like Scrivener, which allows them to plot at the level of SCENES; there are other writers for whom that very idea is such anathema that they recoil from it, making the sign against the evil eye. What works for THIS writer and does not work for THAT writer is not in itself good or bad. It’s like fire, in that. It’s a good servant, but a very bad master.

Pop a story seed into a pot

When I get put on these panels, I am… possibly… worse than useless. I cannot transmit advice on this topic; it is absolutely no use asking me how I do things. I am a total organic pantser, and as I am fond of telling people in metaphorical terms, when I write, I pop a story seed into a pot and until it sprouts, I don’t know if I have a redwood or a lettuce on my hands. The idea of plotting out a story in detail before I write the thing absolutely horrifies me – and would murder that story because that part of my brain that is the story creator will simply see that story as having been written already, and will lose interest in doing so again.
No, my stories have to happen first, without trammels, without scaffolding, without a net – otherwise they cannot fly at all.
People ask me, “how do you create your characters?” – and yes, I know writers who do character charts, who create a character as they would do one for a role-playing D&D game, they will do a character sheet with every last detail about that character on there, and no I don’t just mean height and eye color I mean their difficult childhood, their phobias, their obsessions, their allergies, their triumphs and their disasters, their family tree to the nth degree.
Those are the plotters, the meticulous people who need to have every last duck of a character trait in a row before they can ink one line of story about that character. I’ve also known people whom I find difficult to classify, people who are capable of writing a character of great granularity but with a “placeholder” name (“this is the story of X…”)
When I am asked for an answer to this, I have to grin sheepishly and say that I do not create my characters at all. They step out of a wall or a tree or up from the ocean surf or down from a cloud, and they stick out a hand for a peremptory handshake and a brusque introduction (oh, they KNOW their names…) and then they demand that I sit down and take dictation.

THAT’s how I ‘create’ my characters. They come and they bully me into telling their story. I am just the filter-mind, and the hands of the amanuensis. If I do it “wrong”, or try to willfully alter some story detail so that it accords better with my own vision of the story, my characters go on strike, stop talking to me at all, and the whole story stalls. One character sat on my bed at night kicking the side of the bed with his heel rhythmically and sullenly for hours so that I couldn’t get to sleep at all, and kept insisting, “I didn’t SAY that.” (I fixed it according to his fiat. And dammit I hate it when they are right…)
People ask me, “how do you create your world?” I know there are people who draw detailed maps, and people who have entire histories written before they ink a word of the actual story that they are setting out to write… those too are the plotters, the meticulous ones who know every corner of their world, even those they have never been to and have no plans to visit. They need to know of the existence of those places, in advance. That information is the bricks with which they build their worlds, and they need every brick in place.
Me… I wake up with a memory of a world in my mind. If I need to know something, I rummage around for it, and it’s there. For the plotters, it may be necessary to produce a “story bible” in place of memory – for pantsers, it’s in the memory itself, a memory they somehow acquire without knowing how or where it came from. And it’s a detailed memory, and very different from the practical everyday kind that is so necessary for a rational existence in the “real” world – I can’t remember a computer password, or an important phone number, but I will remember what happened in a world of my imagination four hundred years ago, in shining detail, in minutiae. It’s a peculiar almost-disability, that. You can get lost in those memories.
I’m going to start throwing out metaphors now, with both hands. 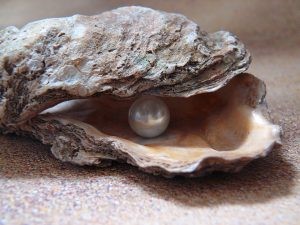 A plotter is a master jeweler – the craftsman who meticulously shapes stones and etches metal until there is a breathtaking treasure before you, intricate and every bit of it carefully planned, a diamond cut so that it reflects light and carries fires inside its heart. A pantser is an oyster, patiently receiving a piece of grit and accreting layer upon layer upon it until all that is left is a luminous and flawless pearl and the memory of the irritant at the heart of the jewel without which there would be no pearl is almost a myth lost in time.

Plotters are the Princes of the Church.

If you think of writing as a kind of vocation, then your plotters are the Princes of the Church, worldly, sharp, able, at ease in the tramelled webs of interconnectedness, spiders spinning their webs, making plans, putting in the hours, administrators, organizers, benevolent dictators – the Abbots and the Popes of the world. Your pantsers are the priests and the monks and the nuns. They don’t understand faith so much as feel it and sense it and practice it from the point of purity and devotion and no organization at all, they just love God and that love is between God and their own soul and nothing of this world stands between them. Theirs are the beatifying visions, the miracles, the path to sainthood (to which they often can’t be ‘officially’ lifted without the ecclesiastical administrative fiat… but THEY know what they are.)
The thing is, there is pretty much no way of telling, if all you have is a text sample, whether a story was arrived at while filing detailed flight plans or while flying without instruments.
Pantsers and plotters may be two different species of writer but in the end they offer up the same thing – the Story, which they have arrived at, which they have crafted, which they have molded, in the best way they know how. I, in my ragged Pantser robe, standing barefoot and with loose hair in the middle of an empty field full of wildflowers… and the Plotter over there, riding a richly caparisoned palfrey along the designated road. There’s a shining city beyond the next hill, and we both know that, and we are both bound there, in our own way.
In the best possible outcome we will meet in a tavern and raise a glass to one another, in the name of the God of Word that rules over us both – and the gfts we have to bring, so very different, will be received as offerings with equal joy by the people at whose feet we have come to lay them.
In the end, that is all we have to do.
Write.
~~~
This essay first appeared at Book View Café HERE