Your Brain Will Explode

Any occasion where a D.B. Jackson novel is unveiled would be notable. His new work involves that most headache-inducing of concepts, Time Travel. And here he is, to tell you more about that.

Only a great fool would even consider writing a time travel novel, much less an entire series rooted in time travel. I should know. TIME’S CHILDREN, the first novel in my Islevale Cycle, a new time travel/epic fantasy trilogy, comes out from Angry Robot Books on October 2. (It will be available from all booksellers.)
Friends warned me about delving into the uncertainties and complexities of writing time travel. “It’s SO confusing.” “The plotting is a nightmare.” “Your brain will explode.” 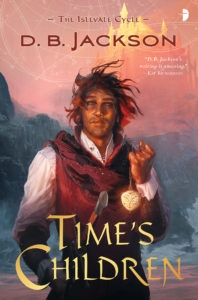 All of this, it turns out, is true. But to my mind, the confusion and complexity isn’t the biggest problem with time travel. On the contrary: the intricacies are part of what drew me to this project. To my mind, the trouble with writing such stories lies elsewhere.
By way of illustration, consider the third Harry Potter book, HARRY POTTER AND THE PRISONER OF AZKABAN. In this novel, J. K. Rowling introduces us to the Time-Turner, a device that allows anyone encircled by its golden chain to travel back in time. Hermione has been using it to fit in an extra class or two so as to feed her inner geek. But as things go south for our heroes, they decide to use the Time-Turner to save a few lives and defeat the bad guys, which seems like a good choice. The problem is, the very existence of the Time-Turner calls into question everything that happens in all the Harry Potter books. If such a device can be used to make an academic schedule more accommodating, why wasn’t it used for something a bit weightier, like, say, preventing the murder of Harry’s parents by the most dangerous wizard in the history of the world?
Put another way, the problem with introducing time travel to any story is that it makes every plot point, every twist, every setback for the good guys and the bad guys negotiable. Unfettered access to time travel gives everyone a perpetual do-over.
In a sense, this is a problem for any fantasy magic system or science fiction technological innovation. Without limits and costs, they can take over a narrative. With this in mind, I have done a great deal in the Islevale books to circumscribe the reach of my time travel. Time Walkers are rare. They must be trained. They have no access to the future. They can move backward through time, and then forward again only as far as the moment they left. They require a magically “Bound” device, called a chronofor, in order to Walk. They cannot carry weapons or money, or anything else when they travel through time. They can’t even wear clothes. Walkers risk going mad if they meet themselves in the past. When they Walk, they pass through a tortuous “between” that is airless, painful, and psychologically taxing. And for every day they Walk, they age that amount.
That last point may be the most important one. My heroes, Tobias and Mara, Walk back in time fourteen years – the very limit of what their bodies can endure. They leave their own time as fifteen-year-olds and arrive in the past as twenty-nine-year-olds. At least physically. Their minds and emotions remain as they were. If and when they find a way to return to their own time (plot point!) they will age another fourteen years.
Limitations. Obstacles. Costs.
And yet, even with all the restrictions I have built into my magic system, I have still encountered one plotting issue after another as I’ve written the books. (I have recently completed the first draft of the second book, TIME’S DEMON. I’m revising now and will submit it soon. It will be released in May 2019.)
For example, in the second book, one of my Walkers meets him/herself in the past, and goes insane. The version of him/herself the Walker meets remains sane for the moment, but eventually the two iterations of this person will converge in a single insane individual (the details of all this don’t matter right now – they’re clear in the book).
A dilemma for my character, right? Well, I thought so. But I had written a bunch when I realized there was nothing to keep the sane Walker from going back a few hours with a warning to prevent the chance meeting and thus stave off insanity. Crap. So I needed a solution. Something to prevent the prevention, as it were. And I came up with a solution that I think is pretty ingenious (you’ll have to read the book…). Again, though, the example illustrates the issue. If we’re not careful, our time travel will render every plot point too easily fixable and therefore insignificant.
In the end, all the trappings of fantasy, science fiction, and other forms of speculative fiction are secondary to the elements of storytelling that truly matter. Those of us who write in these genres traffic in magic, futuristic tech, the supernatural, and, yes, sometimes time travel. Ultimately, though, our stories are about character and relationships, about emotion and tension and conflict. The key to using plot devices like magic and tech is let them serve the story without taking over the story. Time travel may be more unwieldy in this regard, it may create more complex problems and demand more careful management. But, for me at least, that just makes it more challenging and therefore more fun. As long as I can control it, and keep it from undermining my narrative goals, I’ll continue to play with it, and I’ll have a blast doing so.
*****
Thanks so much to Alma for hosting me today!
*****

D.B. Jackson is the pen name of fantasy author David B. Coe. He is the award-winning author of twenty novels and as many short stories. His newest novel, Time’s Children, is the first volume in a time travel/epic fantasy series called The Islevale Cycle. The book will be released by Angry Robot Books on October 2. The second volume, Time’s Demon, will be released in May 2019.
As D.B. Jackson, he also writes the Thieftaker Chronicles, a historical urban fantasy set in pre-Revolutionary Boston. As David B. Coe, he is the author of the Crawford Award-winning LonTobyn Chronicle, which he has recently reissued, as well as the critically acclaimed Winds of the Forelands quintet and Blood of the Southlands trilogy. He wrote the novelization of Ridley Scott’s movie, Robin Hood, and, most recently, The Case Files of Justis Fearsson, a contemporary urban fantasy.
He is also currently working on a tie-in project with the History Channel. David has a Ph.D. in U.S. history from Stanford University. His books have been translated into a dozen languages.
He and his family live on the Cumberland Plateau. When he’s not writing he likes to hike, play guitar, and stalk the perfect image with his camera.
http://www.dbjackson-author.com
http://www.DavidBCoe.com
http://www.dbjackson-author.com/blog/
https://twitter.com/DBJacksonAuthor
https://www.facebook.com/DBJacksonAuthor/
http://www.facebook.com/david.b.coe