“Dune” did it to incredible effect. Asimov’s Foundation series did it beautifully. There are other books where this was used to enhance and deepen the worldbuilding.
I am talking about epigraphs, quotes that open chapters or sections of novels, quotes which often come from Science Fiction or Fantasy worlds that do not exist outside the book being read.

The Ages of Mankind

When I wrote “The Secrets of Jin-shei“, I used epigraphs to define the Ages of Mankind, as seen through the eyes of the culture and beliefs of my imagined country of Syai – Liu, Lan, Xat, Qai, Ryu, Pau, and Atu.In that order, they cover emergence (birth and babyhood), growing (childhood), coming of age (becoming adult), reproducing and replacing one’s self (the age of childbearing), the secondary stage of reproducing and replacing one’s self, and growing old (sliding into senescence), the sunset and twilight of one’s life (death), and that existence that bridges the end of the last life and the beginning of a brand new one, a sort of hovering in the waiting room of the gods (the closing of the circle). 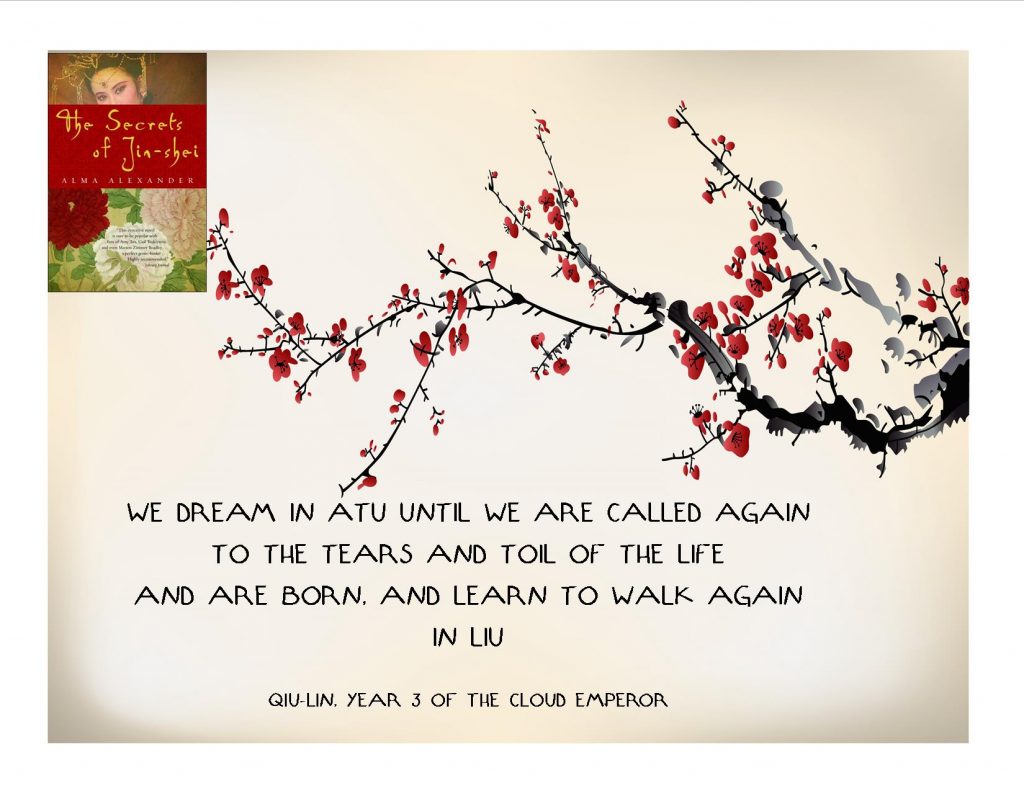 What emerged as the quotes for each section were these delicate ‘Chinese’ poems, fragile and ethereal, almost written by brushwork rather than typed on hard keys on a computer keyboard. They were astonishing to me, who created them, but they had a sturdy reality – despite their tender fragility – which served to anchor my new-made world firmly to a reality which would not otherwise have been possible. There is a power here which is difficult to define, but which is palpable. This would not have been the book it is without the epigraphs which serve as the scaffold on which the entire structure was built.
I did a similar thing with the follow-up to that book, “Embers of Heaven”, where the epigraphs came from various works of reference and literature and liturgy. Imaginary, all. But, again, the quotes serve to anchor the novel into its world, a world where these books existed, where they would have been recognizable and familiar to someone of that world, of that culture. They anchored my own mind in that world, in the way it was thinking and feeling, in the unquestionable reality of its existence.
This is powerful stuff. Even now, rereading the material, years after it was written, I find myself transported straight back into the world of Jin-shei by these quotes. 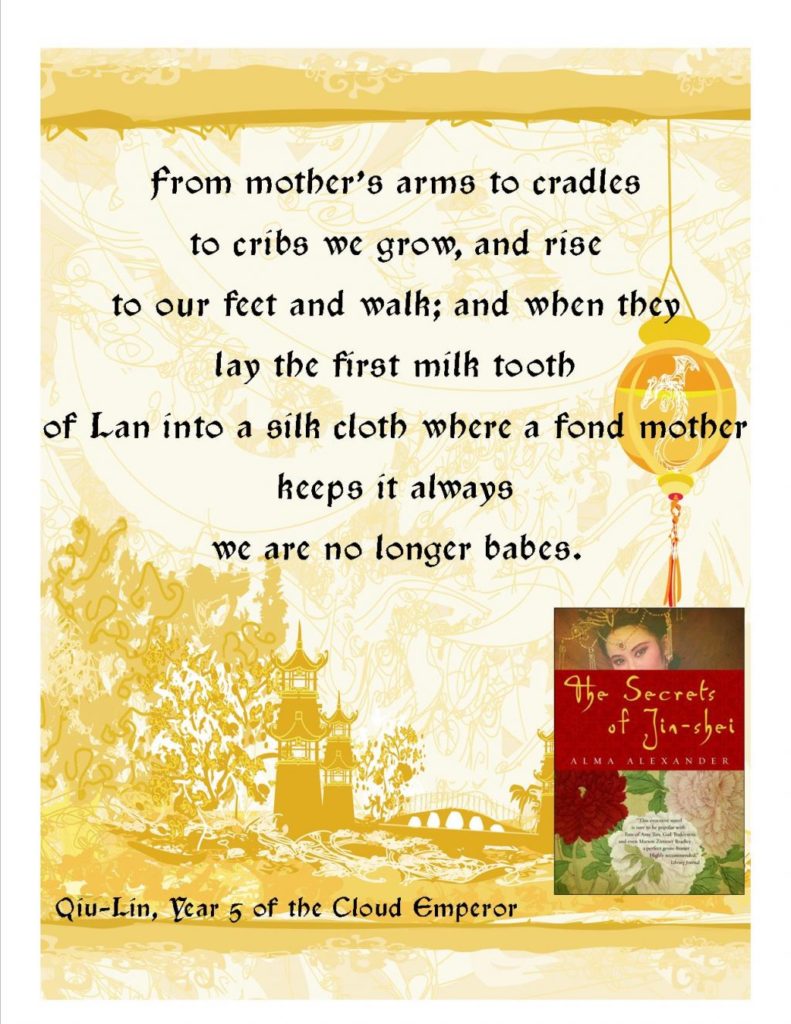 The right epigraphs, even if they have been as wholly invented by an author as the novel which they anchor, serve to link the words of fiction to a world which is only a sideways step from our own, as real as that which we see when we look out of our own windows. They serve as windows, also, and they allow the reader of a book to glance directly into the mind of its writer, and understand more completely the fictional realm into which the writer has led them. The epigraphs are the keys to a massive door which open into a place which we may not have ever seen before… but which, because of those imagined yet easily recognized quoted words, we *know*.
I’ve built a series of posters based on those Ages Of mankind, the first two enclosed here. I’ll post the others at another time.
~~~~~
HELP ME BUILD NEW WORLDS: As publishing changes, most authors need new sources of income. If you would like to help me continue writing about wizards and Weres, Jin-shei sisters, and girls who rise from the gutter to Empress, consider pitching in with a small monthly pledge. For the cost of a latte or two you too can become a patron of the arts. Details HERE