Children of a Different Sky

Telling the stories of war and exile

The time has come for the stories from the edge of darkness, from the ragged edges of silence, to be given a voice, and through that voice, the help that is so sorely needed. What I have to offer as a writer and a teller of tales is a way to shine a light into some of the most painful conditions that a human being can endure:
The almost impossible to comprehend existence as an exile, as a migrant, as a refugee.
“Children of a Different Sky” will be a crowdfunded anthology which will provide a stage on which those stories can be presented to the world… and also, as a crowdfunded charity anthology, to collect donations which will be passed on to organizations working to help the dispossessed human tides of our era.
This project is a collection of stories, some by authors you might recognize quickly; others, from perhaps unfamiliar writers who might have a more intimate, more visceral, connection with the subject matter.
I am one of the unmoored myself, although not one of those truly adrift. I have never been forced out of a home, or a country, or made to go to strange places I could not understand, against my wishes, terrified and frozen.
But I did leave the country of my birth aged 10, never to live there again. This does not mean I ceased to love it – this is the ground where the bones of my ancestors are buried, where their ghosts walk. This is the place where the river I love so much runs eternally between shores of mud and thistle and weeping willow, the place where a sliver of my spirit lives still, lives always. So I understand, on that visceral level, what it means to be FORCED to leave a place one calls home.
I feel for the children whose memories involve bombs and fire and fury and guns and bullets and dust and blood and loss and grief. I feel for the emptiness I see blossoming behind their eyes, underneath the pain, the inability to understand why such things can be. I understand the way a child might feel when torn apart from those first precious friendships with one’s peers, from the security and warmth of a family home; when witnessing the carnage of a hot war blowing up around them, destroying everything they have ever believed to be true, like a dragon breathing a plume of flame on their lives and leaving ashes behind.
And I wonder what I can do. What I, and those like me, can do.
Well, what we can do is tell stories.
Not THEIR stories – those are theirs to tell, some day, maybe. But stories like theirs. Stories which will reach out and tell other people about the truth of their lives, through the “lies” of fiction, of fantasy. We can shine a light, we who create art, into the dark places of this world. That is what we are for. That is what we do. What we want to do. What we NEED to do
Back in the land I come from, there is a beloved poet called Aleksa Santic, and a beloved and well known poem entitled, “Ostajte ovdje” – “Stay Here”. Young children of my heritage and culture know these lines – they are engraved on the souls of the humans of my nation. They are these:
Ostajte ovdje – sunce tudjeg neba
Nece vas grijat k’o sto ovo grije.
Gorki su tamo zalogaji hljeba
Gde svoga nema i gde brata nije.
Loosely translated,  with poetic license, they read:
Stay here – the sun of a foreign sky
Will never warm you like this one in your own heaven
Bitter is the bread in that place
Where you you’re among strangers and not amongst your brothers.
We who were born under that sun, understand.
And this book, this collection, this effort to gather the stories and to make sure that they are not forgotten, this is my attempt to help save both the souls and the bodies of those who now need us most.
The vast majority of the money raised by this crowdfunding project will be passed on to several agencies who work with and offer aid to the refugees of our era. They used to be Jewish and Gypsie children running from the German Reich; today, they might be Syrian kids running from the ruins of Aleppo or Yazidi women fleeing enslavement in the darkness of cultural recidivism;
Tomorrow, they might be ourselves.
If you marched in any city in the world where like-minded people gathered together… if you had the courage and the fury to follow your passion by being one of the thousands who streamed to America’s airports after Donald Trump’s heavy-handed blow of the refugee/immigrant travel ban in the last days of January 2017… if you spent your precious time on the phone to your representatives decrying the injustices of the new era… I salute you, and I love you all, very much.
If you could not march or raise your voices in the “No Fear/NoHate” cries at the airport or your voice strangles in your throat if you have to speak on the phone to a stranger… there are always ways to make your stand.
Supporting this crowdfunding effort, throws your support both towards the writers and artists and other publishing professionals who made this happen, and in the days of defunding the arts that also is a statement of defiance, and makes certain that you have been a part in funneling much needed funds to organizations which work directly with the lost and the dispossessed.

If you want to help — as an author, illustrator, someone who cares — write to me HERE

~~~~~
Tea and a good book
My novel, ‘The Secrets of Jin-shei’, was first published more than a decade ago and it made quite a splash at the time. It was published in 13 languages, got rave reviews in many unexpected quarters, and it was a bona fide bestseller in Spain.

I’m sure it is out of print some places, but Germany is no longer one of them. It is being reprinted as I speak.
Just the other day I came across an unusual reference to the book from the Tea Blog, “Official Blog of the English Tea Store.” 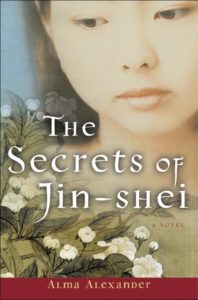 At the English Tea Store you can, or at least you used to be able to, buy “Oolong Orange Blossom Tea. And, learn all about ‘The Secrets of Jin-shei’, illustrated with my favorite of all the covers, the hardcover from the HarperCollins US edition. There was text that read in part:

Oolong is a traditional Chinese tea that is only partly fermented, giving it an in-between character that lacks the bitterness and body of black tea, yet is richer and rounder than a conventional green. English Tea Store’s Oolong Orange Blossom Estate Tea is a particularly satisfying rendition of this Far East treat, with the gentle addition of the essence of orange blossoms…
In The Secrets of Jin-Shei, a novel by Alma Alexander, we are swept into (a) mythical Chinese kingdom , steeped in tradition and culture, that beckons us to pause, and to breathe in deeply. In the novel, we learn of the covert written language jin-ashu, the woman’s tongue, taught for generations from mother to daughter to allow a woman to reveal the dreams and desires deeply held in her heart. It is through these words that sister-bonds are formed….
Be patient in brewing Oolong Orange Blossom Tea, to give it the time it needs to unfurl into the richness of its character. And there’s no need to sweeten; it brings its own honeyed aftertaste. As well, give The Secrets of Jin-Shei time to reveal the depths of its characters and the fulfillment of its own sweet promise.
As tea-and-novel companions, Oolong Orange Blossom Tea and The Secrets of Jin-Shei are a most honorable match.
You can see the original story HERE
or HERE
~~~~~