commons.wikimedia.org(1945).jpg / Creative Commons
Wake was a spy, a journalist, and a hero of the French Resistance during World War II. Would you like your baby to be exceedingly glamorous? Then name her Nancy.
Born in New Zealand, Nancy ended up settling in Paris, where she worked as a journalist and passed her time in the enjoyment of “a good drink” and handsome French men. When WW2 broke out, she joined the Resistance and saved the lives of hundreds of Allied soldiers and downed airmen by escorting them through occupied France to safety in Spain”, and later joined the British Special Operations Executive as a spy.
One time, Nancy got her parachute stuck in a tree. A nearby Frenchman said he wished all trees could bear such “beautiful fruit”, to which Nancy responded, “Don’t give me that French shit.”
Just think, these could be your baby girl’s first words, Hannah Jewell suggests.
Read about all these amazing women HERE
~~~~~
When worlds collide – History, historical fiction and historical fantasy

A couple of years ago, I blogged about ‘The Secrets of Jin-shei,’ a novel I wrote as a historical fantasy. Its roots lie in Imperial China and the secret language of women that then existed, but it is NOT China – I called my world Syai — and it is NOT a straight historical novel. It was never intended to be.
But HarperCollins put on a cover for the American edition which was far more mainstream than fantasy. Despite the earnest protestations in the Author Note in the novel, there were  bookstores that placed the book in the history section – and, inevitably, those readers and reviewers who expected real history were in for a disappointment. A few readers and reviewers have faulted my ‘historical research’, even demanding to know precisely WHICH Chinese Imperial dynasty my book is supposed to reference, as  though the world of my imagination is really the historical China of our world.
It isn’t. It never was. China was an inspiration for the fictional fantastical land of Syai, not its direct historical antecedent.
That all came to mind because of an essay by Disha Jani in The Toast
Who Tells Your Story? Historical Fiction as Resistance
Jani is talking about real historical fiction, set in a real world, not my China-that-never-was. But I found her article fascinating because I too have loved historical fiction.
“What drew me to reading about the past in the first place” Jani writes, “…is fiction in the literal sense. Specifically, children’s historical fiction presented as the diaries of girls my age, living through various periods in Canadian and world history.
“The librarian at my elementary school pointed me towards the one about Marie Antoinette one day, and I was instantly consumed. The Dear Canada and Royal Diaries books meant that I could hunker down with a friend who was escaping to a New York tenement from Russian pogroms, or being shipped to Quebec as a fille du roi, or studying with the imperial Chinese because her tribe needed to establish diplomatic relations.
“Today, I continue to love anything about a badass genius woman in an old-timey world.”
Hmmm. Maybe she should read my “Empress” when it comes out. Except that once again… the ‘historical’ in that book is very much tempered with the ‘fantasy’.
Fair warning. I love history and the depths of its roots but I prefer not to be constrained by the exact “and this is what happened” boxes when I am writing a story – which is why the historical fantasy field is something I am so delighted with. I’ll meet you all in the not-quite-REAL lands of my imagination…
Read the whole Disha Jani article HERE
~~~~~
A ‘Happy Gent’ At 100
Herman Wouk has written an autobiography entitled ‘Sailor and Fiddler, The Reflections of a 100-year-old Author’. The sailor represents his life as a writer, the fiddler his spiritual side. 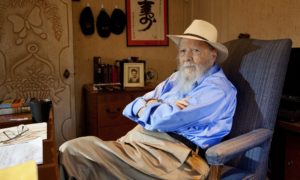 Stephanie Diani/Simon & Schuster
Wouk quickly became a best selling author with such novels as Marjorie Morningstar and the Pulitzer Prize-winning The Caine Mutiny, which was made into a movie starring Humphrey Bogart as the unforgettable Captain Queeg.
Growing up in the Bronx, Wouk wanted to be a writer, but Judaism was always important to him as well. He loved Mark Twain and Alexandre Dumas, and he also fondly remembers listening to his father read the stories of Sholem Aleichem on Friday nights.
Read the whole story HERE
~~~~~
THIS & THAT
At Bustle, Sadie L. Trombetta selected
10 Jane Austen Tattoos For The Classic Lit Lover In You
including this one from ‘Pride and Prejudice’ 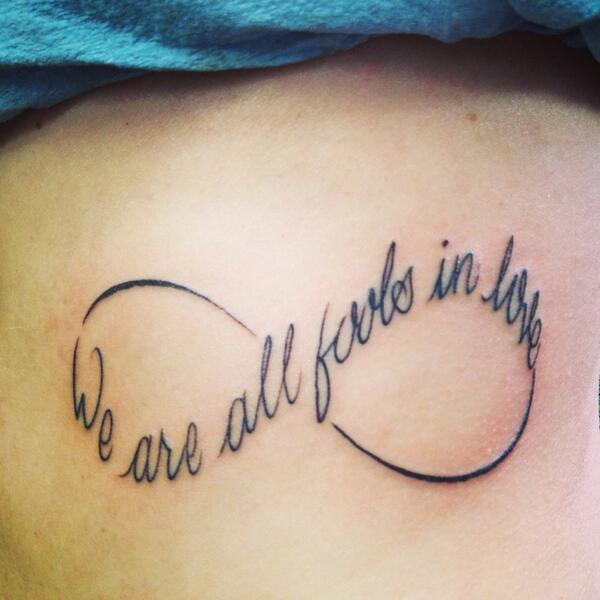 See the other nine HERE
~~~
A bookseller recently emailed me that she had sold out of my books at Rustycon, adding that she had hand delivered a copy of ‘Random’ to a customer in Keizer, Oregon on the way home.
The customer was the member of a book club which was about to discuss the novel and she wanted to get it in time to read it before the meeting.
“Since she’s apparently a night owl,” A. Carpenter (AmyCat.BookUniverse) wrote, “she was fine with me delivering it on my way home. Thus, I ended up delivering a copy of your book in Keizer at 2 am!”
Over and beyond the call of duty.
~~~
“Write what you know means ‘before you write about something, know it.’ As a living human being, you must constantly learn new things anyway, or you are obsolete and will be replaced with a newer model. Make one of the new things you learn what you want to write about.” ~ Jerry Kindall
~~~~~
At Buzzfeed, Alex Alvarez has discovered
31 Funny Tweets That Are Way, Way Too Real For Writers
e.g.
When fantasy writing is contagious: 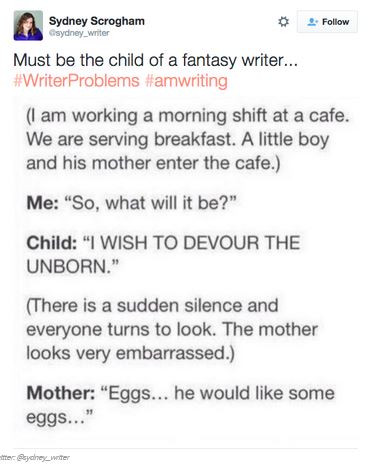 See all the tweets HERE
~~~~~
Quote of the Day
“The difference between an optimist and a pessimist? An optimist laughs to forget, but a pessimist forgets to laugh.” ~ Tom Boddet
~~~~~
Alma Alexander       My books       Email me