They didn’t ask me, but Clickhole asked some other authors:
What’s your most important advice for young writers?
If I had been asked, I would have told beginners:
If you’re lucky enough to have one of your characters upbraid you for doing it wrong in the book you’re writing – listen. Otherwise the little bastards will never let you have a decent night’s sleep again. Your characters will have surprising insights into their own stories, and their own souls. Listen to them.
Jonathan Franzen’s advice to Clickhole was somewhat similar to mine, but my favorite response was from Haruki Murakami.

Haruki Murakami
“Every time you write, ask yourself: Could this scene take place in a hot-air balloon? If the answer is yes, then it probably should.”
Read the whole story HERE
~~~~~
Another thing that beginning writers should know from the start is
The Eight Deadly Words
What are they? It’s when your reader puts down your story and says or thinks:
“I don’t care what happens to these people“.
You create characters to make sure that this doesn’t happen. You try and create characters whose fate will matter to the reader, whose achievements and triumphs they will celebrate, whose failures and catastrophes they will feel like a kick to their guts.
This does NOT mean that those characters have to be perfect – in fact, a damaged creature who is trying hard is infinitely more fascinating than a superhero. The best characters are NOT black or white, but the newly proverbial fiifty shades of gray.
A villain may do something that (s)he absolutely believes to be the right thing to do, — under the justification of taking revenge, or making a necessary point, or because the end justifies the means.
A protagonist driven beyond his or her limits might make an evil choice.
Thus the lines begin to blur between villains and heroes.
But is there a point where some line in the sand is crossed, a line that goes beyond reason, or ethics, or morality, beyond being human.
Everyone makes mistakes – but in the aftermath of the line crossed, I don’t care what happens next because even if the character is rewarded I don’t want to live in that world, and if the character is punished for that horrendous deed, I don’t want to know any details – let them die anonymously and their names forgotten.
Why am I thinking and blogging about it now? Because there’s a lot of chatter about two particular incidents in the TV version of “Game of Thrones”.
Let’s start with Daenerys Targaryen. There are a lot of things to like about that character — she’s her own creature and nobody’s plaything, and of course everything IS better with dragons.
But… really. That business in the arena, with the horde of the masked Sons of the Harpy rising up from the stands. I’ve never seen so many throats cut so fast. Dany clearly needs a new idea here to save the day. And lo, here it comes, the lost dragon who takes this moment to become kissy-face reacquinted with mummy – all while spears are thudding into his back.
So what does Dany do? She climbs on the dragon’s back and flies away, abandoning the small band of people who had been protecting her from the murderous mob.
I like my rulers with a little more honor than this.
And then the biggie. Stannis Baratheon, and Shireen. 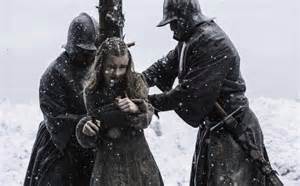 I am told that burning his own daughter at the stake is something Stannis doesn’t do in the books (I’ve read only the first book in G R R Martin’s magnum opus.) I sincerely hope so because then in the books Stannis might still be someone you can actually root for.
As it is, in the TV version I’m actually hoping that Ramsay comes back and finishes the job. Because any man who will burn his child alive – because some “god” wants the sacrifice – will not hesitate to throw YOUR children into the flames if he thinks that is necessary or if they get in his way. And that is DEFINITELY not a man I want in a position of power over me.
So, I Don’t Care What Happens To Stannis, not any more. He is a misreable failure, an unredeemable human being who deserves a long and lingering death.
Dany has a thin lingering chance. It depends entirely on what she does after she gets off that dragon. I don’t know if there is any way at all she can redeem her fleeing the arena of slaughter and leaving friends behind to face their deaths.
Game of Thrones is starting to red line for me.
~~~~~
Reap What You Sew
In 2002, Michael Swaine turned an old-fashioned ice cream cart into a mobile sewing table. Now he can be regularly found in San Francisco’s neediest neighborhood, the ‘Tenderloin’ , perched behind his vintage sewing machine, stitching patches onto worn jacket linings, hemming trousers, repairing tears in ladies’ blouses — all for free. 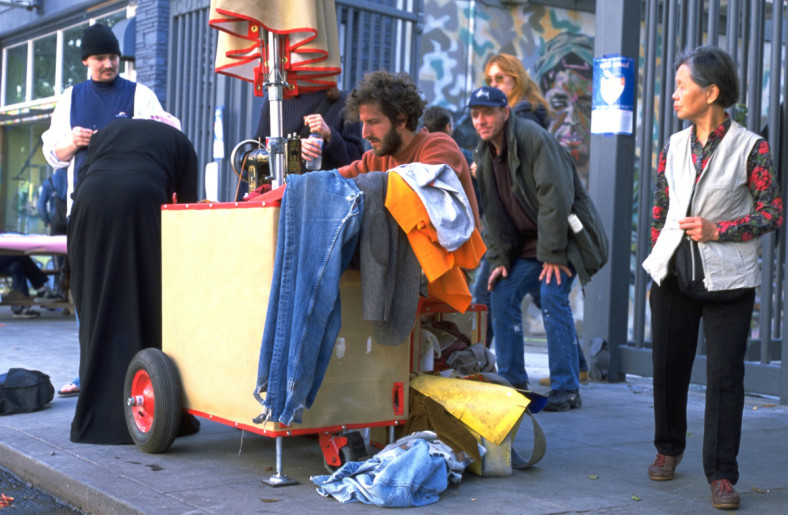 Chronicle/Darry Bush
Swaine, 34, a trained artist, calls it his “Reap What You Sew Generosity Project.”
His mending is not only about the clothes — it is about the community, friendship, conversation. the people in it, and his own needs to find comfort in a world that is so used to throwing things away.
See the story and video HERE
~~~~~
You’ve heard of the doggie in the window… now meet the kitten in the library. 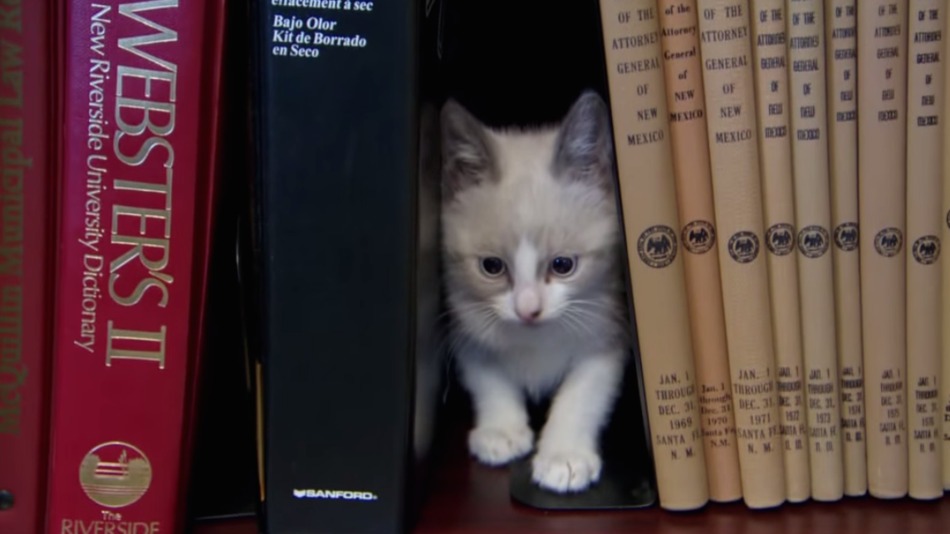 Library encourages office workers to check out kittens
A county office in Las Cruces, New Mexico, is home to one of the most ingenious stress-relief ideas ever: a cat library, where office workers can check kittens in and out like books.
Read the Mashable story HERE
~~~~~~
THIS n THAT

Credit: AP Photo/Geert Vanden Wijngaert
More than 173,000 pots of plants and herbs form a flower carpet in front of the city hall in Antwerp, Belgium to celebrate the 450th anniversary of the Antwerp city hall. Artist Anne-Mie Van Kerckhoven selected 31 different species to create a design of large geometric figures in bright sixties colors.
~~~
How Edgar Allan Poe invented…errr, inspired Scrabble
~~~
The Top 12 Places You’re NOT Allowed To Visit In The World
~~~~~
Quote of the Day
“Remember that the happiest people are not those getting more, but those giving more. ~ H. Jackson Brown, Jr.
~~~~~
Alma Alexander     My books     Email me
If you found this blog post interesting, amusing or helpful, then please use the icons below to share it with other writers, readers or the guy next to you on the subway.