Not any more!
Boys like pirates, science and sports. Girls like princesses, fuzzy animals, and cooking. That’s how it was at Scholastic, a major children’s publishing house, until an 8-year-old girl put an end to it, Kathleen Culliton writes at Bustle.
When Els, a girl in London, spotted “Amazing Things for Boys to Make and Do” in the Scholastic book catalog, she got royally ticked off and started a petition. The rest, as they say, is history.
Read the whole story HERE
~~~~~
Ray Bradbury. lost and found
In 2012, Lisa Potts rediscovered — literally, behind her dresser — a taped cassette of a long-lost interview with author Ray Bradbury that she made as a college student journalist in 1972. The recording was made in a car on the Los Angeles freeways as Potts and fellow student Chadd Coates were taking Bradbury to present a lecture.
PBS Digital Studios Blank on Blank did a delightful animated video of the interview.

Ray Bradbury interview with Chadd Coates
Quote from the interview
On Fantasy: “Sometimes you have intuitive insight about how you think things are going to be, and you write that. Other times you fantasize completely, which has nothing to do with predicting the future.”
Full story and video HERE
~~~~~
Another literary lost and found
150-year-old Mark Twain stories discovered
Scholars at the University of California, Berkeley have uncovered a cache of stories written by Mark Twain when he was a 29-year-old newspaperman in San Francisco, Nicky Woolf reports in The Guardian. 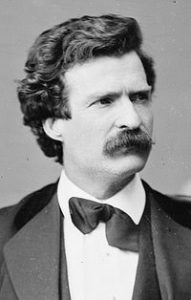 Mark Twain, detail of photo by Mathew Brady, Wikipedia
Twain wrote some of the letters and stories at the San Francisco Chronicle when it was called the San Francisco Dramatic Chronicle, where his job included writing a 2,000-word dispatch every day and sending it off by stagecoach for publication in the Territorial Enterprise newspaper in Virginia City, Nevada.
His topics range from San Francisco police – who at one point attempted, unsuccessfully, to sue Twain for comparing their chief to a dog chasing its tail to impress its mistress – to mining accidents.
Read the whole story HERE
~~~~~
10 Real Alien Worlds That Resemble ‘Star Wars’ Planets 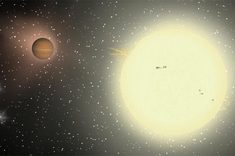 The gas giant planet Bespin appears in “Star Wars Episode V: The Empire Strikes Back,” where it possesses a floating cloud city administered by Lando Calrissian, Tom Chao says at Space.com..
In reality, a class of exoplanets is called “hot Jupiters,” large gas giant planets that circle extremely close to their stars. One in particular, called TrES-4, is a puffy world, meaning it has an extremely low density.
See all the alien worlds HERE
~~~~~
Messenger’s Mercury trip ends with a bang, and silence

The probe, illustrated soaring above Mercury, went into orbit around the planet in March 2011
Nasa’s Messenger mission to Mercury has reached its explosive conclusion, after 10 years in space and four in orbit, Jonathan Webb reports at BBC News. Out of fuel, the spacecraft smashed into a region near Mercury’s north pole.
Read the whole story HERE
~~~~~
THIS ‘n THAT
The Girl Who Started It All
Celebrating 85 Years Of Nancy Drew HERE
~~~
14 Of The Most Buzzed-About Books Of 2015
How many have you already read?
~~~~~
Quote of the day
“If you want to write, if you want to create, you must be the most sublime fool that God ever turned out and sent rambling. You must write every single day of your life. You must read dreadful dumb books and glorious books, and let them wrestle in beautiful fights inside your head, vulgar one moment, brilliant the next. You must lurk in libraries and climb the stacks like ladders to sniff books like perfumes and wear books like hats upon your crazy heads.” ~ Ray Bradbury
~~~~~
Alma Alexander      My books      Email me
If you found this blog post interesting, amusing or helpful, then please use the icons below to share it with other writers, readers or the guy next to you on the subway.