What do women want?

From time immemorial, men have been wondering about, and trying to understand, just what it is that “women want”.
And yet, when they’re told… there’s a chorus of anguish, angst, and angry disapproval. Because it turns out that they don’t want to hear what the women WANT. They want to hear THEIR version of what women want.
Which apparently begins and ends with … THEM.
I’ve read that the thing men fear most is being laughed at by women; and the thing that the women fear most is being killed by a man.
Failing to grasp this – the fundamentality of this – no matter if YOU YOURSELF ARE THE NICEST GUY IN THE WORLD AND IT WOULD NEVER OCCUR TO YOU TO RAISE YOUR HAND TO A WOMAN – is at the bedrock of it all. The #NotAllMen defense.
You want to know what women want? Or at the very least what THIS woman wants? It’s this. It’s being treated with the respect due to another human being, it’s sharing time and space and interaction without the feeling of obligation or entitlement or expecting something in return for the “nice thing” you said.
Treat us like human beings, respect our interests and our wishes and our SELVES, and you’ll get a lot further than you will ever get pointing out what a good ass I have or telling me how lucky I would be if I let you have your wicked way with me.
This rant that I posted on Facebook (if you want to read it all, go HERE) brought to mind an essay I wrote about feminism for Women Writers, Women, Books in June of 2012.
~~~
The Accidental Feminist
“I am not a feminist,” I told my husband, back when we got married.
I knew what I meant. I was not a militant feminist. I was not in the business of teachable moments, of being argumentative about my rights.
But I had absolutely no idea what I was saying.
I am of a generation which simply assumed that women are just – well – equal. I was born into a world where it was simply understood that I was worth as much as the boy next door.
All of my life I have been taken seriously, respected, given opportunities. Given love, given understanding … given political and social equality, at least on the face of it. Nobody ever raised a hand to me.
In my world, women ALWAYS have had the vote, ALWAYS have had reasonable access to birth control, ALWAYS have had access to education, to books, to culture, to being all they could be.
But I learned little things along the way. I learned about the way that women had been picked and trained as astronauts but never got into space. And then I watched women leap into the skies and look down upon our fragile blue planet from orbit. It was a huge step, but you see, it was INEVITABLE to me – because I took that world for granted, the world in which women could do this, could do anything. 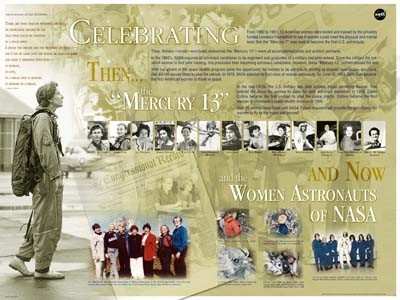 The Famous Mercury 13 (NASA.gov)
And yet it was also the world where those original pioneers had the guts and the heart and the raw courage to put themselves forward as astronauts in an era where that was still not acceptable. The Mercury 13, as they became known, are finally celebrated today as heroines. And NASA produced a commemorative poster to honor them.  It was one of the proudest moments of my own life when NASA requested permission to use a fragment of one of my poems on that poster.
That was a piece of the puzzle.
I write books which have women as protagonists – strong women who have lives, opinions, who do hard things without running to the nearest man for help. I am proud of that. One of my books was once described as “feminist fantasy” and I’m rather proud of that label.
THAT’s another piece of the puzzle.
I grew up in an era where a woman walking up to the polls is as commonplace as seeing a daffodil bloom in springtime. But it was not always thus.
I keep on remembering the movie “Iron Jawed Angels” which detailed some of the sufferings that early suffragettes went through – for our sakes, for the sakes of their descendants, of posterity. A senator’s wife, locked up in a prison for her principled stance, is told in the movie by her husband about her daughters, “The girls miss you“.   Her face kind of crumples and then kind of glows, and she whispers, broken but proud, “It is for THEIR sake that I am here…”
She was there for my sake, too.
Last year I was inaugurated into the YWCA Pacific Northwest Women’s Hall of Fame – and a woman who attended the reception did so in the costume of a suffragette. I asked if I could have the privilege of having a photo taken with her – a photo that showed my allegiance, across all these years, to the movement, and the cause, and the courage, and the dream of these women who dared to dream that dream so that I would simply take it as my birthright.
It is so easy to forget that the 19th Amendment to the American Constitution was enacted only in 1920. In one of the most ‘progressive’ nations in the history of the world, the women have had the vote for less than a hundred years.
We haven’t had the choice to cut our hair, or wear trousers, or marry whom we choose, or own property, or have a college degree and be professionals like doctors and lawyers and lawmakers, for that long.
THAT was another piece of the puzzle.
I am a woman, a woman born in the mid-20th century, living in the 21st, and I believed that I understood my world.
But that is not the case.
The battles have to be fought again, and again, and again.
Speak your mind or assert the rights that your grandmothers have won for you, and you are called a slut, or worse. Men decide when or how you are allowed to have your children, or not. Men decide whether or not you’ve actually been raped or not, or whether you were ‘asking’ for it because you wore a skirt that ended at the knee.
Why is it that a man gets the final say on whether or not a given woman’s body is forced to gestate a clump of cells WHICH IS NOT, REPEAT NOT, YET A BABY, no more than a mitochondrion or a liver cell is? Why is it that a man gets to tell me anything at all about myself, and feels as though he has that right by virtue of the fact that he is a man and I… am not?
I told my husband, once, that I was not a feminist. But the older I get, the more I wake up to the fact that I am, I have always been, I always will be one.
And his response to this? A slow smile and a nod, and “I knew that all the time.”
I seem to be the quintessential Accidental Feminist, a woman who never bothered to question the fact that I could ever live a life in which my rights were not a given.
I find myself thinking about the deep debts I owe to the suffragette generation. To the women who stand up for our rights even today, and get vilified for it. How much I, as a woman, owe to those sisters who are still property, and who are still not in a position to write or even think the words that I am putting down here.
And so, finally, I believe.
And it looks like the people who love me have always known me a little better than I knew myself.
—
~~~~~
Quote of the day 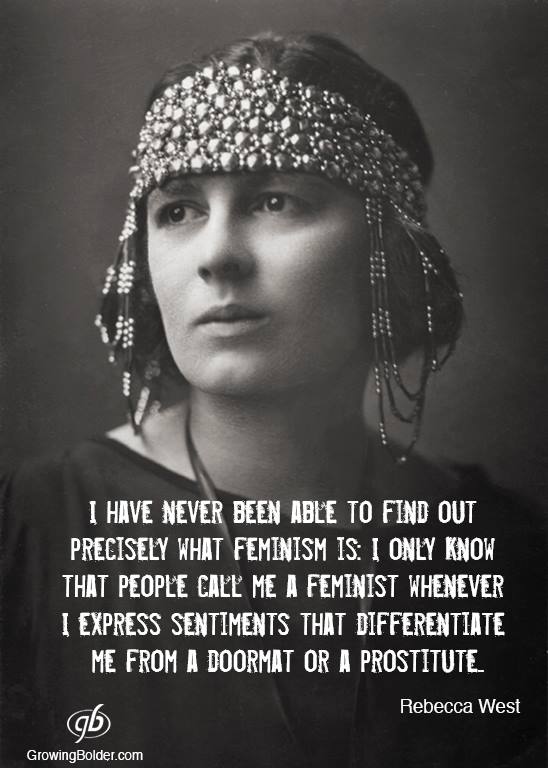 ~~~~~
Alma Alexander       My books       Email me
If you found this blog post interesting, amusing or helpful, then please use the icons below to share it with other writers, readers or the guy next to you on the subway.