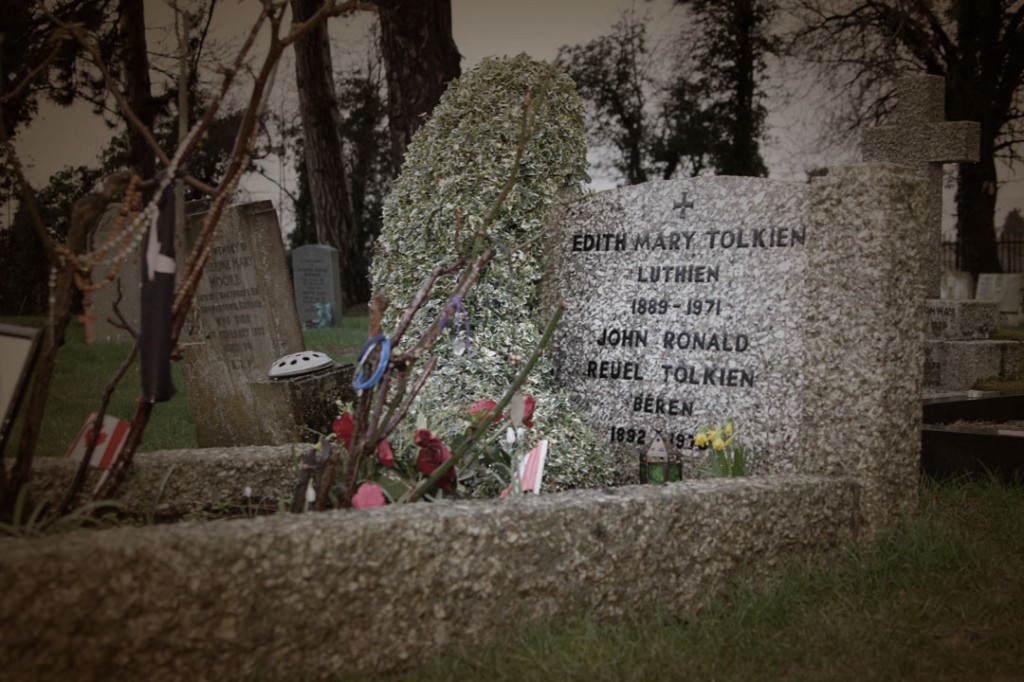 Many years ago, I went to visit the grave of J. R. R. Tolkien in Wolvercote Cemetery in Oxford. It took some finding in amogst the sea of Polish dead in the Catholic part of the cemetery, but I did find it and stood before the gravestone of the man who gave us the greatest fantasy of all time, and his wife.It had just their names and the dates and then, underneath each name, one word. “Beren”, under his, “Luthien”, under hers.His great immortal love story – or mortal love story, if you want to see it that way – Luthien the Elven Princess who gave up her immortality to be with her love, the mortal Beren, so that they both could die – because she did not want to live forever without him.
Just those names. And a whole love story – in real life – is told. Without another word.
I stood by the gravestone in silence for a moment because I could think of nothing to think except “thank you”. And in the stillness of the air between the graves a touch of a a breeze stirred the leaves on the trees, the lightest of touches on my hair, the faintest of whispers, as though the Professor was saying, “You’re welcome…”
At Flavorwire, Emily Temple has selected 15 other epitaphs of famous authors — from the tongue-in-cheek to the ponderously serious, from the knightly to the poetic, and even one that doubles as a grave robber’s curse. 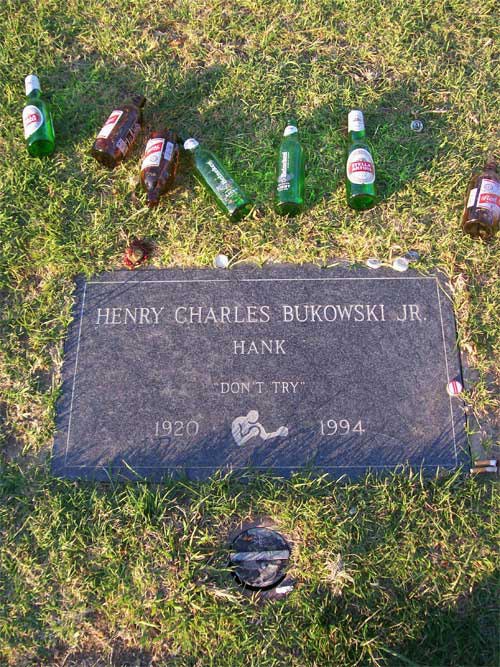 [Image via]
“Don’t try.”  Not as depressing as it seems:Charles Bukowski explained the phrase in a 1963 letter: “Somebody … asked me: ‘What do you do? How do you write, create?’ You don’t, I told them. You don’t try. That’s very important: ‘not’ to try, either for Cadillacs, creation or immortality. You wait, and if nothing happens, you wait some more. It’s like a bug high on the wall. You wait for it to come to you. When it gets close enough you reach out, slap out and kill it. Or if you like its looks you make a pet out of it.”
Read the article
~~~~~
11 Great New York Moments From Books
New York City is unlike any other place in the world. Love it or hate it (or both, as the case may be), the people, places, and even smells are totally one of a kind, Leah Butterfield writes in Bustle.
The books on this list were written at various times throughout the city’s history, but they all contain those quintessential, only-in-NYC moments that make New Yorkers feel all mushy and sentimental. 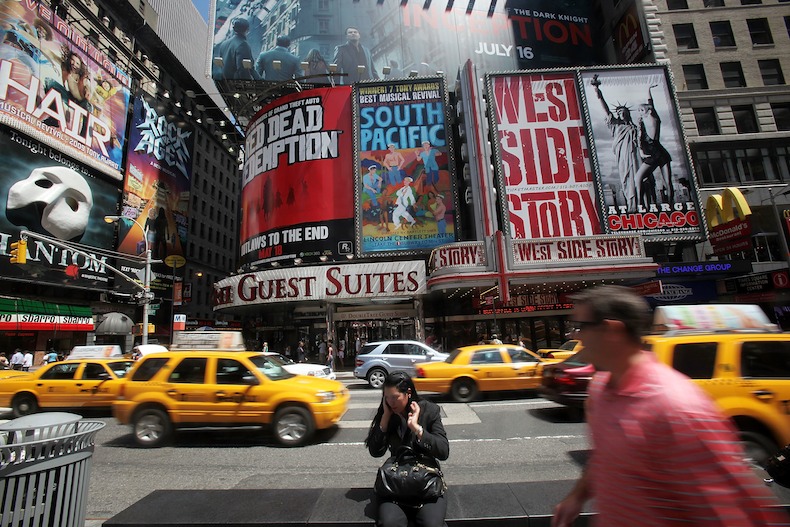 E.B. White ponders the three types of New York in Here is New York: The entirety of this short book is devoted to New York City as E.B. White experienced it in the summer of 1948. Many of his ruminations still ring true, like his claim that there are “roughly three New Yorks”: New York for the born-and-raised folks, the commuter’s New York, and New York for those who were born elsewhere and came to the city “in quest of something.” White found the third one to be the most important, crediting the spirit and passion of outsiders with the city’s major achievements and productivity.
Read the article
~~~~~
10 Lessons from Real-Life Revolutions that Fictional Dystopias Ignore
Dystopias are glorified just as much as utopias are, and they are just as unlikely to be monolithic. The world is built of alternating bricks that consists of both. And the truth is, uncomfortable though that may be, that every single thing can be seen as one or the other. It depends on your point of view.
In io9, Esther Inglis-Arkell offers 10 lessons from real-life rebellions against repressive regimes that she wishes the creators of fictional dystopias would pay attention to.
Take #7 for example:
Two Downtrodden Groups Will Usually Be Fighting Each Other 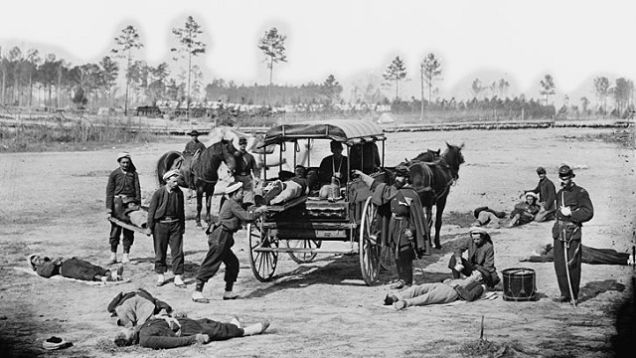 In the American Civil War, both the Union and the Confederacy had conscription but exceptions to both were contingent upon wealth. Those on the Union side could pay to keep from joining the army. Confederate men were excused as long as they owned a certain number of slaves. Wealth was, then as now, tied to political power, meaning that the wealthy people had steered the course to war in the first place.  As the saying at the time goes, the Civil War was “a rich man’s war but a poor man’s fight.”
Read the article
~~~~~
THIS ‘n THAT
Whereabouts? Each of us has acquired a new line in our celestial address, Michael Quinion writes in his delightful newsletter World Wide Words.
As every school kid knows, our address is:
Name, Street, City, Country, Earth, The Solar System, Milky Way, Universe
Now insert between Milky Way and Universe  – Laniakea.
Brent Tully and his colleagues at the University of Hawaii have given this name to the supercluster of about 100,000 galaxies to which our own galaxy, the Milky Way, belongs. The team took the name from the Hawaiian words lani, heaven, and akea, spacious or immeasurable.”
Read the newsletter
~~~~~
Smells take us back in time
The smell of new unsharpened pencils takes me back to my grandfather’s desk, where he kept a box of them in a drawer. He was a teacher for four decades and more and a writer for longer than that. Pencils were a part of all that he was – that smell of virgin lead, full of promise and of future memories as yet unborn. The pencil before it was thrust into the sharpener and formed into a point that could make marks on paper. The smell… of POTENTIAL.
I keep a box of my grandfather’s unsharpened pencils on my own desk.
I remember the smell of a particular kind of glue. Not every kind, but the kind that came in plastic pots which had a plastic “pocket” on the inside where a tiny plastic spatula lived which you used to scrape up the glue from the pot and shovel it onto crepe paper and put together the kind of sloppy messy joyful senseless projects we did in kindergarten. That glue, and crepe paper. Particularly red crinkly crepe paper. Two distinct smells – and I’m five again, messing about in a room with child-sized benches and blunt scissors and the laughter of small children.
Lilacs. And hyacinths. And my grandmother walks beside me once again.
The first tickle of frost in the air that tells you that summer is really over, fall is here and winter is coming.
And horrible smells. The smell of tar, which makes my throat close up at the back and my breath choke in my throat. The slightly sweet rotten smell of a long-term sickroom. That bile-inducing moment when you’re cleaning up your cat’s little present before someone else steps in it and the smell reminds you of what it feels  like to feel nauseous.
The path to our thoughts and our memories so often leads straight through our noses.. 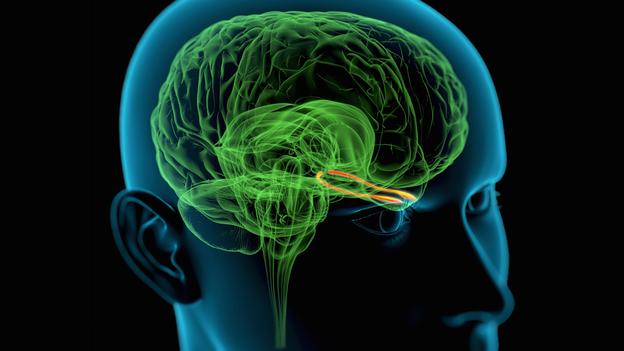 (Copyright: Science Photo Library)
Smell is the oldest sense, having its origins in the rudimentary senses for chemicals in air and water – senses that even bacteria have, Tom Stafford says at the BBC. Before sight or hearing, before even touch, creatures evolved to respond to chemicals around them.
Read the article
~~~~~
Quote of the Day
“Never laugh at live dragons.” ~  J.R.R. Tolkien
~~~~~
Alma Alexander
My books
If you found this blog post interesting, amusing or helpful, then please use the icons below to share it with other writers, readers or the guy next to you on the subway.