Tell me a story

Even in our digital age, live storytelling has a spellbinding effect, Richard Hamilton says in Daily Good.
Hamilton, a radio broadcaster, wonders whether radio or any recording device can ever fully replicate the experience of listening to a live storyteller. 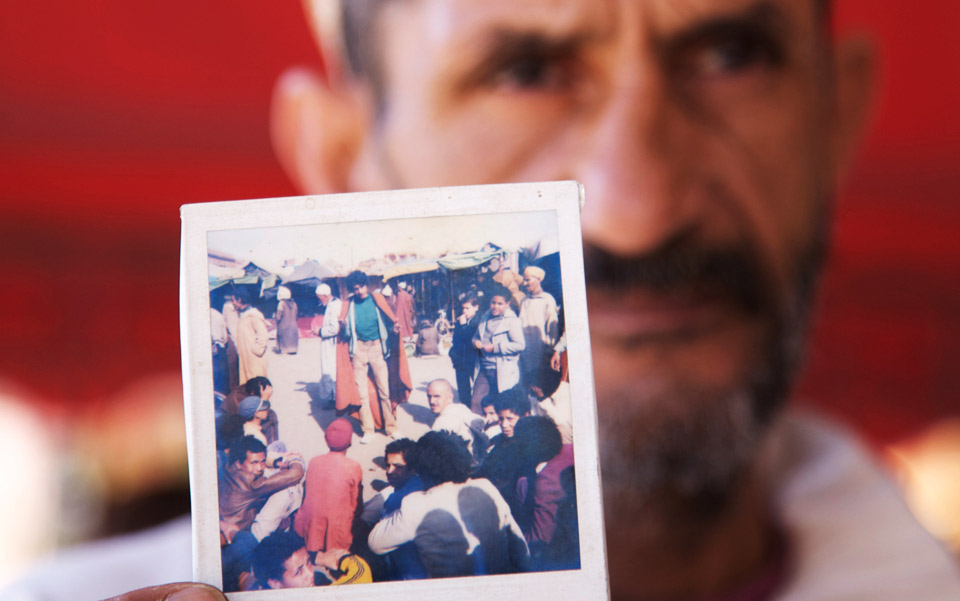 Storyteller Abderrahim El Makkouri holds a photo of himself performing in the 1970s. Courtesy of the author
The folklorist Joseph Bruchac thinks not. ‘The presence of teller and audience, and the immediacy of the moment, are not fully captured by any form of technology,’ he once wrote in  The Guardian. ‘Unlike the insect frozen in amber, a told story is alive… The story breathes with the teller’s breath.’
Hamilton says his research into oral storytelling suggests that Bruchac may be right.
“I wrote a book about the storytellers of Morocco, collecting more than 30 tales in the process. When I read some of them aloud to one of my friend’s children, these stories came alive in a way that I had not expected. The gurgles and shrieks of delight from the bunk beds encouraged me to put more into the performance. It was like the relationship between an actor and his audience, each emboldening the other in a virtuous circle.”
Narrative seems to occupy a very central position in our thought patterns. Our brains seem wired to try to seek out a narrative. It is how we make sense of the world.
Living stories
~~~~~
When the magic is free
Weight of Worlds, my collection of 11 tales of magic, cruelty, and sacrifice, will be free in ebook form until Feb. 5.

But, for the moment, only on the Kindle, I’m afraid.
The cover story tells of several worlds and their millions of souls lost in a game of chance; in other stories we encounter the soul of a sinner locked in a gargoyle serving out his time in purgatory, an angel offering a new life to a deeply troubled woman but at a bitter price, and many others.
All of my stories owe a debt to the dark and twisted fairy tales of Oscar Wilde and the passion and poignant drama of the stories of Hans Christian Andersen.
If you pick up the book, please consider writing a quick review on Amazon.
Weight of Worlds
~~~~~

Illustration by Tom Gauld
Our Young-Adult Dystopia – Is youth best served by age?
“I sometimes wonder what Dante or Milton or any of those guys would make of the modern appetite for the young-adult epic,” Michelle Dean muses in the New York Times.
It wasn’t always a lucrative thing, writing grand, sweeping, fantastical stories, you know. It was a job for nose-to-the-grindstone, writing-for-the-ages types, and worldly rewards were low. Milton died in penury, blind and obscure; Dante met his maker in literal exile.
Today, Dean says, writing a big, imaginative epic, and particularly one aimed at children or young adults, will get you plenty of money and status. However she notes the publishers focus on young writers and points out that could be a problem.
Children’s literature toys with our chronological expectations because the best of it has always been written, actually, by the comparatively elderly. Lewis himself was 51 when the “Narnia” books came out; Lois Lowry was 56 when “The Giver” was published; Madeleine L’Engle wrote “A Wrinkle in Time” in her 40s, and L. Frank Baum his “Oz” books in the same decade of his life.
Age is what the greats have in common. The long years between adolescence and middle age seem to be necessary soil for this craft. It requires roots, and no quick shoots will do. They need years to grow and tangle and set before the brilliant, unforgettable book appears.
Our Young-Adult Dystopia
~~~~~
Quote of the Day
“The price of anything is the amount of life you exchange for it.” ~ Henry David Thoreau
~~~~~
Alma Alexander
Check out my books
Email me
What do you think? Comments welcome.
—–