This was part of the inspiration for the mountain temple in my “Embers of Heaven”, so in one sense, I’ve been here before… 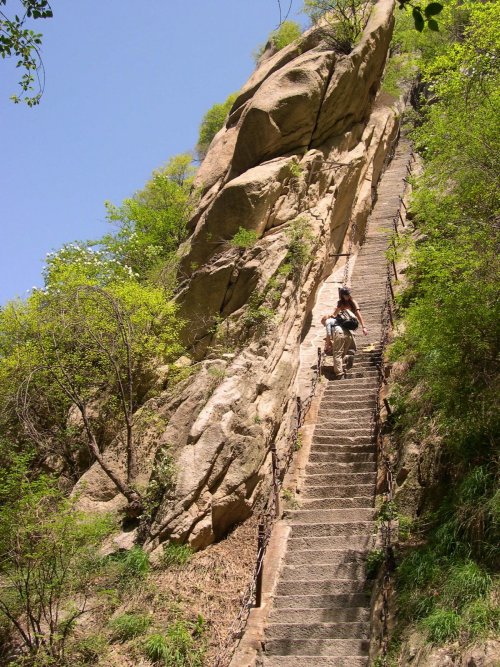 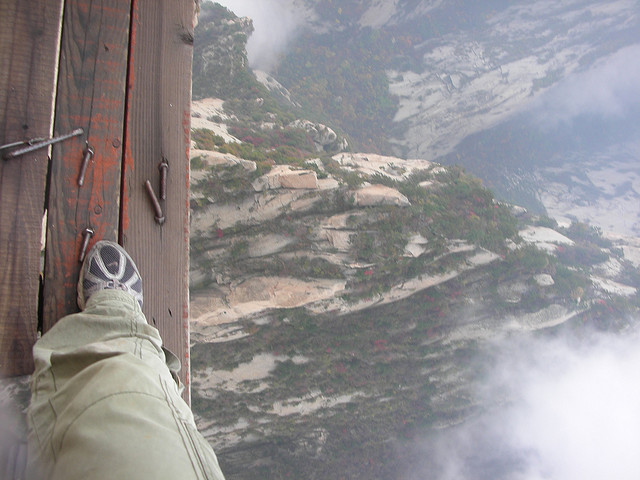 imgur.com
At the base of a mountain in China called Mt. Hua Shan you’ll find a gigantic set of stone stairs, Viral Nova vividly shows us. They are called “The Heavenly Stairs” and go so high up the mountainside, it’s hard to see where they end.
If that wasn’t enough, the precarious stairs lead to the world’s most dangerous trail, the Hua Shan plank path. The plank trail leads high up the Hua Shan mountain just outside the city Xi’an. No one will force you to wear safety gear, although it’s strongly encouraged
And all this to get to…a tea house?
Don’t look down
~~~~~
Steve Karlin and Susie Bear
There are those among us who cannot exist unless they believe humans are the pinnacle of God’s achievement, that everything else is inferior. People who insist that animals are SO inferior that they don’t even have souls.
Their certitude is sad and crippling. I’ve known animals who knew exactly what to do when it needed to be done. I’ve known animals who were braver and more loyal than any human ever made.
I’ve held dying animal friends and looked them in the eyes as they were dimming and I know – I KNOW – that there was a soul there and the soul was saying goodbye.
I never met Susie Bear but I know her, too. I have known animals like her and I cried reading her story. Tell me this is not a soul speaking.
Anne Veh tells us at Daily Good the story of Steve Karlin, founder of Wildlife Associates, and one of the most important animal companions in his life, Susie Bear, a 330-pound American black bear.
He says simply that Susie Bear was his most powerful teacher and a beloved friend. One of the most extraordinary stories about Susie Bear began many years ago at an elementary school in the East Bay of the San Francisco Bay Area.
The story of Susie Bear
~~~~~
Sherlock Holmes, everything you need to know – infographic from The Guardian. 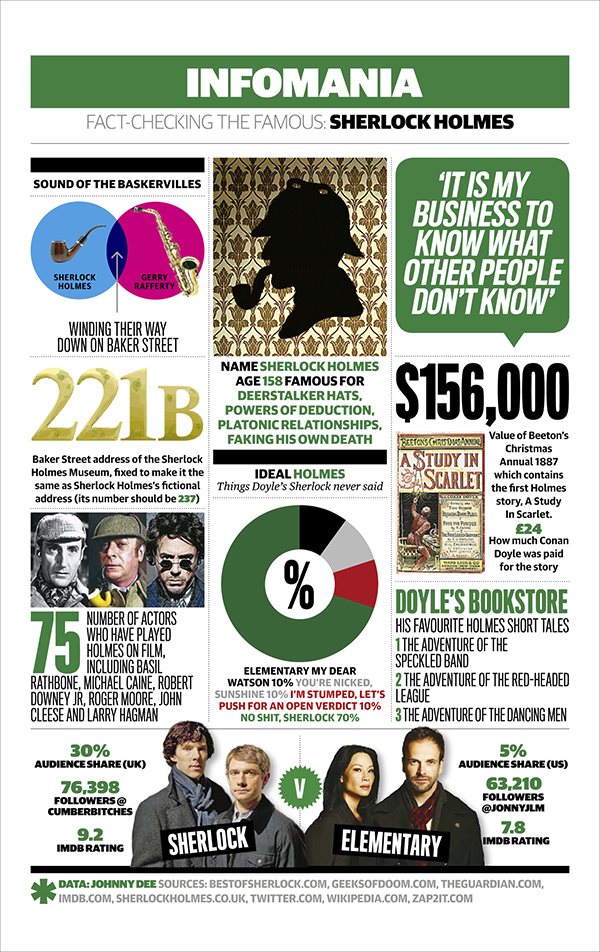 Sherlock
~~~~~
Read to Win the War: Posters Promoting American Libraries
It’s fascinating to take a look through the University of Illinois at Urbana-Champaign’s collection of posters and propaganda, Jordan Kushins writes on Gizmodo.
Lots of the images on file are from efforts to increase book donations from civilians during WWI, then later from the Victory Book Campaign during WWII. 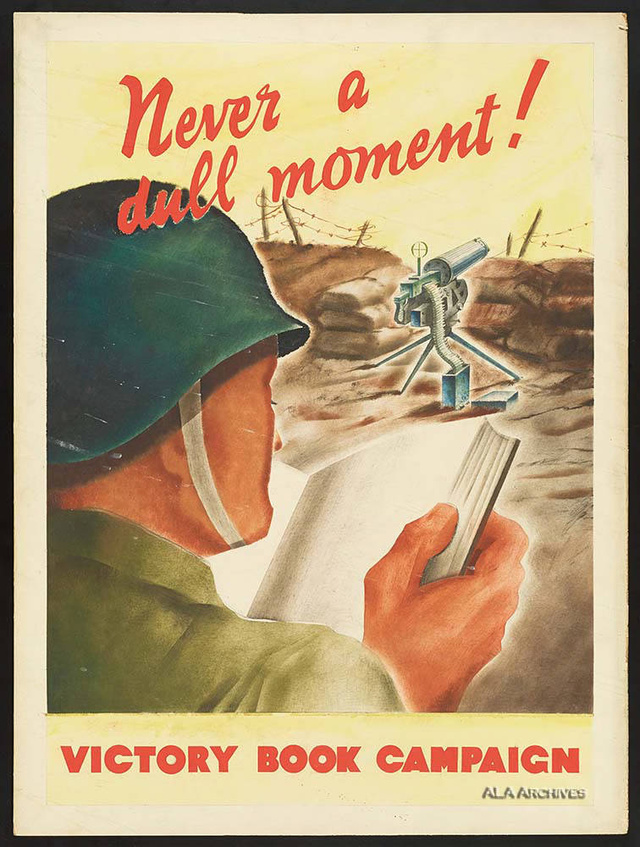 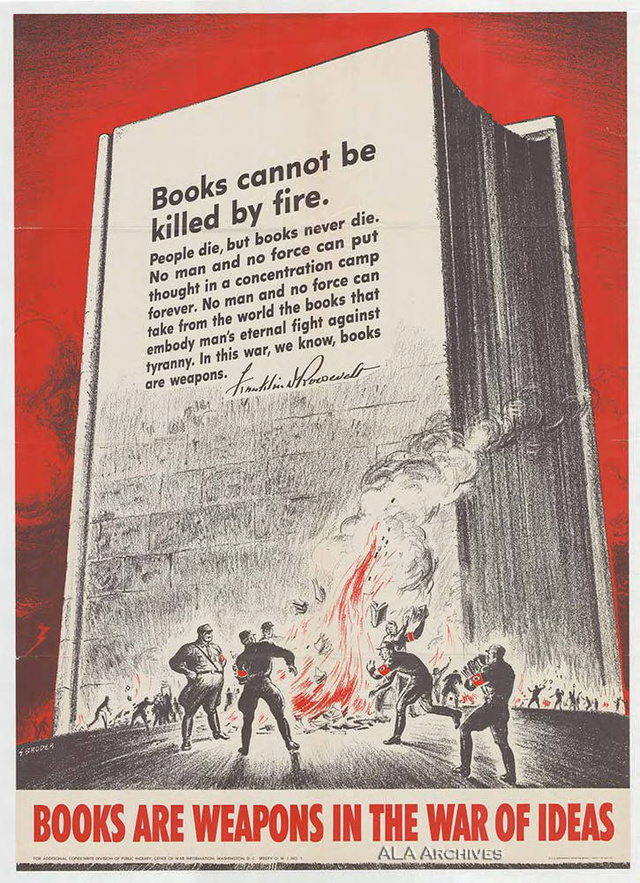 Library posters
~~~~~
Authors’ Self Portraits
At Brain Pickings, Maria Popova writes about the Divide Between the Private Person and the Writerly Persona.
“Only the crazed and the privileged permit themselves the luxury of disintegration into more than one self,” Jorge Luis Borges wrote in an essay ‘Borges and I.’
“It is to my other self, to Borges, that things happen… I live, I agree to go on living, so that Borges may fashion his literature,” he said in the essay that eloquently explores our shared human tendency to disintegrate into multiple personas as our public and private selves slip in and out of different worlds.
In 1996, Daniel Halpern asked 56 of our era’s most celebrated writers to reflect on Borges’s memorable meditation and contribute their own thoughts on the relationship between the person writing and the fictional persona of the writer. Some excerpts: 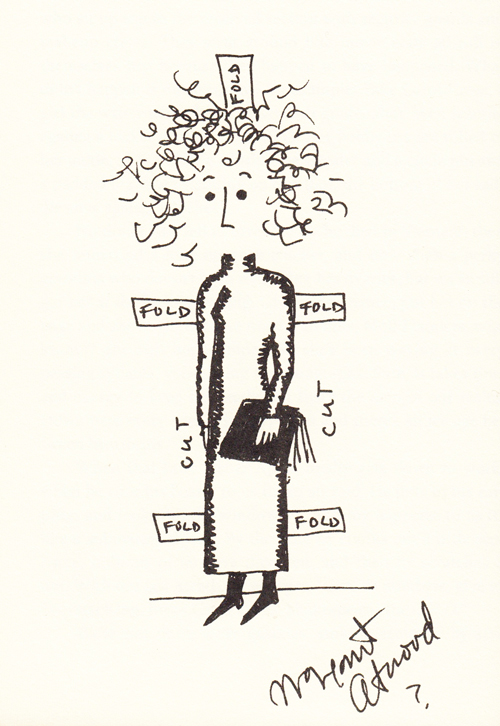 In an essay titled ‘Me, She, and It,’ Margaret Atwood — a woman of strong opinions about the problems of literature and its how-to’s — pokes at the common, flawed trope of the writerly persona as a separate, superior entity to the writer’s person:
Why do authors wish to pretend they don’t exist? It’s a way of skinning out, of avoiding truth and consequences. They’d like to deny the crime, although their fingerprints are allover the martini glasses, not to mention the hacksaw blade and the victim’s neck. Amnesia, they plead. Epilepsy. Sugar overdose. Demonic possession. How convenient to have an authorial twin, living in your body, looking out through your eyes, pushing pen down on paper or key down on keyboard, while you do what? File your nails?
Noting her own embodiment of this dichotomy, she admonishes:
“A projection, a mass hallucination, a neurological disorder — call her what you will, but don’t confuse her with me.”
Authors other selves
~~~~~
From the sublime to the ridiculous. At Flavor Wire, Emily Temple gives us
Extremely Silly Photos of Extremely Serious Writers
For example 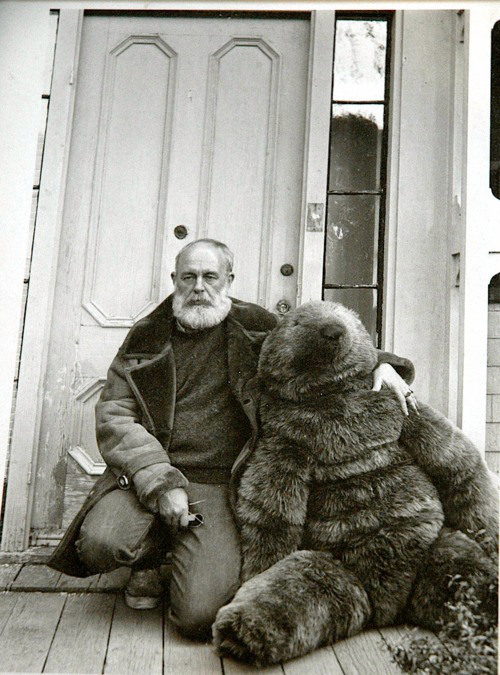 Edward Gorey and his gigantic teddy bear. Image via
Silly writers
~~~~~
Quote of the Day
“Selves will accumulate when one isn’t looking, and they don’t always act wisely or well.” ~ Poet Diane Ackerman
~~~~~
Alma Alexander
Check out my books
Email me