Most Haunting Place on Earth?

The nster website recently posted photos of the “Most Terrifying Places on Earth.” Number 2 on their list was Culloden Moor, Scotland. It could be my number one, although I found it haunting, not terrifying. 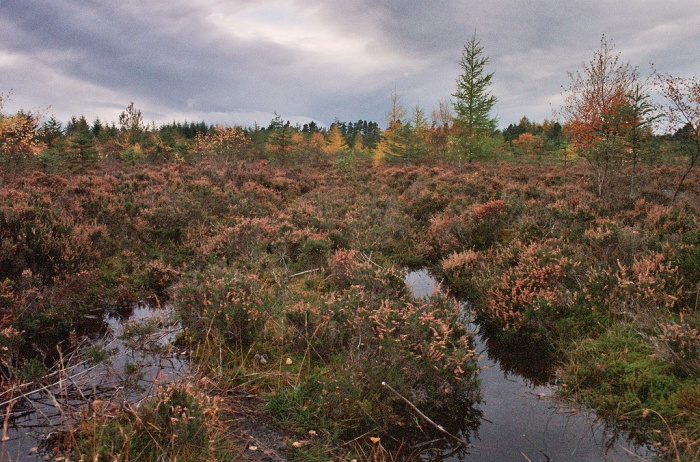 Culloden Moor is the site of the last battle fought on British soil between government forces and Jacobites loyal to Bonnie Prince Charlie. The site is reputedly haunted by those who died during the bloody slaughter.

A couple of years ago I posted the following on another of my blogs about my trip to Culloden sometime in the 80s.
~~~~~~~~~~
Veil Between Worlds: On the Battlefield:
I don’t generally enjoy those “let’s-all-go-in-a-clump” group excursions to anywhere. I tend to be a private person who doesn’t do well with enforced gregariousness.
But I had an opportunity to go to Scotland, a place I’d always wanted to visit, and I found myself sitting on a tour bus trundling through the Highlands, together with a bunch of loud American tourists who wore awful clothes and had obnoxious children called things like Chuck and Mary Lou with whom communications always seemed to be at full volume.
One of the spots the bus stopped to disgorge us was Culloden.
If you know anything about your Scottish history at all, this name will ring a dolorous bell. It was the site of a battle between the Highlanders and the British army – no, hardly a battle, make it a slaughter. There were so many dead bodies strewn on the field that there was no way that they could all be buried individually – so they were sorted according to Clan, by the tartan that they wore, and buried in mass graves over which a stone was raised with their clan name on it.
The visitors’ center was a low modern building crafted for utility rather than beauty or atmosphere. It had an audio-visual theatre inside where you could take in a presentation about the place and its history, a display area with gory woodcuts depicting death and destruction beside data cards detailing times and dates and the course of the battle as it unfolded, and, yes, the inevitable souvenir shop at the exit, selling trinkets to remember Culloden by.
None of these things held any interest for me, really. What I was drawn to was the edge of the parking lot. It was divided from an open field by a low wooden barrier, a single bar at maybe shin- or knee-height which marked the border between the crass and the modern and the workaday and that which lay beyond, that field, so innocent, so green… and all that it meant.
I walked across the parking lot with gravel crunching at my feet and distant birdsong somewhere above me in the blue sky. A gap in the fence marked the beginning of a path across the field, over to a hillock where I could see the grave markers standing. I came to the fence. I crossed the gap, and took a step into the field.
The light changed. The birdsong vanished. All I could hear was whispers, whispers, whispers – all around me – and beyond them all was silence. I moved through that strange flat yellow light to a hillock where a rock stood, surrounded by granite headstones carved with fading names. Clan Cameron. Clan Macdonald. Clan MacGregor.
I stood there, in the silence, in the whispers, in the presence of ghosts, and wept.
I honestly don’t remember how I got out of the field, and back to the bus. Maybe it was the ghosts from beyond the Veil, who took me by the elbow and guided me back from the edge of the Blessed Realm whispering all the while, “Go back. Go back. It is not yet your time.”
I wonder, sometimes, if that much death weighs heavily enough on the Veil to make it porous, to make it eaier to reach through and touch and sense and hear and understand.
Culloden remains the only battlefield of its level of historical fame and repute that I have ever been near; I do wonder sometimes if I would have the same experience if I walked on the fields of Gettysburg, or the ground where they filled in the once-trenches of the Somme and of Passchendaele.
There is something in me that is deeply afraid of finding that out.
~~~~~~~~
The other”Terrifying Places” on the nster website.
—–
Quote of the Day
“People must learn to hate, and if they can learn to hate, they can be taught to love, for love comes more naturally to the human heart than its opposite.” –Nelson Mandela
—–
Alma Alexander
Check out my books
Email me
—–