Is Tolstoy really 11.6% better than Shakespeare?

In an article at Brain Pickings, Maria Popova explains how 125 of modernity’s greatest British and American writers were asked to list ‘The Greatest Books of All Time.’
Well, actually, they were asked to provide a list, ranked in order, of what they consider the ten greatest works of fiction of all time -– novels, story collections, plays, or poems.
Scoring was done by a system best left to those who aren’t as math challenged as I am. But go take a look at the rather fascinating results.
The Greatest Fiction
—–
Where’s Alma?
Or, an author by any other name…
If you go to my old website (HERE) and scroll down to my book covers of the various editions of “The Secrets of Jin-shei,” you’ll find an interesting aberration. Which of my books was written by Alma Hromic? And just who is she?
As you guessed, Alma Alexander is a pen name, one that my publisher, HarperCollins at the time, insisted on because they thought my birth name was just too hard to pronounce.
That’s not a problem for every author it seems, Just how do you pronounce Thomas Pynchon, anyhow — PIN-chawn, PIN-shin, PIN-chin? Whatever.
Anyway, the Dutch publisher who used my real name, the one I was born with, is also the only one who used my original title for Jin-shei. Just that, no ‘The Secrets of…’
By the time the sequel, Embers of Heaven, came along, they joined the herd and published it under Alma Alexander.
Alma Alexander Hromic Deckert
—–
America’s Best Small Towns
Which one would you choose?
Best towns
—–
The new literary chic
People are wearing their books for that quasi-intellectual look, Wathira Ngangawrites in the Daily News, and clothing companies have been rolling out new literary-inspired products for the well-read masses. 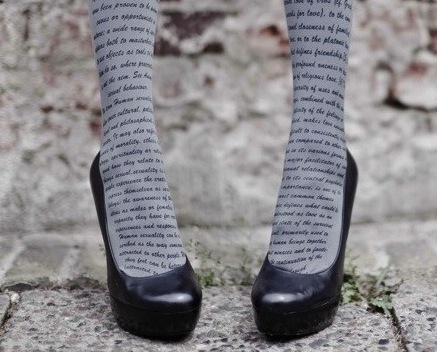 This stylish pair of tights is available from Zohara, an Israeli company
Wearing your books
—–
Definition of a writer:
writ·er  (noun): A person engaged in writing books, articles, stories, etc., especially as an occupation or profession; an author or journalist.
A person who commits his or her thoughts, ideas, etc.writing. A person who writes or is able to write. Shiftess, a dreamer, a liar on paper.
Financially challenged. See degenerate.
— Author unknown
—–
— Alma Alexander
—–
Sign up for my newsletter, Tea with the Duchess, here
Email me:
—–