Worldbuilding ‘The Were Chronicles’, Book by Book

‘Random’ the first book in ‘The Were Chronicles’ triptych of novels, literally started as a short story aimed at an anthology which wanted to deal with “Were” things which were not your generic boring Werewolf – everyone knew about those – how about something different?
So I did something that is fairly rare, out there. I came up with a New Idea.
Now you have to realize that common wisdom has it that there is no such thing as a “new” idea. Every idea, every tale that can be told, has been told already. There are various schools of thought that can distil absolutely everything ever written into The Three, or The Seven, or The Twelve depending on whom you’re talking to. Basic plots and everything depends on what you actually do with those basic ideas.
So yes, Werewolves have been around for… a long time. There are stories about them that only exist on pages hundreds of years old and too fragile for human hands to even touch – or even as no more than oral tales, told by one storyteller to another, the way they were first told around campfires when Neanderthals walked the earth. There are even stories to be found about other Were-critters, as such, if you looked for them although for some reason they aren’t all that common.
But what I came up with – and I honestly don’t think anyone else ever has – is the idea of the RANDOM Were.
In ‘Random’, the first Chronicles novel, I introduce this concept – a Random Were is a Werecreature that may have a basal form – one set at the creature’s first Turn – but Randoms have a wicked twist to this because even with that basal form imprinted, if they are caught out at the wrong place and the wrong time just at the start of a Turn, they will turn into the last warm-blooded creature they see.
You can imagine this can cause quite the drama. My protagonist’s mother… is a Were-chicken… because of an unfortunate farmyard incident when she was very young – her first Turn came early and unlooked for and the last thing she saw was that chicken and not only is she now tied to that as a basic form (she will Turn into that chicken at her time of Turning, barring any other eventuality) but she married a fellow Random who happens to be Were Cat and you can extrapolate from that. What happens if she Turns first and he Turns after? Does the loving husband –as a cat – consider his spouse legitimate lunch…?
I pushed that boat out as far as I could with Jazz, my protagonist, because that is precisely what happens to her – this unfortunate happenstance where she is wrong-timed, wrong-placed at her first Turn, and she changes into something unlooked for, unexpected, and what was thought impossible. This puts a spanner into many works. 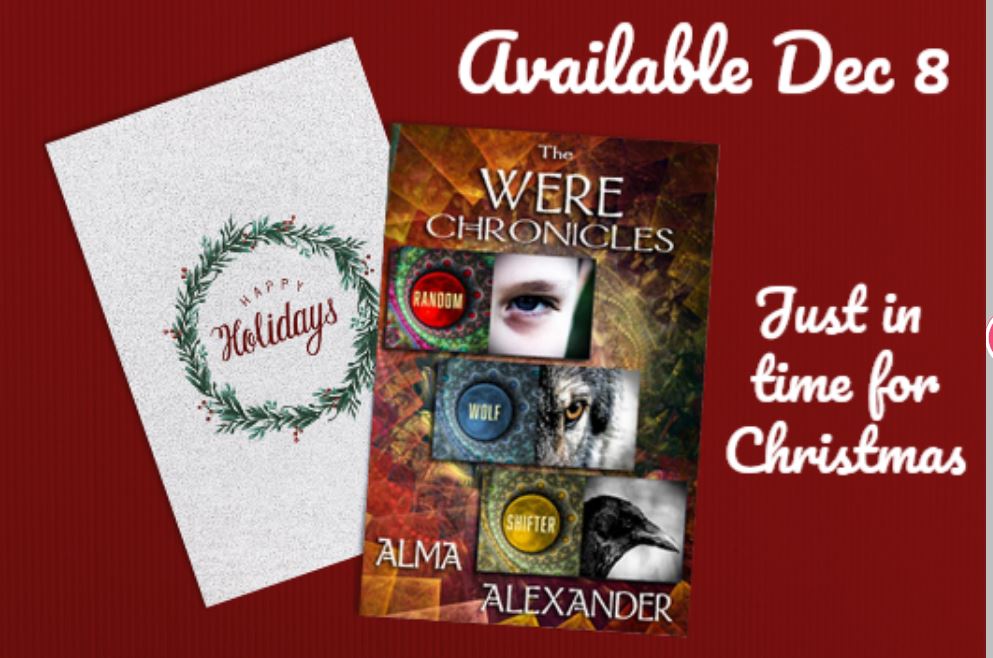 Now the three novels are coming out in a brand-new Omnibus Edition of ‘The Were Chronicles’ just in time for Christmas. Stay tuned for more information. For the moment, check out my Were page HERE
—–