Dancing with my father again one summer night 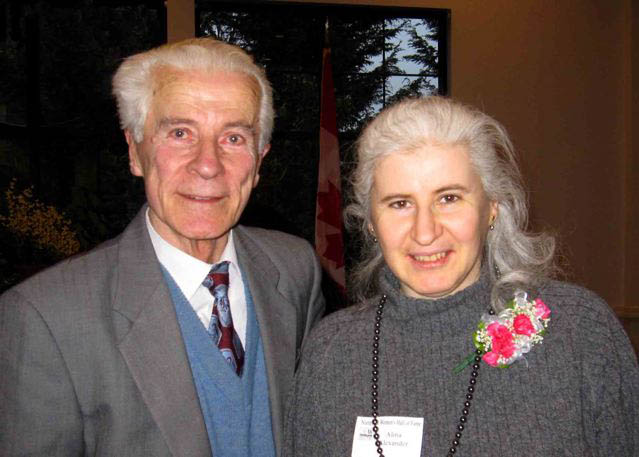 Seven years ago I lost my father to an aggressive cancer which, at first, nibbled at the edges of his life, teasing, taking tiny slivers away at a time, and then abruptly and suddenly flung back the mask and revealed itself for a monster which took three short months to end him.
Seven years of a world empty of my father except in spirit and in memory.
There are times it feels tender, new, as if it was only a couple of months ago, a few weeks, yesterday. And then there are times that it feels as though he had never really been, as though I must have dreamed him, or imagined him. His sulk-when-you-lose-gloat-when-you-win attitudes. His passions. His love of West Side Story and schmaltzy musicals as a whole, and all the old songs that he knew from the Old Country. His chronic nostalgia. His devotion to chess.
And the fact the used to dance with me.
In love and remembrance, here’s something I wrote, a few years ago, about one of those happier times.

I learned to dance from him when I was very little, and this is how – he would play music on our record player, and then he would take me by the hands, balance my feet on his insteps, and, well, dance.
So I learned how to dance by instinct – how to move, and how to accept a partner’s guidance. I learned without counting, without having to figure out steps, without having even to worry about what kind of dance it really was – and to this day my feet remember these lessons, and when I hear a rhythm – ONEtwothree or slow-slow-quick-quick-slow – my feet pick it up and start tapping. I hear a tune and my feet identify it is a polka, or a foxtrot, or a waltz, or a tango.
I’ve been dancing all my life.
In my twenties when I was living in Cape Town I attended a Debutante Ball — as an actual, you know, debutante. All you had to do was collect enough money in sponsorships and you got to be Cinderella and go to the ball. I didn’t even have a boyfriend at that point, and went with a “blind date” guy who didn’t quite know what to make of me – but that’s a different story. Out of some dozen or fourteen of us, ranging in age from 18 to 26, I was the only one who knew how to do a Viennese waltz – and we, the debs, were supposed to open the ball with one on stage with our dates. Therefore there were lessons. We all had to present ourselves – and our partners – at a dance studio where a long-suffering instructor tried to teach us how to be show dancers in a ridiculously short period of time. I found it incredible how tin-eared these girls all were. Couldn’t they hear it? Couldn’t their feet sense it? Couldn’t their hearts soar at the first sweeping notes of the orchestra?
Apparently not.
They had to start with the box – the ONEfront-TWOside-THREEbringtogether box, standing stiffly in their partners’ arms like wooden marionettes, as though they had never been held in a dance before – and they probably had not. Time and time again the instructor would stop the music, clutch his head, and grab me for a demonstration partner.
“No! No! Like THIS!!!”
We kind of did it on the night. I think I was the only one who actually enjoyed it.
Years later at an office party which was advertised as “From the Seventies” but which quickly began to backslide until the DJ was playing pure Sixties rock’n’roll, I recall stood at the side of the dance floor tapping my feet and watching people dance. A complete stranger standing next to me noticed, glanced at me, half-smiled as our eyes met, and said, “Want to dance?”
“Sure,” I said.
He knew his stuff – he knew how to lead. I knew how to be led. We did such a professional number that we quickly became aware that we had had the floor cleared for us, and that everyone else was standing by the sides clapping in rhythm and howling encouragement. The song ended and my partner and I came to a smoothly polished stop, as though we had been dancing together for years.
“And what was your name, again?” he said to me, smiling.
Years after that, I found myself in a packed pub in Dublin on St Patrick’s day. The entertainment for the evening was a troupe of professional country dancers – doing jigs and reels and whatnot.  In between show numbers that the group would do by themselves, they would hop into the audience and drag giggling people on the stage with them to be part of the whole merriment. I went up, twice, to dance a reel with them, making no errors and basically just following everyone else’s lead and falling into the pattern of the dance. Towards the end of the night, one of the professional ladies had to go, leaving the professional troupe one female dancer short.
Without a second’s hesitation the leader locked eyes with me and dragged me onto the stage that one last time – where I stayed until everything was over, dancing as part of the professional group. By the end of the night I had blisters the size of pennies on the heels of both feet, and a heart full of music, and a mind full of memories that will never leave me.
All of that, as illustration, as background.

A lifetime of dancing with my father

In between all of it, at New Year’s Eve parties, at friends’ homes, at family get-togethers, on cruise ships, at my birthdays, I danced with my father.
On a hot summer night in 2005, the two of us met again after several years of being apart, back in the town where I was born, Novi Sad, on the shores of the Danube. We found ourselves – with my husband, who emphatically doesn’t dance, and my aunt – at a café on the quay of the river. Part of the café itself was on the shore, and part was a pontoon floating on the water; usually this meant some riverside cool air, a breath of breeze, but this was a hot summer and even the river was still, the air heavy with humidity and unmoving.
The fauna of the river whom I remembered well from my childhood – the Danube mosquitoes the size of small sparrows, with a proboscis that goes through T-shirt grade cotton without a pause, and made out of India rubber which means that when you swat at one on your arm it sits up and shakes its head and flies away – were out in force. There was a high-pitched whine to the riverside air from their multitudes, and I was going to pay for this night with welts and weals and wild scratching over the next few days – but it was home. I knew these guys. I could handle them.
The café had a small resident orchestra. Sitting at a corner table and nursing cool lemonades, we listened to their music for a little while, and then my father’s eyes wandered to mine, and our gazes locked. He held out his hand. I took it.
I don’t remember what they played. I don’t remember what we danced. But on a hot summer night on the banks of an ancient river, I danced with my father.
We both remember that night. We remember the sound of our steps on the floor. We remember the occasional glimpse of a smiling stranger’s face at another table as they watched us twirl by. I remember his guiding me into a bravura figure or two, and my following his lead.
On a jubilee birthday a few years later, we celebrated by going out to lunch at a local restaurant – full of hurrying waiters, squeals of children, and piped music in the background. At one point they started playing something my feet recognized – slow-slow-quick-quick – and I looked up across the table, and my father was looking at me, and smiling.
“Do you remember the night on the river?” he said
We both remembered it.
And although neither of us rose to dance on this day, in this place… in our memory, there is that night on the river on a hot summer night. And the two of us are dancing there still.
~~~