‘Iron Council’: A fevered dream of a book 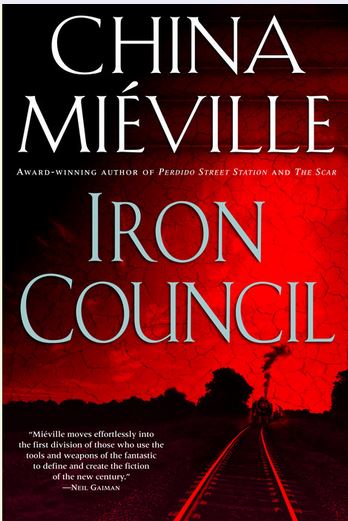 I wrote a review of China Mieville’s ‘Iron Council’ 16 years ago. I remember clearly writing that review. I remember the breathlessness that this book left me with, the way it reaches out and takes you by the throat and doesn’t let go.
“They are always coming”, the last line of the book says, and oh, it’s true – it’s 16 years later and they’re still frozen in their eternal moment in time, still coming, and still taking my breath away.
I saw that ‘Iron Council’ had been newly reissued – it seemed like a good time for a re-read. So I picked it up again and dove back into New Crobuzon.
Then I went back and read my original review. And I stand by every word.
It takes an extraordinary book – an extraordinary writer – to accomplish this.
Take a bow, Mr Mieville.
~~~

The original review from 2004

He’s barely cleared 30, and China Miéville is already an institution. His Perdido Street Station won two prestigious literary awards; The Scar was nominated for more awards than you can shake a stick at, and won the author his second British Fantasy Award. I have absolutely no doubt that Iron Council will follow in their, er…, tracks (and not just because the main protagonist of the latest book, a behemoth belching steam and pumping pistons, will change forever the way you look at a train).
China Miéville is an utter original — he owes nothing to anybody — and he is already in the enviable position where up-and-coming young authors will rejoice to be called “the new China Miéville”. He is a trailblazer. Iron Council is a fevered dream of a book. It feels more like it should have come out of some hot, humid and voodoo-saturated bayou than out of the mind of a writer whom his back-flap blurb has “living and working in London”.
Staid and proper London seems such an unlikely place to have seen the birth of New Crobuzon and its universe.
Not Salvador Dali and Hieronymous Bosch together could quite paint the images that pour out of Miéville’s books, teeming with interdimensional creatures who casually step through veils of space and time, Remade men and women sporting bodies of horses or lizards or steam-driven machinery, an assortment of mages and thaumaturges, flying bird-men and bird-monkeys and heaven alone knows what other flying things, vodyanoi water people, cactus-people, scarab-headed khepri insect-women, the myriad patchwork boroughs, stinking and teeming or elegant and refined, of the city the world knows as New Crobuzon.
Is part of Miéville’s gift that all this is no more than the foundation on which he builds. His characters call New Crobuzon home, and they treat its marvels and its horrors with the same offhand manner that Miéville’s readers would employ when thinking of Chicago, or New York, or, well, even London — it’s home, and everything that happens in it is looked at as normal, everyday, ‘stuff happens’ kind of thing.
Then, before you’ve had a chance to properly catch your breath after inhaling the first searing bit of New Crobuzon’s pungent air, you’re yanked out of it — and things get weirder, fast. You cross paths with golem-making swamp people driven into death and exile by the inexorable march forward of ‘progress,’ monks who pay with parts of their bodies and their souls for arcane secret information, elementals of every shape and kind (you’ve heard of water and fire — did you know about the flesh elementals?), vampiric butterflies, murderous black-toothed inchmen, the twisted landscapes of the Torque and its complete divorce from normal rules of space and time, great turtles carrying entire communities in cities carved out of the shell of its back, oh, the list goes on…
Yet, if you were to distill down the plot of Iron Council into a few simple words, it would be, as Frodo Baggins once said, “There and back again”. 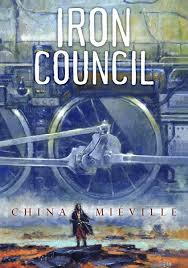 It’s a train journey across the breadth of an unexplored continent. A very strange train journey, to be sure, but that’s what it is. But in Miéville’s hands the journey changes (as all things do) into something rich and strange, until at last he distills something more out of that pure distillate. It isn’t even a journey. It’s a moment of that journey, frozen in time.
The Iron Council of the title is the community that rides, drives, and is defined by the rebel stolen train laid on wild tracks into the unknown. Its odyssey has transformed it into a vision of hope, something that will come to save the afflicted in their final hour of despair, watched for and waited for and believed in for decades, flesh and iron and steam made legend, a sort of leviathan King Arthur and his knights of the Round Table who will wake in the hour of greatest need and vanquish their people’s enemies.
The return of the Iron Council to the city of New Crobuzon and its near certain destruction there while the people are manning burning barricades has a sort of noble grandeur about it, the willing sacrifice of the legend for the lives of the people who believe in it.
But Miéville does not fall into the trap of the easy way out, and the grandeur of that sacrifice is never quite consummated. Instead — in a manner that I will not elucidate further here lest your own enjoyment of the book be spoiled — the last line of the book is “They are always coming”.
The legend lives. The legend without which the fighting spirit in all of us cannot survive, something greater than ourselves, something to believe in and take strength from and know, deep in our bones, that generations from now our descendants will also believe in it and fight injustice and misery and oppression in its name. Miéville has taken a stand, punched a hole in the sky, and screamed “Freedom!” in a voice of thunder.
Quite aside from the intrinsic beauty of this book, from the richness of one man’s imagination, from the way that he uses language and image and the viscera to put together a cloth that shimmers before one’s eyes and almost defies description — this is a message. This book is the Les Miserables of its generation, firing people to flock to the barricades.
Iron Council is a breathtaking book. It is many-layered and dense — and dammit, the man has a habit of using words I’ve never even read, and you know, they make perfect sense where he has casually tossed them. People have accused me of having swallowed a dictionary when I was five years old, because of a similar proclivity — but Miéville not only swallowed four dictionaries, but also at least two comprehensive thesauri. Reading his prose is (quite aside from anything else) an education.
All of this might make it tough for the neophyte to get into — but do it anyway. Dive into the deep end. There is treasure here.