Homes of the dreamers, the tellers of tale

A writer’s house which has been turned into a museum is almost irresistible for me.
In homage and for inspiration I go to look at the books on their shelves, to look out of the same window they looked out of, to wander down the hallways they walked. I look at things they might have owned or touched or that might have inspired some particularly beloved character or incident from a novel I know well.
I go to see their quill pens and their ancient typewriters and to wonder how any novel at all was ever written before the computer, True, I started in longhand myself, but once I got a computer, I have never looked back.
Yes, I know that writing can be done anywhere, and that some of the modern writers might have to have a city tour for a museum instead of a single house, incorporating various coffee shops where they once pecked at the keyboard of their laptop (I am thinking, in particular, about a certain café which, by repute, was the birthplace of some character called… oh… Harry Potter.) But all the same …
Some places don’t care much for such stuff. The house in Bloemfontein, South Africa, where J R R Tolkien was born, has long been torn down to make space for a shopping mall. I did visit the home of Jane Austen and saw letters and music books transcribed in her own hand, Austen’s writing table, and an actual patchwork quilt made for Jane by her mother and which she might have slept under. 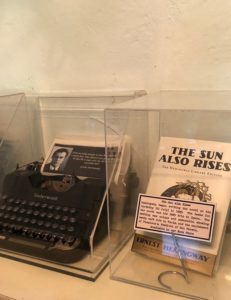 I’ve been to the house of Ernest Hemingway in Key West, where one of the large numbers of the Hemingway Cats, well, their descendants. One of them was, disconcertingly, the first thing we saw, sitting confidently in solitary splendor in the ticket booth. Another, a large orange tom, chose to follow my Hemingway-bearded husband from room to room looking curious and expectant as though Papa might reincarnate any minute.
Out by the pool, preserved by a small square of clear plastic set into the paving, is a single penny. The story goes that during one of her husband’s absences, Mrs. Hemingway decided to amuse herself by making a swimming pool at the house. This proved to be a greater and far more expensive challenge than initially believed because it turned out that the place where the pool was to go required excavating it out of solid rock. Hemingway, upon his return and being presented with the substantial bill, reputedly reached into his pocket and took out a penny, and said “Here, have my last cent!” His wife took it and enshrined it.
I’ve been to the Charles Dickens House – which declares that it will be OPEN AT CHRISTMAS – and really, how could it not be, with the man who wrote classics like “David Copperfield” and “Oliver Twist” and “Little Nell”, with which schoolchildren have been tortured in English Lit classes for generations, being the most famous of all for a little something called… “The Christmas Carol”…? And God BLESS us, every one!
The homes of the creators. The dreamers. The tellers of tales.
I never managed to visit the house of Anne Frank, in Amsterdam, for the same reasons that I missed out on the Egyptian Queen in Berlin – we were in Amsterdam for a short time, and our window of opportunity failed to coincide with the museum’s opening hours. I have a photo of the house, from the street, though. I read the book, of course, when I was still a girl – and it had left an impression.
I remember gazing up at the narrow Dutch house and trying to picture it, trying to imagine what a spirited teenager must have felt, suspended between life and death here, counting her heartbeats, waiting for it all to end… until it finally did, of course, and badly. The house has an aura for me, and that’s without my ever having gone inside – the ghost of a young girl who might have been all sorts of things had she been allowed to grow up and grow old but became, instead, an iconic face for one of the most appalling acts that humanity has ever committed. Anne is both writer and character, a protagonist in her own story, mixed up until the edges between the two blur – and in some ways perhaps it is easier to approach this place if you think of her story as Story, as Meta-narrative, as Pseudo-fiction, someone telling a tale – perhaps about their own life, to be sure, but still, a story.
But the unnerving little aftertaste of bitterness remains, the taste of truth, the thing you cannot ever forget once you felt it burn on your tongue, sear its way down your throat, settle into your gut.
That’s what a museum is for. To make you think. To make you remember. To make you understand.

Home of the most famous someone who never existed

There are also the wholly fictional characters who rate a museum of their own, too – characters so iconic that it is easier to believe that they MIGHT have existed than that they were just the figments of their creators’ imaginations. One of the most famous addresses in London is, and will always remain, 221B Baker Street, the Sherlock Holmes museum. This place is like… a game of Cluedo. You go in with a mental checklist and you tick items off as you spot them. Sherlock’s violin – check. A pipe –check. A doctor’s bag – check. A deerstalker hat – check. Any number of tiny – insignificant for some – details from the stories, from the mysteries, spilling out of drawers, over the mantelpiece, on the bookshelves. You go hunting, for literary clues, for the little hooks which you can use to attach yourself to the tale where you first encountered these things, trying to recapture – oh, to quote Browning – that “fine, careless rapture”.
Stories. Museums are there to hold stories.
Some are real; some are marginal; some are frankly fake (but so beloved that you can overlook that small inconvenience). We are all part of a much larger story, interweaving with so many others – but every so often we’ll pick up some small thread of it and follow its shining lure into some other world, see that world through some other person’s eyes.
“What’s the best thing for being sad?” asks a young character named Wart in a great and glorious book called The Once and Future King.
The wizard whom all the world knows, called Merlin, replies to the future King Arthur, “The best thing for being sad… is to learn something.”
Get thee to a museum. Go look at art made by a stranger’s hand, or an artefact once used by a human being who lived at the dawn of our civilization, or a presentation on how the first electric lightbulb was lit in a house thus bringing the gas age to a halt, or a wonderful old book, or something of deep cultural significance to a culture not your own thus learning more about your species, or a painstakingly recreated room from another age taking you back in time, or a painstakingly recreated bridge from a starship that never existed taking you into an imagined future.

If you enjoy Alma Alexander’s work, you can support her writing with a small monthly contribution at Patreon. Click HERE