How to build a world, word by word 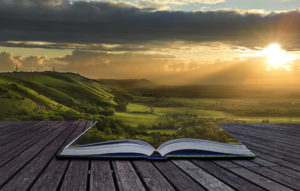 In the beginning, the author created…
When I first began writing historical fantasy, I was inspired by times and places rooted in our own familiar world – but leavened with a dash of the unreal. A world that might have been.
I wrote about locations which might have been identifiable, with greater or lesser ease, as something that had existed in our own history and geography, as we know them – except that I gave such places different names of my own devising, and if I used things that were supposed to have happened in the “true” history of our world I sometimes fudged the precise timing, or the order of events, so that I could create a more consistent story rooted in my own world.
I wrote the book that became “The Secrets of Jin-shei” at white heat, 200,000 words in less than three months. It was set in a China that never was, a mythical land inspired by Imperial China which I named “Syai”.
I’ve been explaining ever since that no, I did NOT set out to write a historical novel, that no, Syai was a place INSPIRED by China, not China itself.
After I had written “the end” at the conclusion of Jin-shei, the history of Syai and the mythical world in which it existed didn’t stop there. It continued, and it blossomed naturally into the events I wrote about in “Embers of Heaven”, a follow-up in the same world of the original Jin-shei book.
It was becoming clear that this was a developing and ongoing story in a developing and ongoing world which had the same kind of timeline as our own did.
While Jin-shei took place in Syai, my world inspired by Imperial China, I moved the the country’s history forward four hundred years for Embers in a time very similar to China’s Cultural Revolution.
A great deal of research was done for both historical periods in our own – our “Real” – world, and my alternate history is built on very solid foundations. In Embers this was particularly important as I was dealing with issues and events which were much more historically recent, and within reach of, if not a living memory for most people, then certainly the memory of a descendant of somebody who had lived through that time. It would have been disrespectful to this kind of recent history and its survivors not to ensure that all necessary research and education had been undertaken, and properly applied to my alternate world that is so very like the China that never was.
This was a real world, to me. It just wasn’t OUR world. It was an alternate universe, with its own rules and laws and history, existing beside and in spite of our own.

Alternate History for a World That Might Have Been 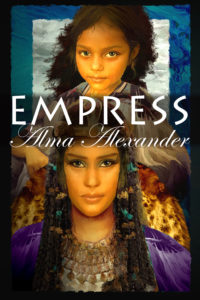 My recent novel, “Empress“,  was set in my alt-historical fantasy of ancient Byzantium, a bit further back in time and in a different part of the same alternate world. Things became looser in terms of what I could do with the material I was working with, in order to make my story flow more smoothly,
I reversed the order in which two documented historical events took place in “real” time and place – but that decision made absolute sense in the context of the world I was creating in my story, a world which was deeply rooted in and inspired by a certain era in the Byzantine empire but which was also a story seen through my own reinvented prism.
I made the studied decision, for example, not to use any known form of a religious faith in this context. That meant working out a complex hierarchy of Heaven and its denizens for the Syai books, with an intricately detailed Great Temple in which these were worshipped (in a manner which was – again – inspired by some real things but which was also organically reinvented for the time and place I was creating.
In “Empress”, I created a system of belief that was similar to, but deliberately not directly using the religions we know as Judaism or Christianity. That meant, once again, reexamining what we think we know as “historical” events or decisions in the light of these newly re-imagined systems of belief.
Just when I became aware that I was literally writing the stories which would build that alternative history into a complete and cohesive whole, setting books in times and places which would somehow fit on the same alternative geo-historical timeline, I’m not entirely sure – but by the time I came to write “Empress”, it was already gelling into that idea. A world explorer in “Empress” talked quite naturally about taking the trade road to a place called Syai. My world was already real enough for that.
More such books are coming. All of them will become integrated into a lush alternative world with its own past, its own current events, its own future. I am literally rewriting the (fantastical) history of our world, novel by novel, building it brick by brick, character by character, word by word.

The first three strands of this are the ebooks of three currently published historical fantasies – “The Secrets of Jin-shei”, “Embers of Heaven”, and “Empress” – and I am now offering them a Book Bundle.
While the bundle is currently only in ebook format, l hope to offer the paperbacks as a bundled package later.
Purchasing a three-eBook bundle also subscribes you to my newsletter, Tea with the Duchess, and it puts your name on a list of people who will be notified first when the next historical fantasy volume appears. One is currently in progress, and at least one other planned – dealing with medieval Balkans, and the shifting empires and loyalties which roiled in that era, with protagonists which are crying out to have their stories told.
Buy eBook Bundle 1 for $10 via PayPal HERE