This summer … come into the light

In the publishing world, there’s a thing called an elevator pitch. It’s what you would say to someone to describe your book in terms of other things that might be familiar and illustrative, and you have only a couple of minutes of an elevator ride to say it.
It’s got to be short, sharp, pithy, and extremely enlightening; it’s a lot to ask of a breathless sentence.
It’s mostly something that ends up describing your book in terms of “X meets Y”, where X and Y are well known, giving your target a quick and dirty idea about whether they’d be interested in picking your book up and what to expect if they did. 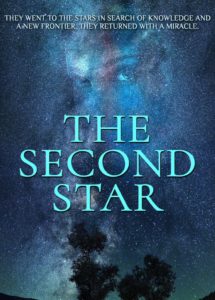 When it came to my own new novel, due out in the summer, my elevator pitch for ‘The Second Star’ is:
“Matt Ruff’s ‘Set This House in Order’ meets Carl Sagan’s ‘Contact’ meets Mary Doria Russell’s ‘The Sparrow’.”
Warning: major spoilers ahead

Let me unpack that for you.
I have admired Matt Ruff ever since I read his immortal and effortlessly brilliant novel ‘Fool on the Hill’. But the extraordinary book of his I invoke in my elevator pitch is ‘Set This House in Order.’ It is a multiple personality book, with a main character who isn’t so much as a main character, singular, as an entire cast of main characters all of whom are personalities living inside a single mind and body. It is luminous, it is technically masterful, and it is a damnably difficult thing to pull off. And he did it flawlessly.
The operative comparison here is the multiple personality aspect of it, because that is central to the storyline of ‘The Second Star’, the exploration of what happens when a human psyche shatters under an unbearable strain and splinters into many different ‘people’. I had a great respect for what Matt Ruff did when I tackled my own character like this, a character whose identity can literally change in the blink of an eye and who has to be shown to have changed through a change in voice or how they present themselves physically. It is a hard one to get a real handle on. It’s like trying to catch fish with your bare hands while standing in a fast-flowing river threatening to sweep you off your feet. But I didn’t just have ONE such character, I had SIX. As another character says, early in the book, “Six people went out to the stars. More than seventy came back.”
That is a fundamental part of this book – the mystery behind that event, why the shattering happened, how it is affecting the human minds and spirits which are being afflicted by it, is it possible to ‘reintegrate’ these fragments and if they are sufficiently self-aware as their own individual selves if they would even wish for such a thing.

To make things more interesting, this isn’t JUST a story of multiple personality disorder and the many new souls which have come into existence because of it. It’s a story of First Contact; our six splintered protagonists aren’t just any six human beings. They are the crew of the Earth’s first starship, and whatever happened to them out there was what precipitated their current psychological fracture. Our mystery… does not have a terrestrial origin.
The more our psychologist protagonist, Stella, discovers about the matter, the more difficult it is for her to come to terms with what she has been called in to deal with. She has a deeply felt responsibility to the six crewmembers – but she also has to incorporate those people’s responsibility to one another, and to the thing that they touched out there amongst the stars.
Stella, caught between her empathy and her duty, is trapped in a difficult place, where truth needs to be told slant, and where it is important just who hears that truth… or consequences could be dire. And much like the protagonist of Carl Sagan’s ‘Contact’, the truth that has to be told… is difficult, and hard to state, and impossible to believe, and the stakes are very very high.

When a Jesuit gets involved

‘Contact’ is a novel of a clash of science and faith, too, and so is ‘Second Star’ – and the third of my triptych, Mary Doria Russell’s ‘The Sparrow’ completes that particular aspect of my own book. A while ago I wrote in a review:
“Twenty years ago, a Jesuit priest broke my heart.
Twenty years later, on this re-read, he did it again.
Emilio Sandoz stands as one of the most memorable characters I have ever encountered in the world of literature. I mean, I put MY characters through hell – but this poor man went to hell, and back, twice. …I loved this man, I suffered with him, I raged at what was being done to him, I fell into his epiphanies and stood breathlessly beside him after he fought his battles and claimed his ragged victories and stared defeat into the face again and again and yet still stood up and fought once more. He was described as a “small man” but in my mind he was a giant – someone who strode through the stars and scattered them in his wake, someone who lived, who suffered, who dreamed, who failed, who transcended, who lost, who dreamed.”
When I created Father Philip Carter and sent him in to do battle in ‘The Second Star’, his existence owed so very much to Russell’s luminous man of God – I instinctively made Father Carter a Jesuit. And the question of faith, explored in my novel, becomes his own question – becomes his being forced to look into a terrible mirror, and confront things that had the power to completely destroy him if he dared to look at them.
And yet he looked them in the eye.
I don’t make it easy – on him, or on the reader who battles through all of this with him. In my review of ‘The Sparrow’ that I quote above, I go on to say:
“These are books that ask some tough questions, and they don’t even pretend that there are easy answers. These are not easy books to read. They ask a lot from you. They demand that you step away from the sidelines and take responsibility. That is why Sandoz broke my heart – because his was broken, and I could not but offer mine up in a solidarity of sacrifice. These might be novels concerned with questions of faith, but it isn’t the kind of gentle candlelight vigil faith that simply gives you solace and absolution. These books will ask you what you think God is, who you think God is, and whether God knows (or has ever known, or even cares) what he is doing, or what is being done in his name. You have to think. These are books that make you feel, and make you think.
These are books which … may be a required re-read. Once every decade, at least. Just to see if your moral clock is still ticking along, and to give a litmus test on how your convictions, sensibilities and beliefs might have changed and altered as life and living pile higher and higher upon your soul.”
And I can almost guarantee that whatever the answer to that is, Emilio Sandoz will once again break your heart.”
I hope Father Philip Carter breaks my readers’ hearts. Just a little. I hope he is as vivid and bright and memorable as Emilio Sandoz was to me. I hope his dark night of the soul, his own difficult questions, shine some light into the shadows that those who discover him in these pages might not even know that they share with him.
I set out to write – as always – a story that was utterly organic, as every story I have ever written down has been. It turned into a complex and intricate novel, a book about the big and eternal questions – about who, or what, God is; about our own immortal souls and their salvation; about what it really means to be human, and where the boundaries of that lie; about whether it is possible to go out into the wilderness where the monsters dwell and ever expect to really come home again unchanged.
It is also about the tiniest of details, about choices that need to be made because of extremely personal convictions, about defying things that you believe to be bad and fighting for things you believe to be good, about friendship, about establishing a connection, about making decisions based on purely selfish concerns as opposed to letting go of those and working for the good of others.
Readers will find what they might seek in the pages of this book, and different readers will no doubt follow the map I have laid out to some very different destinations – my only hope here is those who choose to step into the light of ‘The Second Star’ with me will find something of value in the journey. That somewhere, somehow, somebody will find a scrap of treasure in this story – a shard of light, to take along into their own lives long after they have closed this book and left it behind. Like my six starfarers, this is a book which has many different personalities. I hope you meet them, that you consider at least one of them worthy of keeping as a companion.
This is a story of how humans meet the stars, and find themselves there.
In a world that may be incomprehensibly difficult and rich and strange… I hope that the eyes looking back at you out of this tale are warm, and familiar. Ask your own questions, find your own answers… but come, share the light.
Follow My Blog
[user_registration_form id=”9459″]
~~~