The superheroes you may not know

You are invited into a world with a place called Val Hall, a rest and retirement home for Superheroes, Third Class. If you’ve never heard of it, you can find out all about it in my newest book Val Hall, the Even Years. There’s even a ‘Wikipedia’ article telling you all about it.
But here it is in a nutshell. There are Superheroes, First Class – gods or aliens who have extraordinary strength or powers and are clearly not human. There are Superheroes, Second Class – wealthy humans who compensate for their lack of real godlike superpowers by buying or inventing gadgetry to launch them into that sphere, toys and cars and weapons that lift them into the realm of being superpowered.
Neither of those will ever really need anything like Val Hall. The Gods can’t ever really “retire” and anyway they have their own realms to retire to if they want or need to do. The wealthy humans have more than enough lucre to ensure their own pleasant twilight years. Mine is a world that contains them, sure – but mine is NOT a Marvel Universe. Those Superheroes occur. They do things. They probably make headlines. But I am not telling their stories. 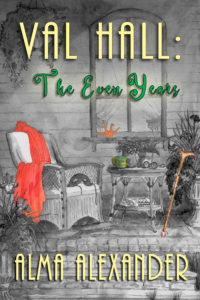 In Val Hall, the Even Years, I am telling the stories of the human beings – the ordinary human beings – who lived unexceptional lives right until the moment that they discovered something special inside them, a gift that lifted them above the norm — an ability to shift time, or see hidden truths simply by touching an ordinary object, or calm storms or natural disasters, or hear music as yet unwritten and guide people into creating it, or help move the world to a different place by walking in a special pair of shoes, or be able to know precisely how much longer somebody had to live.
An extraordinary moment sometimes triggers an extraordinary superhero response. It is a defining moment, but it does not carry guarantees, and in fact it usually creates unexpected problems. The people in whom these powers manifest are often left battling the consequences by themselves. They do not have the means that the rich and powerful may have to shield and shelter themselves from the fallout of their superpower. It happened to them and although they may not understand it they have to deal with the aftermath. Frequently such an event is isolating as family and friends are not able to deal with it at all in any constructive way. Such people could be devastatingly vulnerable, and very much alone.

That is why Val Hall was born – a place where these people could go, and find peace in their own sanctuary, with people like them, the only people who will ever understand.
I am writing about these people. I am writing some of the sharpest and most poignant stories about what it really means to be human at all. I have used the cloak of fantasy and given out superpowers in order to illustrate the tales – but don’t be fooled, I am writing about all of us.
There’s a superhero lurking in everyone, really, and it may be that it is only a lack of a trigger point that has so far left yours sleeping. Val Hall would be there for YOU, though, if they manifested tomorrow.

Third Class is all class

Don’t be misled by that “Third Class” attribute – it is not a slight, or remotely dismissive. It acknowledges the fact that there is a level of ordinariness to the extraordinariness that is being displayed. It acknowledges the fact that underneath any superpower such as I describe here lies a brilliant, vulnerable, strong, gentle, incandescently human soul.
Yes, there are other, flashier, superheroes. Let others write their tales, burnish their legends. I write of human beings who have changed worlds – their own, and other people’s. Val Hall brims with their stories. Any one of those people could be your brother, your grandmother, your sweetheart, your friend. Any one of them could be you.
Welcome to Val Hall.
~~~