Tangling with the Trickster

Let me tell you about my encounter with Coyote.
When I set out to write the Worldweavers books, I wanted to write a story which was an American YA fantasy, an across-the-pond answer to the Harry Potter phenomenon which ruled the YA universe with an iron fist at that time.
I wanted to get away from the usual Eurocentric fantasy and mythology, I wanted to ground the stories that I would write firmly in the New World. The way that opened up for me to do this was by exploring themes in the Native American mythos. Avatars of the gods and spirits from that mythological sphere became characters in my stories. 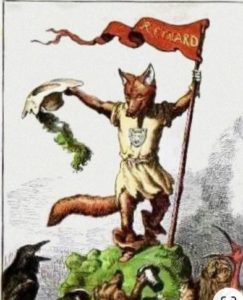 Grandmother Spider (who plays an important role in the creation of the world in several versions of the accounts dealing with this, particularly in the rich mythology of the American Southwest) became a mentor for my young protagonist – and since every light has to have a shadow associated with it, because otherwise the light has no form or feature, the Trickster God, Coyote, ambled onto the stage with a hat-tilt and a wicked grin aimed in my direction.
Initially, he was a simple stereotype, the literary equivalent of a pencil sketch who was there to fill the hole in the narrative which required a touch of malice, a touch of trickery, a touch of the dark side. But then, partly because I have an aversion to writing two-dimensional characters, and partly because there is so much more to Coyote, the Trickster became a powerful figure in my series.
He developed tics, mannerisms and habits like always wearing cowboy boots which were always dusty no matter where he happened to be or how he had got there. He was given to flippancy, telling one of my other characters “finders keepers,” when he made off with something important.
For reasons initially known only to himself, he appears to be working in cahoots with the enemy but FOR the enemy because he is not altogether on anyone’s side, just acting as a catalyst and a facilitator. Grandmother Spider herself tells my protagonist: “Coyote will always be on your side”.
It is the joy and richness of this character that both of those are true, but they don’t cancel one another out. Coyote is something of a Schrodinger’s cat of a character, both good and evil inside that box and you don’t know which until you actually open it up and look. And often even then you are not sure. He is Coyote, after all. He still does the things that he does because he cannot help himself – this is who and what he is, and he is helpless to change that.
But underneath all this, my version of Coyote became larger and deeper, something that forced me to color outside the lines and to ask harder questions, to glimpse all sorts of shadows into which my insights threw only the dimmest of lights, just enough light to know that there was more shadow beyond its reach than I would ever be able to understand or really do justice to within the scope of my story.
The story arc of the original trilogy ran out before I had the chance to fully do justice to Coyote – and I was sorry for it, because in one sense that story was his own as much as it belonged to my protagonist, Thea Winthrop. They both had a hand in shaping it.

The fourth book in the trilogy

Because Coyote was an Avatar, it was at once more freeing and more complicated to allow him to mess with my narrative – the former because he already existed as an underlying figure and therefore did not need to be created from scratch with freshly minted urges and motivations, and the latter because there was so much there that was given, that was considered to be understood, that fiddling with any of it carried its own set of problems.
There was a danger of gilding the lily, if you like, that I would touch him up too much, that he would become the lesser for it. But then I realized that there was one more story to be told in this arc – and tell it I did in the fourth book in the Worldweavers trilogy, as it were, “Dawn of Magic”.
In Dawn of Magic, Coyote CAME ALIVE. This is Thea’s apotheosis, where she faces her greatest fears and has to stand firm in the face of them; this is the story of the redemption of Nikola Tesla, and his transformation into something… that even I had not seen truly coming; but above all this is the story of Coyote, the Trickster, the creature who cares deeply about everything even while he pretends not to give a fig for anything at all, who trusts instinct and not reason and gives his whole existence up to the power of that truth, whose role in creation is to test the mettle of men and to bring out the best and the brightest in them when times to try their souls are thrust upon them, but who does this work with equal measure of playful malice and unplumbed depths of empathy and love.
This is the Coyote I came to know. 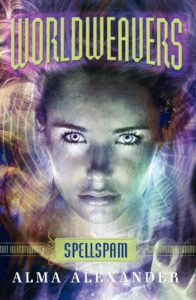 I have several copies of the second book in my Worldweavers series, Spellspam, from the original HarperCollins edition. They will be available for $5 each (includes postage) on a first-come, first-served basis until the supply runs out. Continental US only.
These are paperbacks with my favorite cover of the original trilogy. (The series was upgraded with the addition of a fourth book, The Dawn of Magic.)
In Spellspam, someone is sending out spam emails that contain magical spells. For example, a girl who opened one that promised her the clearest skin discovered that it made her skin transparent. A weight loss email spam offer made another girl anorexic. Spells become more and more dangerous and Thea Winthrop find herself in a desperate battle against a dangerous mage. She is finally forced to make a soul-searing decision to save the world that will haunt the rest of her life.
You can get a copy by emailing me at AlmaAlexander@AlmaAlexander.org with your mailing address. Payment can be by PayPal, or you can send me a check by US mail.