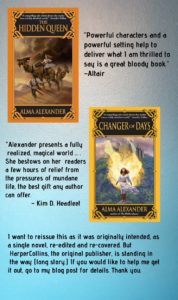 Long long ago in a galaxy far far away, HarperCollins published a story of mine that I had written in an admittedly long manuscript. Too long for them, as it turned out. They put the novel out in two volumes – “The Hidden Queen” and “Changer of Days”.
I was happy to see it published but have always longed to see the story as I originally wrote it – as one novel in one volume.
In the course of time, HarperCollins remaindered the last copies of ‘Changer of Days’, the conclusion to the duology, and the rights reverted to me. I have a goodly number of those books on hand.
But the first book, the start of the story, ‘The Hidden Queen’, remains in print and HarperCollins is holding onto it for dear life. They have about 150 copies in a warehouse and sales are few and far between, not surprising since it is only half the story. Nevertheless, they insist that they are just “following the contract” and will not revert the rights to me until all the books have been sold.
I do have the option of buying the remaining books, after which they will give me back my rights. They’ll give me a discount, but even so it would come to a pretty hefty sum with taxes and shipping. I would dearly like to do this, so if you would like to read these books, which many people consider some of my finest work, I’m asking for your assistance to make it possible.

I am offering autographed copies of both books for $7 each, or $10 for the two, shipping included (Use the PayPal.Me/ADeckert/7 or PayPal.Me/ADeckert/10 ). Since this is a fundraiser, if you’d like to send a little more than the asking price to support my work, I wouldn’t turn you down. 🙂
Once all the shenanigans have been ironed out and I have copies in hand, I will send you those autographed paperbacks (BOTH parts, “Hidden Queen” and “Changer of Days”)
I want to reissue this book in the way it should always have been published – as a single novel, as a brand new, re-edited, re-covered edition, and I would be grateful for any help.
Anyone who contributes to this fundraiser will also be eligible if they wish to buy the new book for 50% off the list price as soon as it is published.
~~~
[mailerlite_form form_id=3]