A dangerous walk through time

Recently I asked David B. Coe, aka D.B. Jackson, about his newest fantasy novel, Time’s Demon. David, an award-winning author, has written more than twenty novels and as many short stories.

Time’s Demon is the second book in your The Islevale Cycle. Tell us more about that. 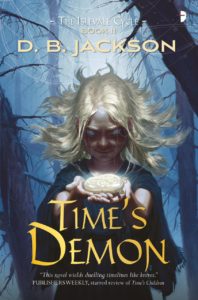 The Islevale Cycle is a time travel/epic fantasy series that tells the story of Tobias and Mara who Walk back through time hoping to prevent a devastating war.
Upon their arrival in the past, however, the Walkers discover that the murder of their sovereign has trapped them in a dark misfuture with the sovereign’s infant daughter, the only survivor of the assassination plot.
They have to keep the princess safe as the assassins hunt for her, and as the two of them seek to reestablish the rightful line of ascension to the throne.

You have an interesting take on time travel in this series.

The catch to all of this lies in the rules I created for my time travel magic. My characters age the amount they Walk. So Tobias and Mara both begin as 15-year-old kids. They are sent back fourteen years and so they arrive in the past in the bodies of 29-year-olds, but with thoughts and emotions that are natural to kids their true age.
And of course, there is more to the story than the central narrative: subplots, secondary characters, a romance or two, lots of intrigue. I wanted to mix my time travel story with all the elements readers look for in a sprawling epic fantasy.
Time’s Demon is the middle book of the series – Time’s Children, came out last October – and like most middle books, it deepens the story with new threats and conflicts, but also starts to resolve some key plot points. Tobias, Mara, and the princess are pursued by the sovereign’s killers, and are aided by a cast of humans and demons.
As the title indicates, this second book focuses on Droë, a Tirribin, or time demon. Of all the characters I’ve ever created, she is one of my favorites. She’s fascinated by human love in general, and infatuated with Tobias in particular. She wants to help him, but she’s almost pathologically jealous of Mara. And since Tirribin are deadly predators, that’s a problem.

It’s different from any other world I’ve created. For one thing, it’s a world of islands and seas, a bit reminiscent of Ursula LeGuin’s Earthsea. The Earthsea trilogy remains one of my favorite works – a touchstone of my early fantasy reading – and though I started work on the series long before LeGuin’s death, I did intend this as an homage.
The world also has a complicated magical presence. In my other books I’ve basically had one kind of magic. It might manifest somewhat differently in each magic-wielding character, but all magic springs from the same magical source. Islevale has several different kinds of magic. There is Traveler magic (time Walking falls under this heading). But there is also what’s known as Seer magic, which is wielded by a different set of characters, and also Binder magic, which is yet another sort.
And Islevale has several different septs of demon – the Ancients, as they’re known. They have magics of their own, as well as their own customs, power hierarchies, etc. So it feels richer than other worlds in which I’ve written.
That said, in other ways, Islevale is similar to my other worlds – its lands have complex histories, competing religions, national rivalries, racial politics. Overall, I think there’s a lot of nuance in Islevale. It was tremendous fun to develop, and as I’ve continued to write in the world, I’ve discovered new elements to explore.

Yes, they were really fun to write. There are several races of Ancients. For the purposes of these books, probably the most important are the Tirribin, like Droë. They appear as children, always. They don’t ever age, because as they spend their years living, they replenish them by feeding on the years of humans. So they’re a real peril – they will kill those on whom they feed. But they have powers as well.
They can recognize misfutures – shifts in history’s progression caused by something done by Walkers. And they also sense the years of their victims; they can tell how old a person is just by the scent of their years, and they recognize Walkers because their years are confused, and soured. They don’t feed on Walkers. Finally, they can be put off with a riddle, but only a good one. Don’t give a Tirribin a bad riddle . . .
Arrokad demons are called the Most Ancient Ones. They’re the leaders of the Ancients. They have powerful magics, that are poorly understood. They will bargain with humans and have been known to give boons. They are also capricious, highly sexual, arrogant, and supremely intelligent. It’s dangerous to bargain with them in bad faith.
There are other Ancients as well – I won’t go into all of them here. But the Ancients play a key role in the Islevale book.

It sounds like you’ve had fun with these books.

More than I can say. When I finished the two urban fantasy series that I had been working on [The Thieftaker Chronicles from Tor, and The Case Files of Justis Fearsson from Baen] I asked my agent what she thought I should work on next. She told me she wanted to see me work on a new epic fantasy, and she told me to “go wild.” The Islevale books are the product of that advice. I’ve pushed myself with this series – the complexity of my plots and my world, the intensity of what I’ve put my characters through, even the prose, which I have polished and honed as never before. As writers, we can always give ourselves new challenges, force ourselves to grow artistically. I’ve done that here, not just because my agent suggested that I do so, but because I want to. The choice is to stand still in a creative sense, and I don’t want to do that.

What are you working on now?

I’m fortunate to be very busy these days, which is always good for a writer. I’m currently revising my first draft of Time’s Assassin, the third Islevale novel. It’s the conclusion of the story that began in Time’s Children and continues in Time’s Demon. I won’t say much about it because I don’t want to spoil any surprises.
I’m also about to embark on my second editing venture – a themed anthology from Zombies Need Brains that we’ll be announcing a bit later this year. And I have a couple of different writing projects that I’m about to begin – a supernatural thriller, a straight thriller, and, I hope, a return to some of the urban fantasy worlds I’ve created. As I say, busy is good.
Thanks for joining us today.
Thank you for having me!
*****
D.B. Jackson is the pen name of fantasy author David B. Coe.
As D.B. Jackson, he also writes the Thieftaker Chronicles, a historical urban fantasy set in pre-Revolutionary Boston. As David B. Coe, he is the author of the Crawford Award-winning LonTobyn Chronicle, as well as the critically acclaimed Winds of the Forelands quintet and Blood of the Southlands trilogy; the novelization of Ridley Scott’s movie, Robin Hood; a contemporary urban fantasy trilogy, The Case Files of Justis Fearsson; and most recently, Knightfall: The Infinite Deep, a tie-in with the History Channel’s Knightfall series.
David has a Ph.D. in U.S. history from Stanford University. His books have been translated into a dozen languages. He and his family live on the Cumberland Plateau.
http://www.dbjackson-author.com
http://www.DavidBCoe.com
http://www.dbjackson-author.com/blog/
https://twitter.com/DBJacksonAuthor
https://www.facebook.com/DBJacksonAuthor/
http://www.facebook.com/david.b.coe