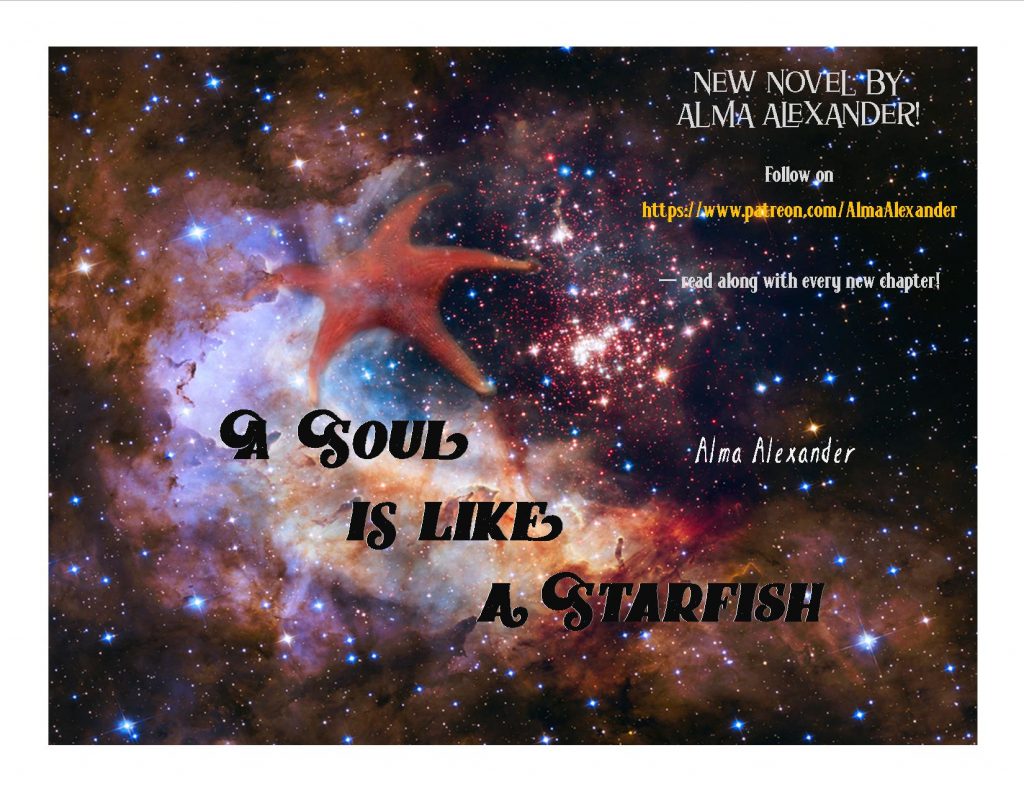 There are times my subconscious almost scares me.
Waking into a new day, I linger for a moment on the shores of the dream sea before I come back to my reality and see what kind of flotsam has been left behind.
Sometimes it’s entire stories. I’ve written and sold at least two short stories which were pure and unadulterated dream stuff, written at white heat at 5 am in the morning when they jolted me fully awake with their insistence of being TOLD right NOW.
Sometimes it’s just a sentence, a word, a perfect thing, a mystery glittering on the shore like a polished gem, but with absolutely zero context as to what it is or where it came from or what it means.
The other morning one of those sentences washed up on the beach. It was oddly apropos, given the context of the metaphor. The sentence was simply this:
“A soul is like a starfish.”
I picked it up, put it in my pocket, woke up, and said to my husband when he brought me my traditional cup of coffee, “I just dreamed this sentence. It sounds like a title of something. I have no idea of WHAT, but of something...”
He – in his usual serene manner that can be utterly maddening at times – simply said, “it will come to you.”
Less than twelve hours later, I had almost two thousand words… of what I initially thought might be a short story. It isn’t. Oh, it isn’t. It’s that invidious Snark that is a Boojum – it was a sneak attack story which wants to be a novel, and wants to be one now.
Even as I type furiously on my keyboard and the first draft comes pouring out, I don’t have the first clue about what the finished story will be. That’s not unusual for me, some of my best work starts out exactly like this.
This thing is … a novel. What’s more it’s going to be a complicated and layered novel with an astonishing number of protagonists. But although I’ve only just begun to draw the blade of the story from its scabbard I can see the glint of true steel start to show. This one has an edge.
The dream tides really delivered.
I will be posting this story as I write it on my Patreon, as a Work in Progress – if you want to read the story as it develops, join up now!
This is the way it begins…
~~~

The Parada had been lost for almost two hundred years before they recovered the ship, drifting in stygian interstellar darkness, and brought her home again. But that was not the miracle.
The miracle was that the crew was still alive.
That was also the problem.

“This meeting is classified,” the grim-faced man in a uniform Stella Froud didn’t recognize said, sweeping an intense gaze around the conference table, catching and holding each person’s eyes for one long, powerful moment. He meant for his words to matter. He meant for everyone there to know that. “You have all already signed documents which state that you will not speak of anything you see or hear in this room to anyone who is not presently in it. The penalties are severe and they will be enforced. Is that absolutely clear to everybody?”
There were wordless nods. The uniformed man frowned.
“I need verbal agreement. Do you understand?”
He went round the table again. Everyone murmured their assent. They had been interested, before. Now at least some of them were frightened. Stella, who had trained to observe the tiniest nuance of human reaction, could feel that fear building behind the carefully schooled expressions of the six people sitting around the table with her. They mostly had control over their features, there were no grimaces or scowls or anything outward like that – but their eyes had changed. The pupils of one woman – Stella rummaged around her brain for the name that went with the face – Dr. Vivien Collins, the only pure academic in the room and probably not used to this kind of military atmosphere – had dilated in shock. There would be more of that to come.
“I am General Aristide Niarchos,” the man continued. “You are all here because our history has just collided with our future, and we hope that you – you in this room – will be able to find a path forward for us through the rubble that collision has left piled in front of us. Dr. Collins, would you please start us off with what is known about the Parada?”
Vivien Collins took a deep breath. Stella could see her hands clutching at the table in front of her in a white-knuckled grip.
“There are lots of things I could tell you about that ship,” she said. “We have the specs right there– ” She flicked a wrist at the screen wall, and it displayed a dense schematic of the guts of a starship, complete nonsense to most of the rest of the people in that room. A further wrist flick started the screen shifting into close-ups of individual parts of the schematic, or scrolling tables full of incomprehensible numbers. Vivien glanced up at the screen with an almost distracted air, and then back at the rest of the group, and with a third flick of the wrist produced an image of a stocky ship floating against space in the orbital shipyard and froze the screen there. “But that’s the Parada,” she said.
“We’ve all seen pictures,” muttered John Lumumba, the engineer. “I’d know that ship...”
Another woman at the table, sitting on the far end, as far from the screen wall as was possible in that room, sat forward, peering at the screen with a squint.
“Wait,” she said, hesitating, “that’s not right. The Gamma Wing of the shipyard wasn’t even built when the Parada was made. Is that a composite?”
Vivien swallowed. “No, you’re right. It wasn’t. Not when the original Parada was in the shipyard. But that… IS the Parada. Up there. Right now.”
The reaction ran down the table like a shiver.
“It’s been almost a century since the last time anyone heard from that ship!”  Alicia Hernandez, the woman who had observed the incongruous Gamma Wing, said. “It’s been nearly two hundred years since it was launched! What do you mean, that’s the Parada? The ship? The actual ship? The real ship? How….?”
“Where did you find it?” John Lumumba asked.
There was a small awkward pause and then the medic in the room, Dr. Ichiro Amari, cleared his throat. “The crew?” he asked softly. He was thinking about their physical well-being, or their extinction, and the state they might have been in when they were found.
But Stella Froud suddenly knew why she was here. It had been something she had been puzzling over ever since she had got the summons and met the rest of the people in this room – all of them might have something to do with the physical mystery of the ghost ship that was the Parada, drifting home from the deep past. They were the body crew, as it were. But only she, Stella Froud, pioneering Psychometric Counselor, dealt in the mind.
_The crew was alive._Somehow, impossibly, the crew was still alive. And apparently disturbed enough, disoriented enough, or possibly insane enough, to require Stella’s ministrations.

Individual pieces of the Parada’s story were laid out in the boardroom as the day unraveled. First lunch and then dinner was ordered in for the people around the conference room table. Different pieces were of particular interest to individual members of the team – but nobody got to ask any questions until the whole story was laid out for them. Stella understood very little of the math – which was presented in detail and which at least two of the people in that room knew enough about to literally gasp as the implications were revealed to them by the numbers. But one number stopped her in her tracks and sent her deep down the rabbit hole. Its potential implications was staggering. She broke the rules and sat up and demanded that the General repeat the last thing he had just said.
“In the two hundred years that the Parada has been out there, its crew has aged by less than three,” General Niarchos said, frowning. “Yes, you heard that right. Our drive was calibrated to run at 90 percent of light speed. For reasons unknown to us, that didn’t quite happen. It ran at closer to 99.99 percent. The tau factor increases by ten in that bracket and the time dilation effects increase exponentially.”
“I don’t understand that,” Stella said impatiently. “It’s technobabble to me. Tell me in real terms.”
“In real terms, at the specifications which the Parada was built for, in the time frame we are talking about, the crew would have aged just over twenty-eight years for the two centuries that have passed for us back here. Which in itself is hard enough to believe. But because their drive kicked into a higher gear, without their sanction or their knowledge, when we found them the crew had aged… by less than three years.”
“So have we found the fountain of youth?” asked John Lubumba with heavy-handed levity.
Stella favored him with a quick scowl, and then turned back to the General. “I can see why they might think I could be of use here,” she said. “That kind of grand canyon can be difficult to grasp or to adjust to. Some psychometric issues might well have arisen. But why do I get the feeling that there’s more to this than just a handful of disoriented starfarers trying to come to terms with their two lost centuries?”
“Because there IS more to it than that,” the General said. “The Parada had a crew of six. If we are to believe the evidence we have before us, well, six people went out. More than seventy returned.”

You will have to wait till the novel is complete and published to read the rest.
Unless…
Patrons will be watching this story unfold on my Patreon page – link below. It is  being serialized as it is being written. My patrons will right alongside me on the journey as the world unfolds around me here and will get a signed copy when the book is published.
If you wish to “join the Patreon” but don’t want to deal with a monthly credit card, there is another t other option which I mentioned elsewhere on this page – PayPal.Me/ADeckert/50 gets you a year’s subscription to the Patreon and you will get everything your subscription would get at the Patreon site, but sent directly to your inbox. Yes, including this new story. 🙂
Visit my Patreon page HERE
So who’s coming with me?