The poet speaks of Love

A little while ago I wrote an essay-review of the movie “The Shape of Water”, which incorporated the poem quoted at the story’s end, attributed to the poet Rumi:
“Unable to perceive the shape of You, I find You all around me. Your presence fills my eyes with Your love, It humbles my heart, for You are everywhere.”
The essay became the most widely read in the entire history of my website, and that quote was one of the things that people searched for and led them to that post.
When I was 17, my father gave me two books of poetry, one by Omar Khayyam and the other by, yes, Rumi, the 13th century mystic poet who was one of the most passionate and profound in history.
I can see both books in my mind’s eye perfectly, but I can’t seem to lay my hand on them. They’re somewhere among the 5,000-plus books in my house, but their exact location is not precisely known at this moment. It is of no matter, these poets are well enough known that quotes from them are everywhere – and I was moved by the response to that quote from the movie to go and dig out more Rumi. 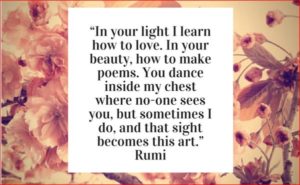 Which turned out to be quite the springboard for further thoughts and, well yes, Rumi-nations.
There’s all kinds of threads to be followed in these quotes but we’ll start with the same one that infused the “Shape of Water” quote – love.