When I was a little girl, my home town library h?d only two sections – children’s, which I blew through in a spectacular fashion, and adult.
We had no such thing as a “young adult” section or concept. 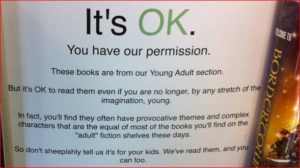 You read the kiddies books until you realized that you were past them and then you went on to read the adult books, those that caught your interest and held your attention. I was reading Howard Spring and Pearl Buck novels (in English translation) before I was ten. And poetry.
When I went moved to Africa and learned English, I read the unabridged John Galsworthy “Forsyte Saga” novels by the time I was thirteen.
The story was the thing that mattered. I read for the story, not for the story that was considered to be ‘appropriate’ for me by some stranger in the publishing industry who had never met me.
Teenagers are a modern phenomenon. In the olden days, a teenager was an adult. Period.
In the middle ages, girls were married at 12 or 13 and became mothers by 14 or 15. Many of them died in childbirth as their young and not fully formed bodies failed to measure up to the stress of giving birth to a real life-size infant. Boys did a man’s work by the time they were fifteen. There was no mollycoddling and no extended coming-of-age as we know it today. The culture of the adolescent, so absolutely prevalent and accepted today, did not exist.
What was perhaps the tipping point into the concept of YA literature came as late as the 1950s and 1960s, specifically after the groundbreaking “The Outsiders” by S.E. Hinton. It had none of the patina of nostalgia that often characterized books about young characters before this time, books written by adults who were reflecting back on a long-past youth. No, this was a novel about the here-and-now – written BY an author who was technically a Young Adult herself, about people LIKE herself, and the immediacy and verisimilitude – not to mention a distinct darkening of theme and ideas – was obvious.
Publishers began to see this segment of readership as a distinct – and new and lucrative – market. YA sections began to appear in bookstores and libraries, for books distinct from books considered to be “children’s books” and distinct from stuff that was considered appropriate for an adult audience.
The range of these books spread across genre – but the contemporary YA novels began to tackle topics that were faced by actual YA readers in their own lives. Topics such as rape, suicide, parental death, murder, drinking, sexuality (both straight and gay), drugs, identity, beauty, and teen pregnancy.
Young Adult fiction, particularly the kind that librarians and booksellers liked to describe as “edgy”, portrayed young-adult protagonists, teens, who were depicted as having to confront social and cultural issues which the readers of such books frequently faced in their own real lives.
The distinctions between works of literature deemed to be ‘children’s lit’, ‘YA’, or ‘adult literature’ have been notoriously fluid and flexible. The fracture lines have deepened, more recently by the introduction of ‘middle grade’ – novels which fall between blatant kiddie books and the threshold of what is considered YA, often assumed to fall somewhere between the ages of 9 – 12.

The Young Adult Library Services (YALSA) branch of the American Library Association, the ALA, defines a young adult in the readership sense as a person between the ages of twelve and eighteen. But once again the borders are arbitrary and flexible, because authors and readers routinely estimate readership ages to start as low as 10, and as high as 25.
I recently wrote the conclusion of what was originally marketed as a fantasy YA trilogy, my Worldweavers books. In the three original books – “Gift of the Unmage”, “Spellspam” and “Cybermage” – my young wizard, who is in her mid-teens, has to meet the challenges of growing up, growing into her gifts.
In the last installment, “Dawn of Magic”, she is 16, and to all intents and purposes, an adult.

Who is my audience…?

I am writing for people like the girl who I myself once was, readers who read for STORY rather than on the basis of which section of the library or bookstore the book was shelved in.
I was allowed to find my own reading level while growing up and read whatever I was comfortable with. My audience is those readers, One of my most cherished compliments came from a book buyer of the acclaimed New York children’s bookstore, Books of Wonder, who told me that I wrote for “readers who already know how to think”.
My books are deep and nuanced – and, for all that they are fantasy, more real. So I am writing for kids like the kid that I was, the kids who are bored with the stuff that accepted wisdom maintains that they are supposed to be reading, who are crying out for stories that are not written “down” to them, stories that are honest, stories that will be just as readable when they are in their thirties without them having to cringe and hide them in brown paper wrappers. It is my highest standard of achievement to write that kind of story, and I have a cadre of readers who are telling me that I have got there with my “younger” stuff.
I am writing for everyone who loves to read – for precocious ten-year-olds like the one I used to be, for fourteen-year-olds who might recognize aspects of themselves, for thirty- and forty-somethings who may smile as they remember something from back when they too were counted in the ranks of those whose chronological age ended in that ‘teen’, to even older readers who may be starting to see signs of a grandchild generation that is starting to blossom into reading and for whom my stories may, in turn, become something that can be treasured.
I am writing for readers. Not for genres.
A story is a story is a story and belongs to whoever chooses to claim it, and live happily ever after…
~~~~~
Wired asked writers to create 6-word SF stories.
Lie detector eyeglasses perfected: Civilization collapses.
– Richard Powers
More from Wired HERE
~~~~~
If you found this blog post interesting, amusing or helpful, then please use the icons below to share it with other writers, readers or the guy next to you on the subway.