There are real places on this earth which resonate with the stories written about them.
A few years ago, my husband and I went on an Alaska Inside Passage cruise, the last of that season. They were shutting doors behind us all the way as the ship left, battening down the hatches for the winter (this is Alaska. Winter is a serious thing here.)
Our trip included visits to several different destinations – Juneau, Ketchikan, Glacier Bay, and more. Most of them were just names to me, new places which I had not been to before that were beautiful, fascinating, incredibly photogenic – oh, I fell in love with Alaska.

But one place we made a stop at was not a new place for me, even though I had never been there before either. Not physically. But oh, I HAD been there before. I had walked those streets in the shadow of the hard men who came for the gold. I had walked here before, beside a magnificent dog named Buck, watching him through the eyes of a writer by the name of Jack London.
The novel “Call of the Wild” may or may not have had scenes set in the exact Skagway streets I now walked – but the Gold Rush began in these streets, this is where the men thronged, this is where they drank and whored, this is the place from which they gathered their belongings together in a ratty backpack and went off into the wilderness of the Klondike, some never to return. 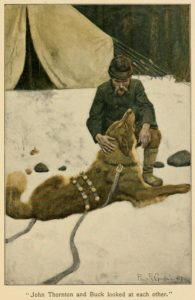 One scene from that book haunted me as I stepped on the shore from a five-star cruise ship, into a highly touristified town, in September and not the dead of winter. Nothing at all was the same as that frozen moment, outside a bar where a half-drunk man made an impossible bet on how his dog could move an unspeakable load on a sled frozen in place on the cold cruel winter street. How the bet was accepted.
How the man sobered up fast when he saw the sled, and the fact that it could not be moved by any effort of man or beast without bursting their heart. How there was no way back, no way out. How the man knelt on the ice, beside the dog in the sled harness, his heart breaking because he knew that he might have killed this animal by his rash act, how he put his arms around the dog’s neck and wept and whispered against the cold fur, “As you love me, Buck. As you love me.”
And then the dog pulled. And nothing happened. And the dog pulled again. And nothing happened. And the dog pulled again… and love moved the frozen load that could not be moved by man or beast alone, and pulled it the required distance, and stopped.
And the man who knelt sobbing by the big hearted dog who had done this miracle, being shaken by the shoulders by rich men offering him a king’s ransom for the dog – the man, looking up fiercely, hugging the dog close, his heart beating against the dog’s, and saying, “This dog is not for sale, sir..”
It was not the Gold Rush. It was not winter. There were no betting men, no flawed protagonists making the wrong choices, no whiskey flowing like water, no snow, no frozen sled. But I walked down the streets of Skagway, and in my ear, a whisper, like a ghost: “As you love me, Buck. As you love me.”
The book – the words on a page – changed this place for me, changed my entire experience of it. That is the power of story. 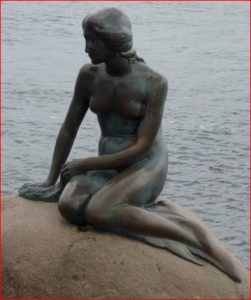 Many years before that, I had ended up with a day and a half to spare in Copenhagen. It is a glorious city, with its architecture and its cobbled streets and its air of casual elegance and its bikes and its brittle sunshine. But I made my way – as all do, who come here, probably – to a place where a particular little statue lives, smaller than you thought it would be, almost incongruous, perched on a boulder above slate gray waters. A statue to a creature that could not exist, did not exist, was only ever a part of a great storyteller’s imagination – the Little Mermaid.
When I was young and reading fairy tales, it was Hans Christian Andersen who held my soul. It was his stories of love and loss, of empathy, of  cruelty, of foolishness and of wisdom, which enthralled me – and remember, this was back in the days when children were considered to be wise enough to deal with the real fairy tales, the original ones, the harsh ones, before Disney poured syrup into them and make them “safe for the children.”
The story of the Little Mermaid which I inhaled as a girl was the original luminous tale – the mermaid who sold her beautiful voice for her legs, whose every step was pain, whose only salvation was to gain the love of her prince… or else, or else, or else, on the day he married another she would die and become sea foam.
He married another. The mermaid’s sisters came for her, on the ship where her prince and his bride slept in their cabin, and told the mermaid that they had sold their hair to the witch who had taken the mermaid’s voice and in return she had given them a dagger. “Pierce his heart with the dagger,” the sisters begged, “and let his blood fall on your feet – and they will become a tail again, and you can come home to us…”
And she takes the dagger, and goes into the cabin where the lovers sleep and hesitates over their bodies… and then bends over, gives the prince she loves a kiss of farewell on the brow, throws the dearly-bought knife and its salvation into the ocean, and waits to die.
If you haven’t read the real story, the original fairy tale, she doesn’t. She becomes something else entirely. Go read the original version.
But there she sits, immortalized in bronze, the luminous creature from one of the fairy tales  that shaped my life.
No, she isn’t real – not even as possibly real as a dog named Buck might have been.
But as you love me, little mermaid. As you love me. You were and you always will be real in my heart. And being here, on this shore, right beside the statue they raised to your memory, I mourn you as I would mourn anyone whom I loved.
The story made you live. And the streets of this city remember your name, given by the hand of a man who wrote your story, who made you immortal.
There are many places on this earth where you can walk in the footsteps of a character you loved, or hated, or simply once knew; where you can step into a world which once lived between the pages of a book you held between your two hands.
Find them. Walk the word worlds. Live the stories that still breathe softly inside of you.
~~~~~
Lonely Planet has explored 10 places that bring children’s literature to life, from a walk through King Arthur country, to digging on Treasure Island. Take a look HERE
If you found this blog post interesting, amusing or helpful, then please use the icons below to share it with other writers, readers or the guy next to you on the subway.